Home » Travel destinations » Europe » What to see in Bruges: a city full of history, art and beautiful views

What to see in Bruges: a city full of history, art and beautiful views 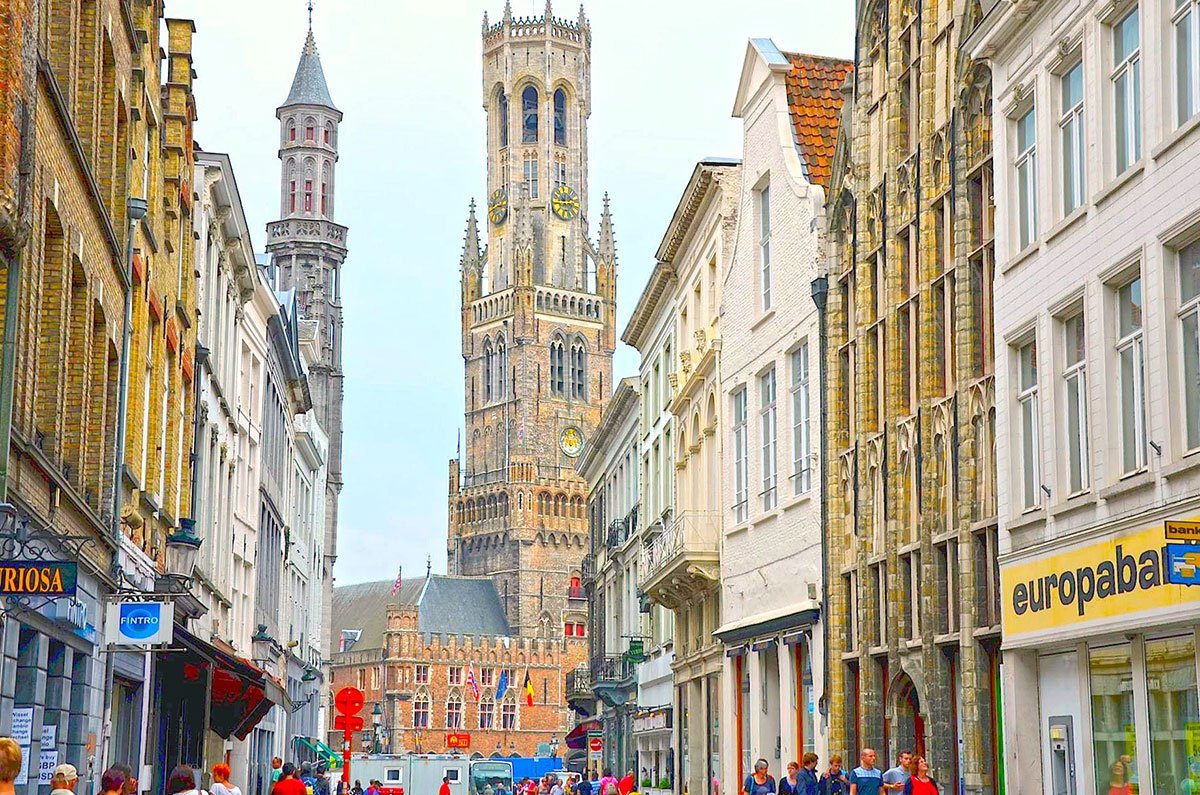 Are you going to Belgium and would you like to know which are the most beautiful cities to visit? Surely you can not miss the charming city of Bruges.

This charming town in northern Europe has in fact preserved much of its original Medieval appearance thanks to the typical brick houses and its Gothic bell towers.

If you want to make a romantic surprise, you must know that Bruges has earned the title of the most romantic city of Flanders and even its gastronomic specialties are not to be underestimated.

Below I recommend some things to do and see in Bruges, the result of my experience. Are you anxious to find out more in detail? 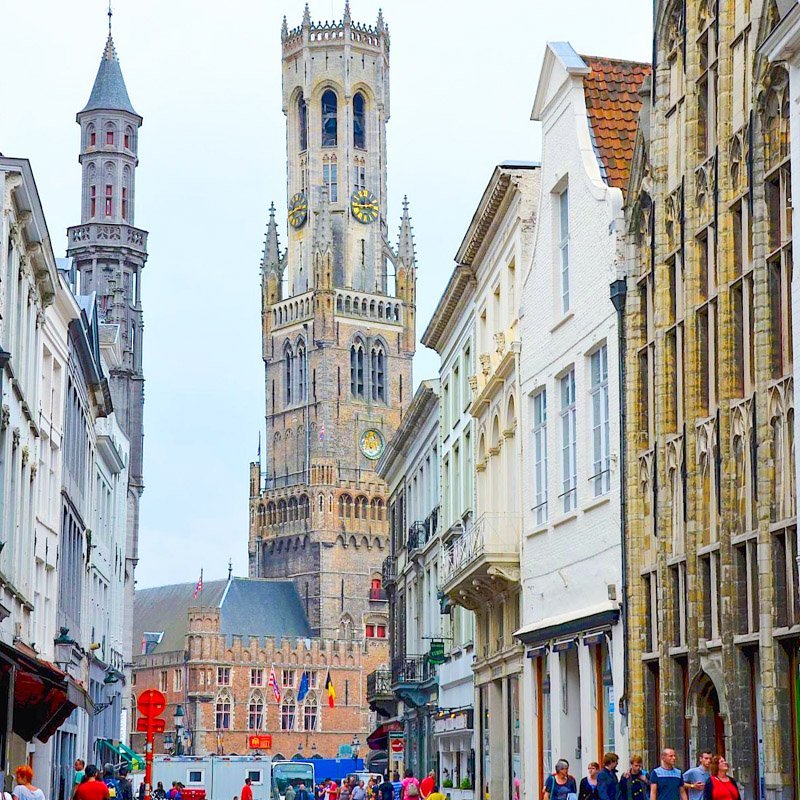 The Markt Platz in Bruges can be defined as the old shopping center of the medieval times. Today this is one of the most important squares of the city and also one of the places of greatest tourist interest.

On this square are situated the typical Bruge houses, with their pointed spiers. Once these buildings were the headquarters of the guilds but today they found space for restaurants and very nice cafes in which I recommend you stop for a short refreshment.

From here it is possible to admire the 13th century Bruges civic tower which has the city’s treasure, as well as the various markets accessible on payment of an entrance ticket. The Belfort of Bruges (this is the name of the massive tower) is 83 meters high and has been declared a World Heritage Site by UNESCO.

To climb up to the top of the bell tower there are 366 steps. I went up there and the view of Bruges from the top was really impressive. Inside the Belfort there is also an ancient clockwork mechanism, it is a carillon with 47 bells.

From the top of the tower, you can also admire the Provincial Palace of Bruges, in neo-Gothic style. While the red brick building is the old post office building. 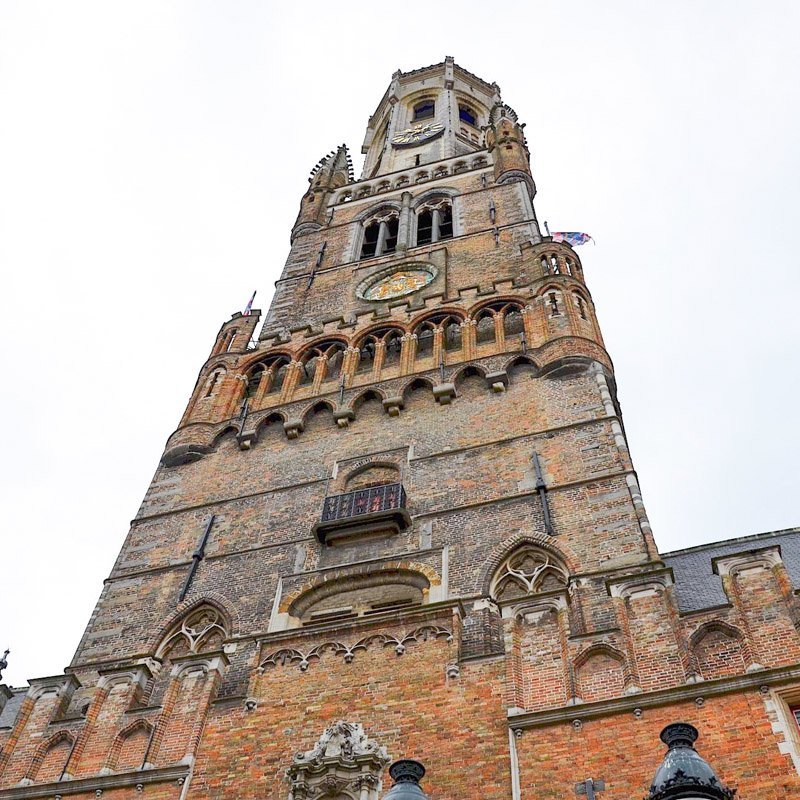 The Burg, the fortified castle of Bruges

Originally the fortified castle of the city stood here. The construction was intended to protect the city’s population from Viking attacks and stands on what was once a major commercial hub in Roman times.

Unfortunately, nothing remains of this impressive building, but today you can admire the Town Hall and the beautiful Heilig-Bloedbasiliek, the Basilica of the Holy Blood, built as a private chapel by the Counts of Flanders in the 12th century.

The upper basilica was restored in the 19th century and inside you can find the venerated relic of the Blood of Christ. Recommended a visit to the lower chapel, much barer but also more authentic.

The Bruges town hall dates back to the 14th century and is one of the oldest in the Netherlands. Inside, I suggest you visit the Gothic Room which dates back to 1400 and is covered with wall paintings from the late 19th century. that illustrate the most important events in the history of Bruges. 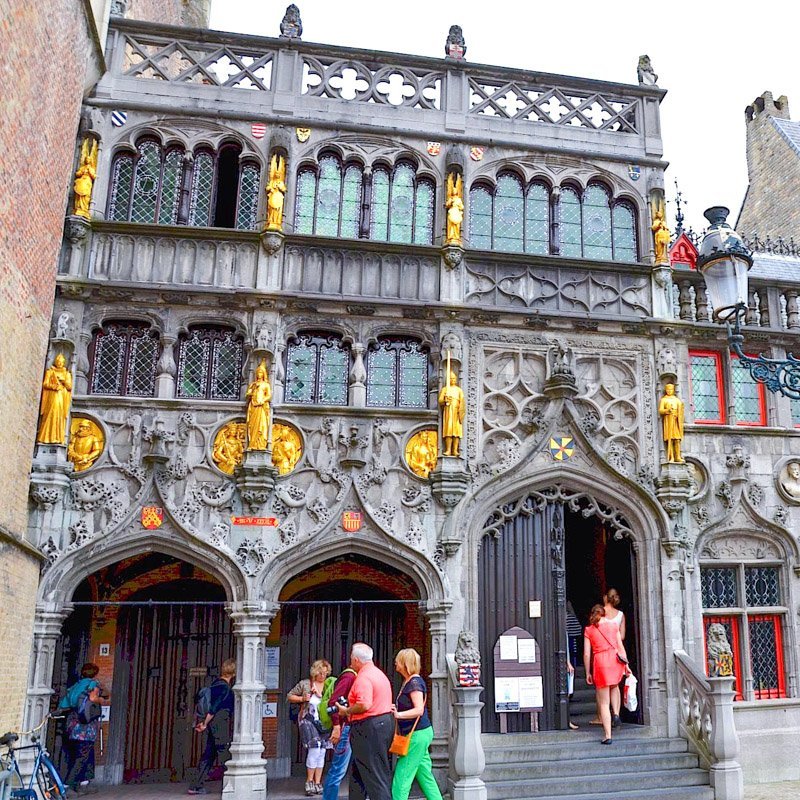 A Madonna made by Michelangelo in Bruges

It seems incredible but in the beautiful church of Our Lady in Bruges, there is a beautiful Madonna with Child by Michelangelo.

The work was commissioned to the artist by the merchant family Mouscron for their chapel in Bruges. The Mouscron were doing business in Florence and came in contact with the protector of Michelangelo, who had to act as an intermediary. The Madonna of Michelangelo of Bruges was entirely made of Carrara marble. Today it is placed in the right aisle and protected by a bulletproof glass.

Impossible not to notice the massive 122 meter high brick tower. This structure, built in Brabant Gothic style between the thirteenth and fifteenth centuries, is an example of the great skill ability of local craftsmen.

Another noteworthy monument is the Cathedral of San Salvatore, the oldest brick church in Belgium. It was begun in 1127 but unfortunately, it was restored over the centuries losing its original charm. 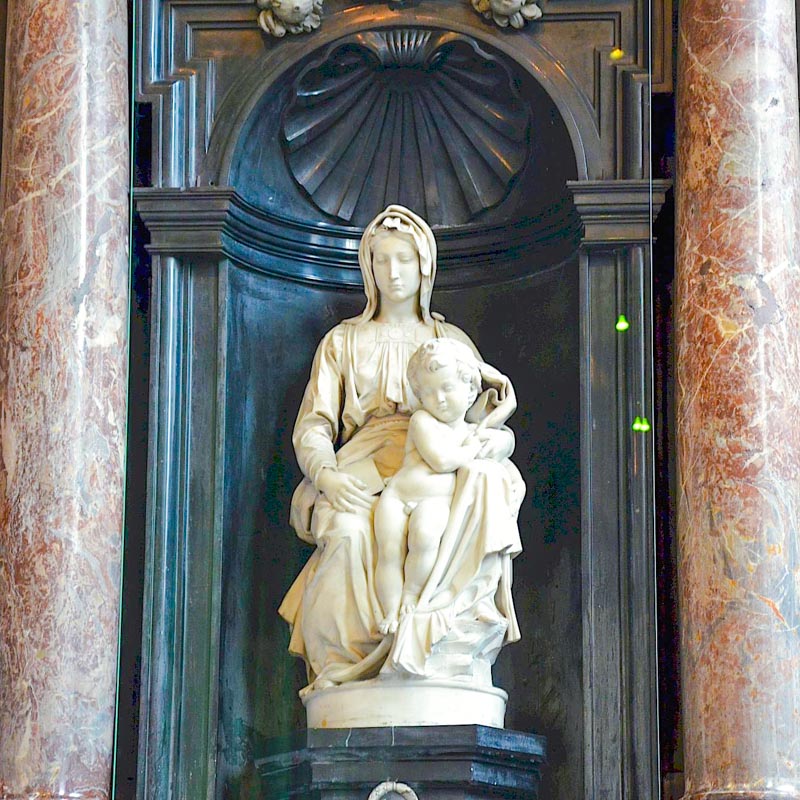 The hospital of San Giovanni in Bruges

When I was considering what to see in Bruges, I was unsure whether or not to visit the San Giovanni hospital.

As soon as I entered, I was happy to have put it on my list of attractions to see: it is a structure of the eleventh century that gave shelter to sick, pilgrims and the poor for centuries. The whole of the buildings and the wooden interior amaze for their simple beauty, as the part of exposure on the surgical instruments of the past certainly frightens.

Today, this structure houses the Hans Memling Museum, a Flemish painter of the ‘400, which preserves some of the most important masterpieces. His works are kept inside the hospital chapel.

Among the works that I liked the most, there is certainly the Teca di Santa Orsola. It is an ancient wooden casket containing the relics of the saint formed by six panels that tell the story of the young martyr. 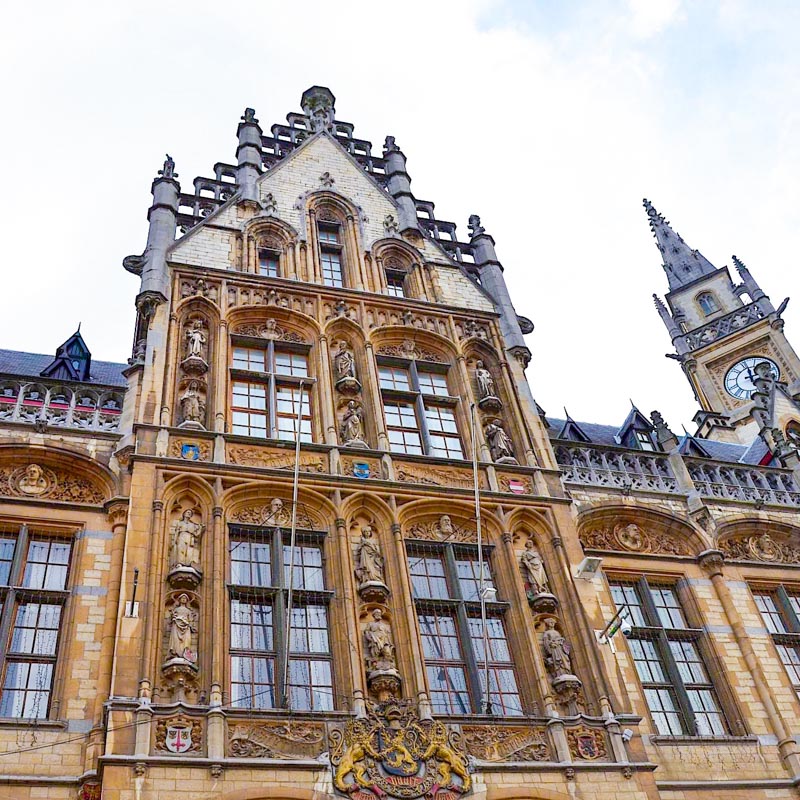 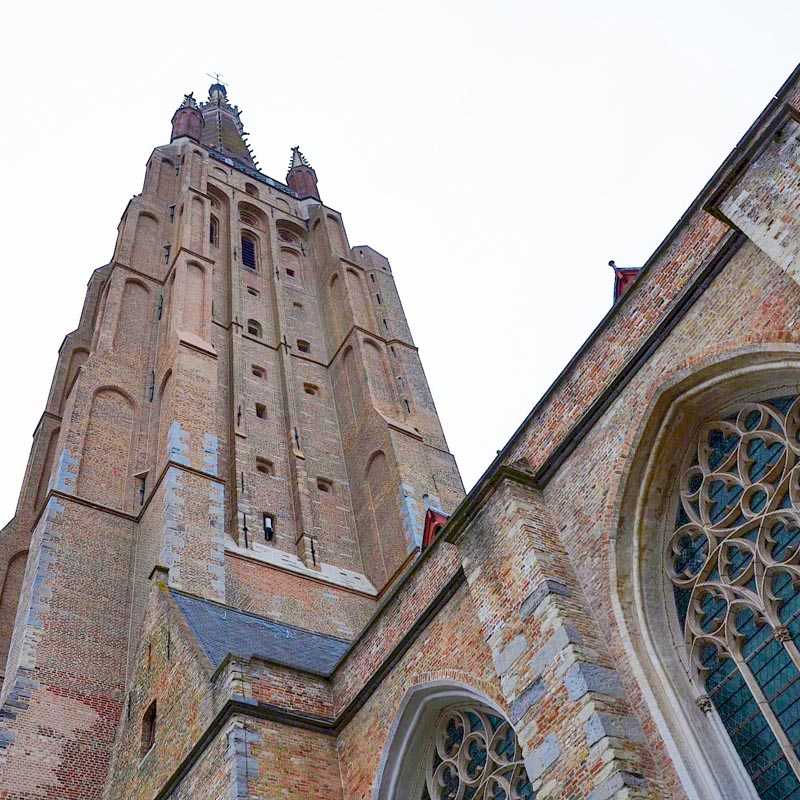 What to see in Bruges? Museums!

Are you looking for what to see in Bruges? I recommend its museums! There are many: the Groenigemuseum, for example, is mainly dedicated to Flemish art. Another is the Gruuthusemuseum is dedicated to antique furniture and art. At the diamond museum instead, it is possible to see how they are worked and the differences between the various stones.

There is even the potato chip museum! I do not know whether to recommend it or not because I have not visited it. 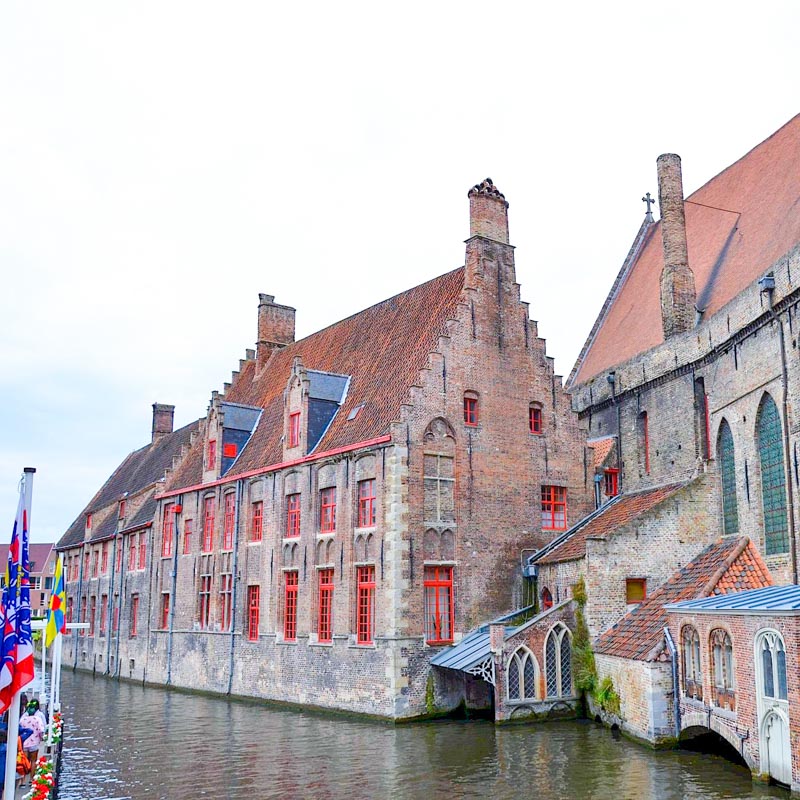 Bruges is beautiful, but…

Bruges is a true jewel of northern Europe but has the disadvantage of having become a “too” tourist destination!

Because of its modest size, if you visit in the summer often you can not walk the streets because of a large number of people. In addition, the channels and views are beautiful but taking a picture is almost impossible due to the long queues.

Of course, it can not be said that it is not worth it, but perhaps it is better to choose a less crowded period, in spring or autumn.

I advise against visiting it in winter because the leaden sky, the lack of flowers and the cold make it much more gloomy and melancholic, recommended only to those who want to see it in its true light of the northern city. 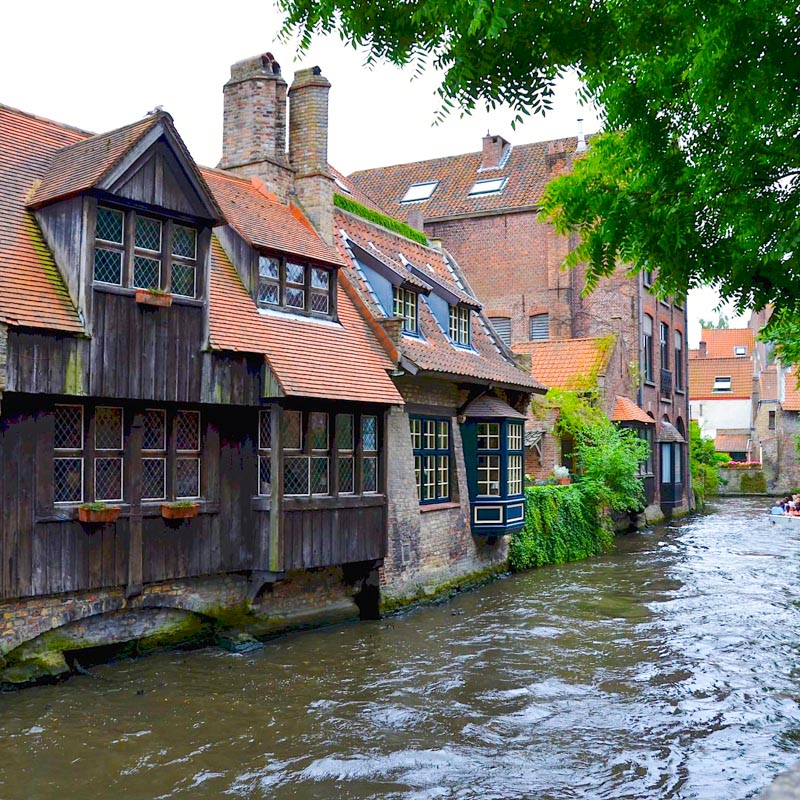 How to get to Bruges

If you want to get to Bruges by train, you should know that the city is very well connected to Brussels, which is about an hour away. I took an integrated ticket for the whole day and I also took advantage of it to see the beautiful city of Ghent (which I recommend).

Bruges station is just outside the historic center but just walk for a few minutes that you will immediately find yourself among its beautiful cobblestone streets or wander through its canals. The city of Bruges is a veritable open-air museum and that is perhaps why Bruges is considered the Venice of the North.