Home » Travel destinations » What to see and do in Dusseldorf in one day: here is my experience

What to see and do in Dusseldorf in one day: here is my experience 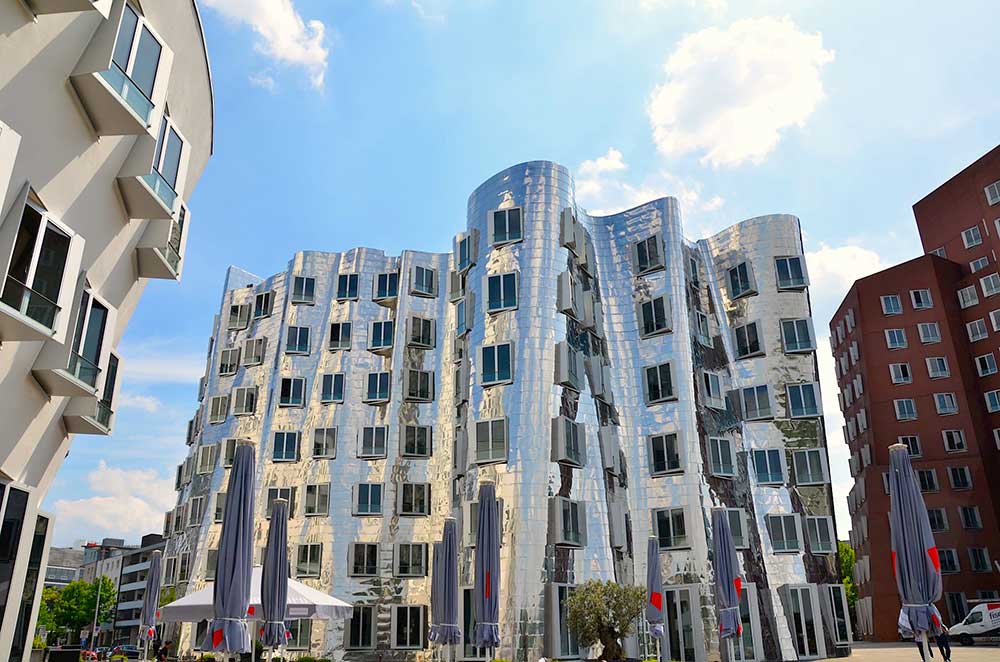 Are you doing a tour of Germany and are you curious to know what to do in Dusseldorf in one day? You are in the right place!

Dusseldorf is one of those cities in Germany that has lost most of its monuments and its history. The cause of this disaster occurred during the bombings of the Second World War. But the Germans, once touched the bottom, were able to get up strongly.

In this article, I will briefly illustrate what to see and do in Dusseldorf in a day to avoid wasting time wandering aimlessly.

Find out what to see in Dusseldorf and why you should really do a little artistic tour.

Fernsehturm: the tower of Dusseldorf

The first thing that catched my eye once I arrived in Dusseldorf was the Fernsehturm, the television tower. It is not the Eiffel Tower of Paris but it is the highest point from where a tourist can admire the landscape, about 200 meters.

If you want to climb to the top of the tower of Dusseldorf you must know that the ticket price is 4 € but it is really worth it. The beautiful view from the top of the Fernsehturm is breathtaking and also puts a little creepy. In fact, the walls aremade of glass but are also inclined and give the impression of falling into the void

If you are not afraid of the altitude and you want to take a “scary” piscture on the glass windows of the tower of Dusseldorf, this is absolutely one of the things to do in Dusseldorf in a day. If you suffer from vertigo you can enjoy the view at a safe distance. 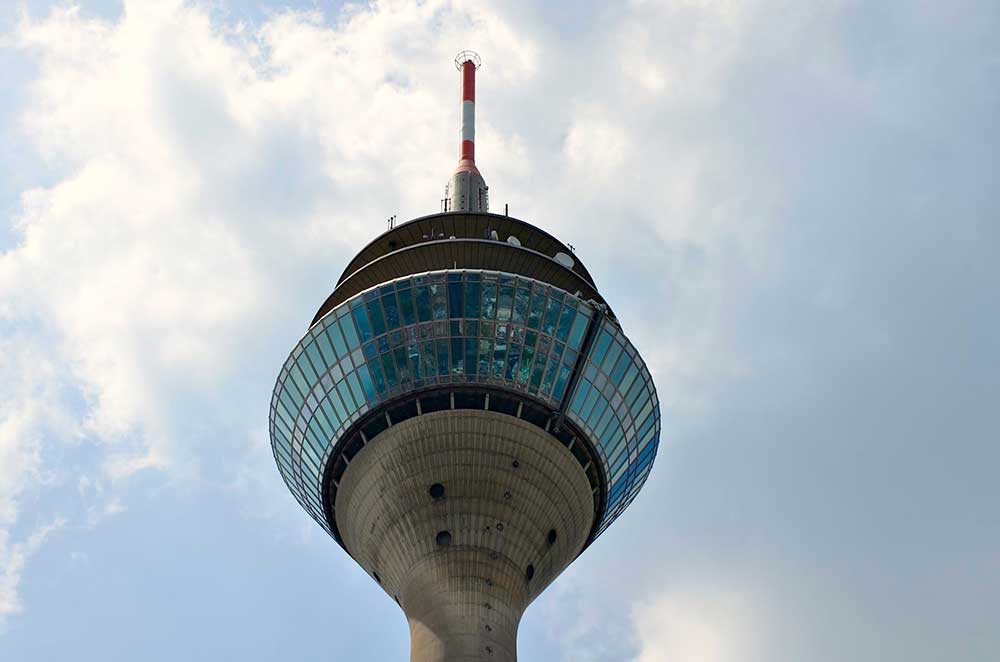 Architecture in Dusseldorf: the “family” of Frank Gehry

Dusseldorf has lost much of its artistic heritage but this does not mean that there is nothing to visit.

Very impressive are the numerous masterpieces of contemporary architecture present near the television tower. Features are the structures of Frank Gehry. This famous architect has designed three complexes in different shapes and materials, with the purpose of representing the family.

The buildings built in Dusseldorf by Frank Gehry all have a deep symbolic meaning.

The structure in the middle represents the child. The building is covered with reflecting materials that not only spread a silver light all around but reflect the two immediately adjacent buildings. This artistic choice symbolizes the child’s ability to learn and reproduce the teachings of the parents.

Next to him is “the father” with dark and angular characters and the “mother” of white color and sinuous features. 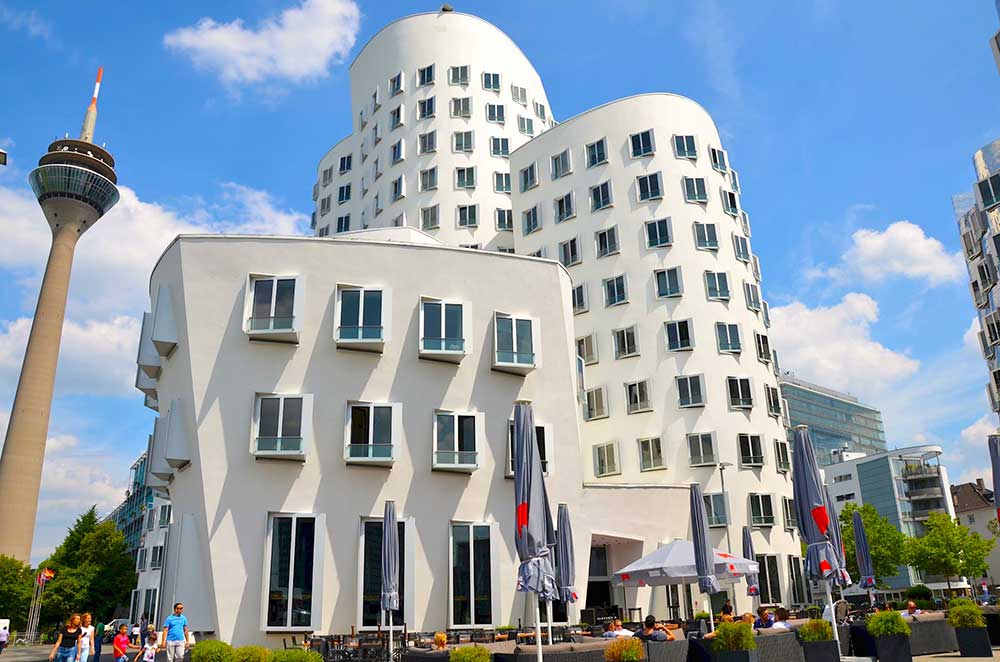 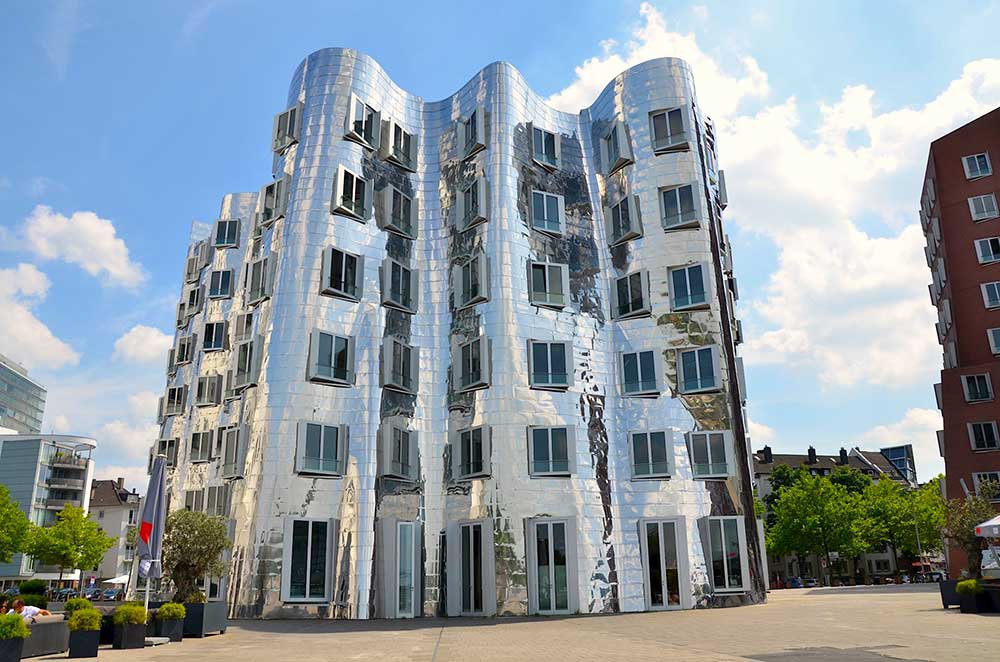 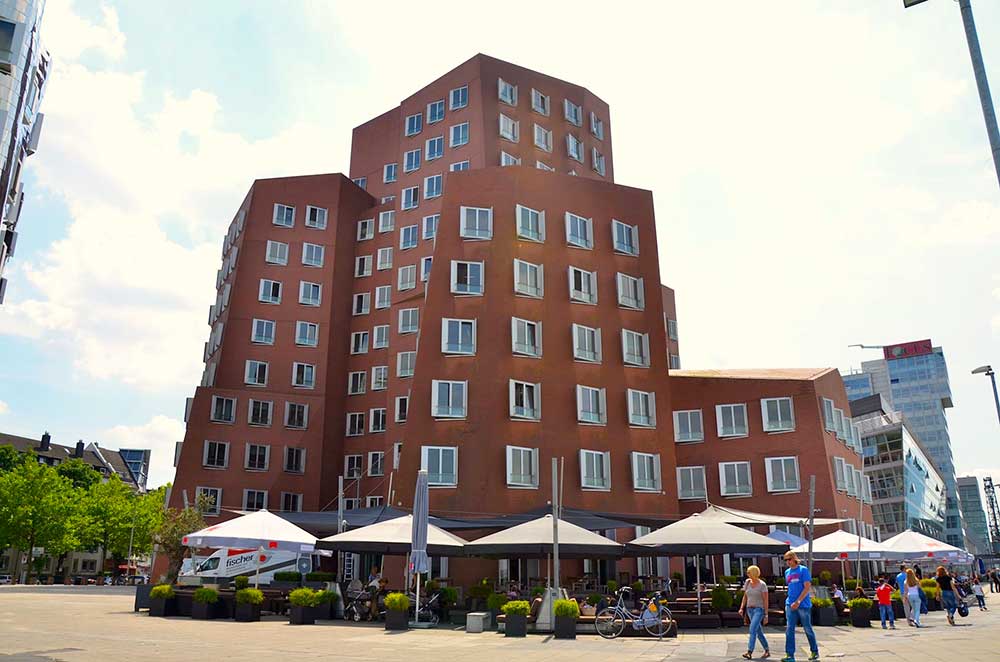 The Flossis of Dusseldorf not to be missed

On some buildings in Dusseldorf, you can notice the elastic figures with a human form. These are the so-called Flossis of Dusseldorf, created by the artist Rosalie, pseudonym of Gudrun Müller.

These “creatures” have literally invaded the facades of some buildings of the city of Düsseldorf in Germany. One of the palaces invaded by the Flossis is the “The Roggendorf House. This building is just a few steps from the banks of the Rhine and the architecture of Frank Gehry.

It is impossible to not notice them!

Rosalie’s Flossis in Dusseldorf are made with a special resin capable of resisting even at low temperatures.

I find it fantastic and it is a splendid example of reusing existing structures to create something new. 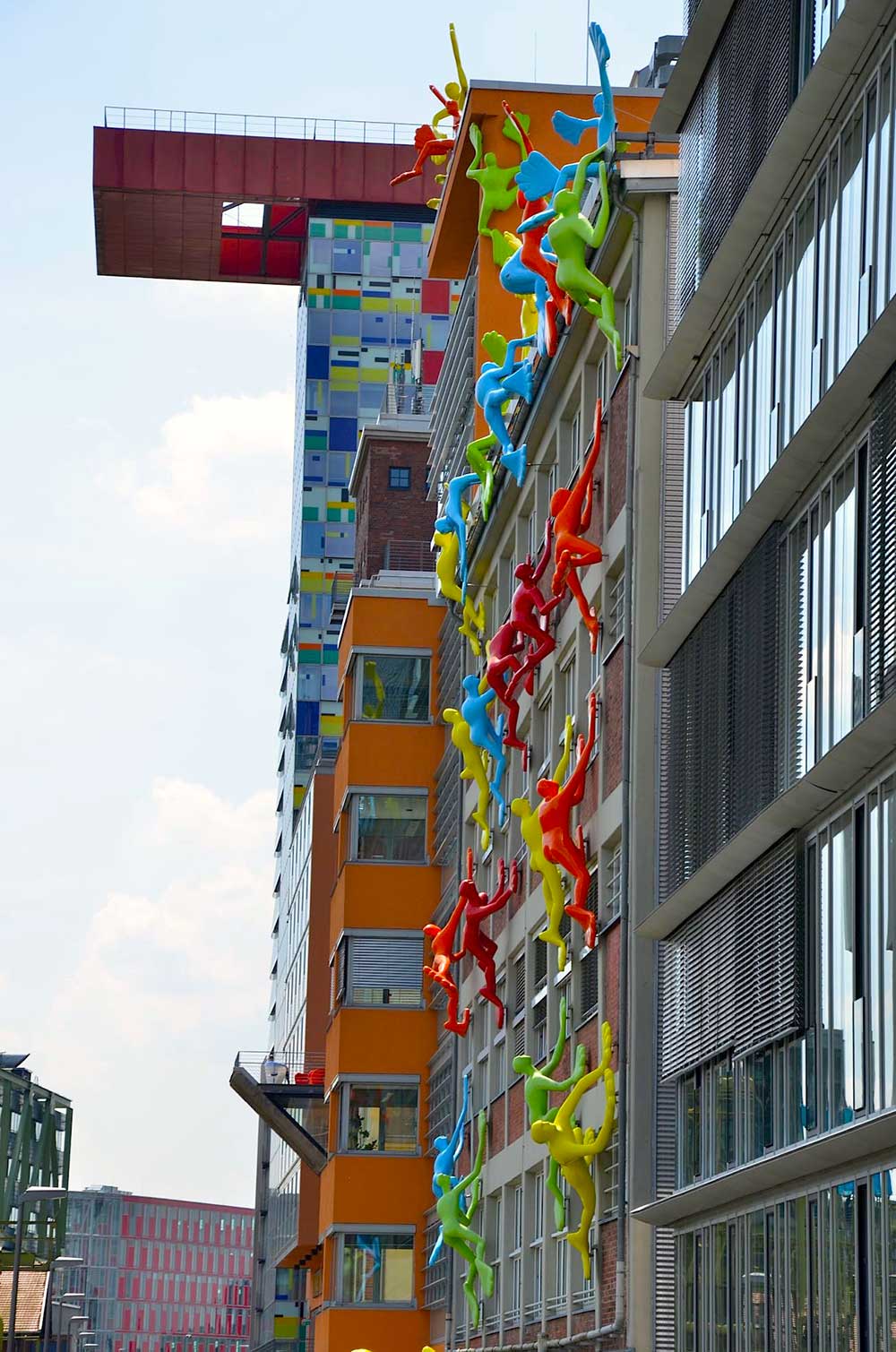 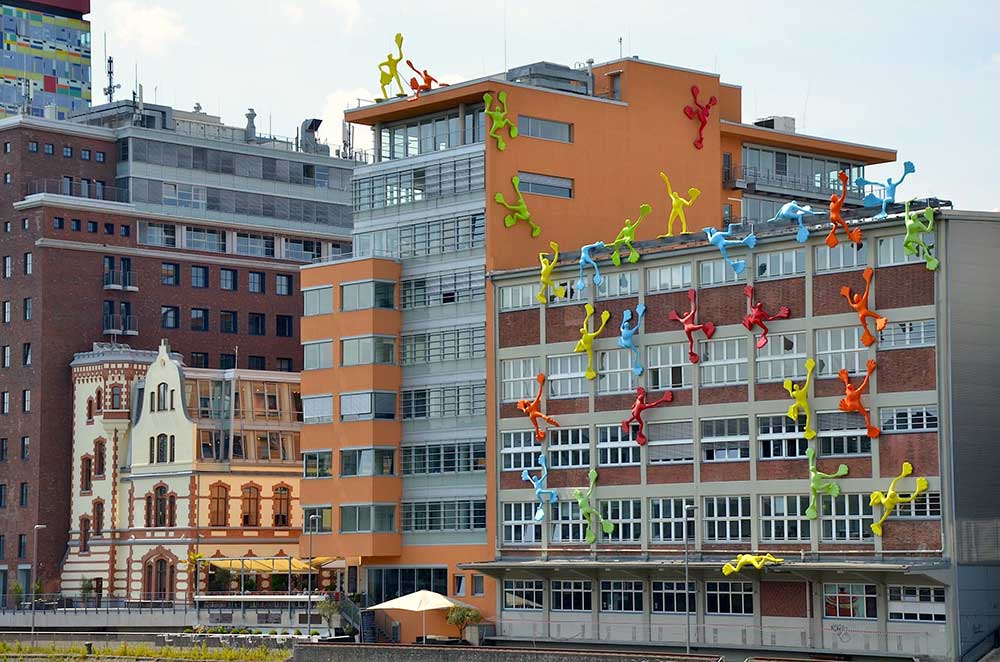 The ancient Dusseldorf: the historical center of the city

Despite the bombings suffered during the Second World War, a small portion of the historic center of Dusseldorf has been saved: it is the Altstadt, the old city.

In the center of Dusseldorf you can find plenty of restaurants, pubs and clubs of all kinds. In addition, one of the city’s few historic buildings is preserved here: the Rathaus (town hall), built in 1573 on the Marktplatz.

In short, the ideal post to take a break during your tour in Dusseldorf! 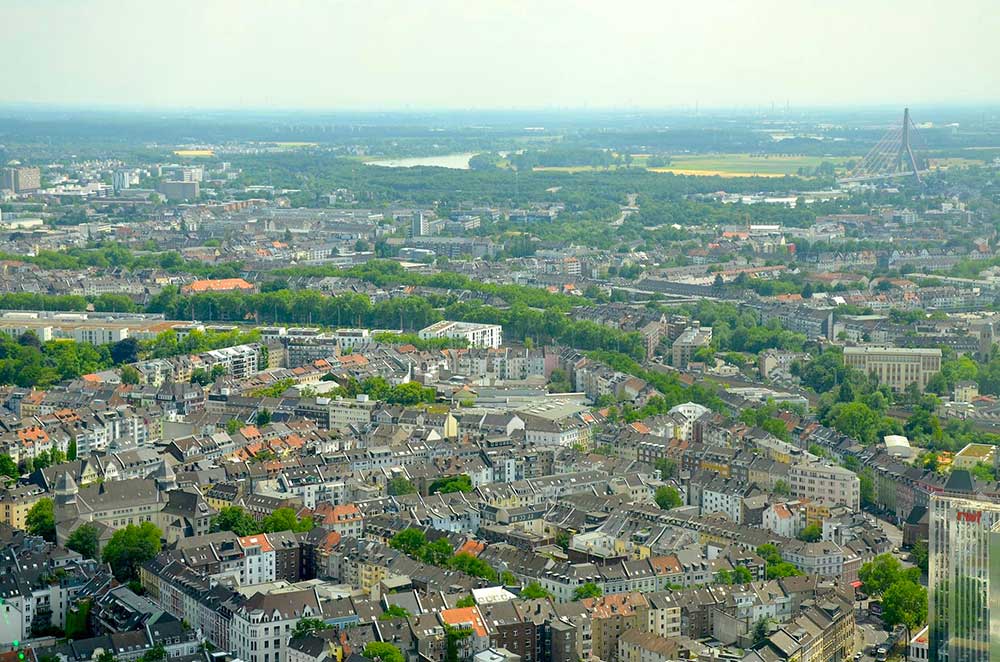 How to reach Dusseldorf? It is very easy!

Dusseldorf can be reached by plane or train. The city’s main station is not far from the television tower.

In winter it is a fairly cold city, so the best season to visit is spring / summer.

There are many other attractions to visit, such as the castle Benrath, various museums including the Kunstpalast and the NRW Forum (the forum of the North Rhine-Westphalia region) but I have not visited yet.

The next time I go to Dusseldorf I will tell you more ! 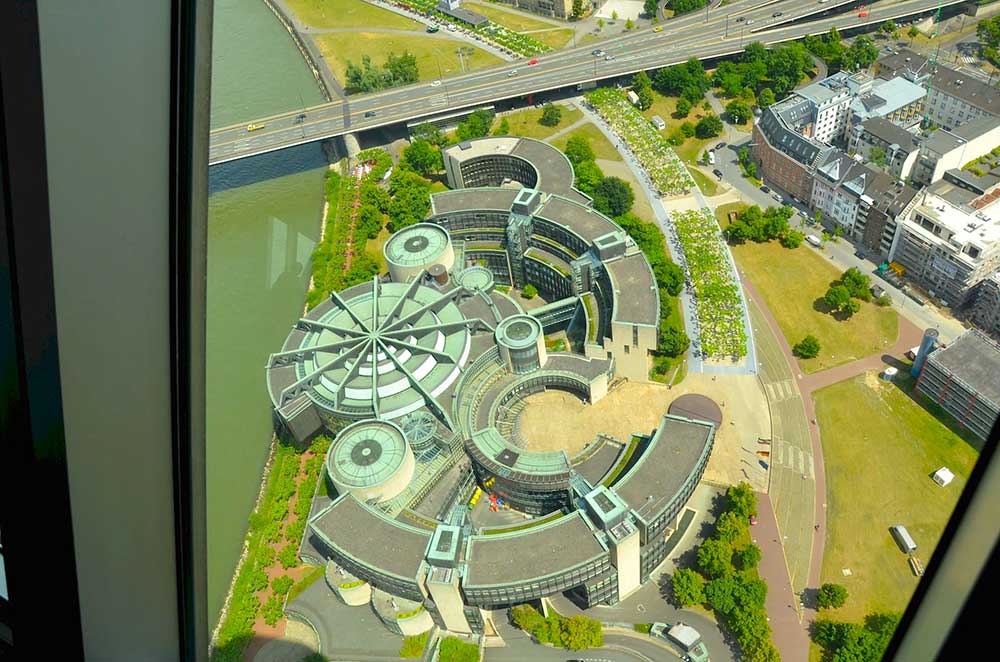 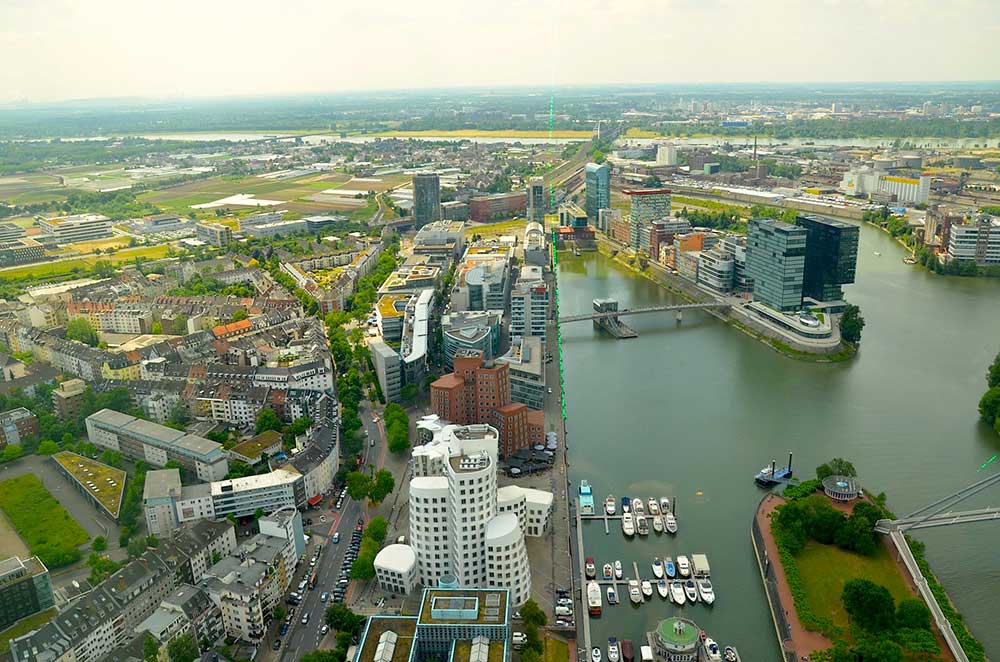 Have you ever visited this city of Germany? What struck you the most?

Write me your impressions and suggestions in the comments!