Home » Travel destinations » Europe » What to do and see in Ravenna: why is this city so famous for its mosaics?

What to do and see in Ravenna: why is this city so famous for its mosaics? 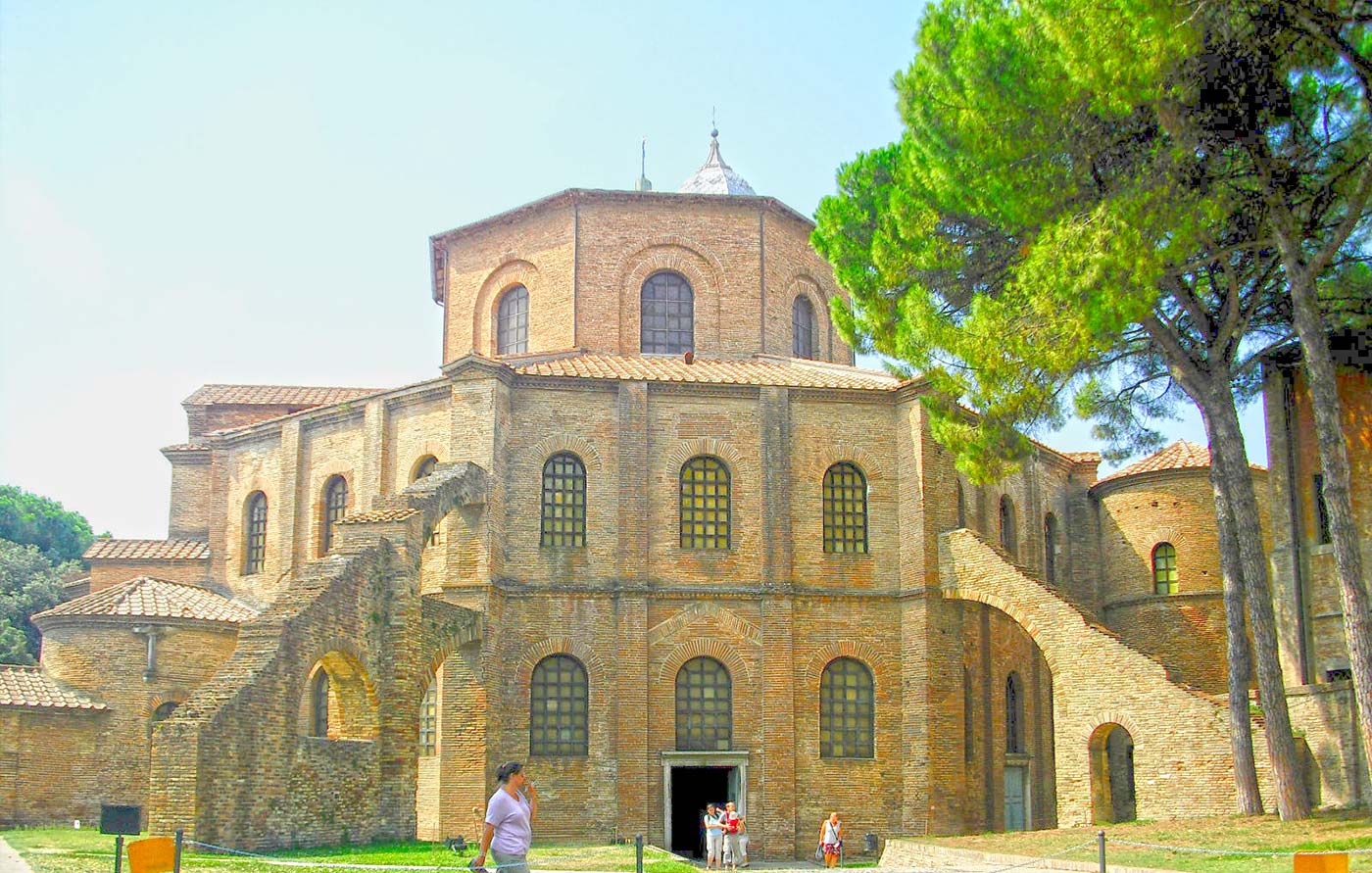 Ravenna is an incredible city that preserves numerous ancient art treasures. It is unfortunately unknown and obscured by the most famous Italian cities of art. It was the capital 3 times and for 3 different very important empires: the Western Roman Empire, Theodoric King of the Goths and the Byzantine Empire in Europe.

Thanks to its strategic position, Ravenna became a thriving center of religious and cultural exchanges, a crossroads of artists between East and West.

Today its glorious past is testified by 8 monuments included in the UNESCO World Heritage list, its beautiful basilicas and its baptisteries that make it the city with the richest heritage of mosaics dating back to the fifth and sixth centuries.

So now you have no more excuses and, if you are in Emilia Romagna, you absolutely have to spend at least one day in this beautiful city.

Here’s what to see in Ravenna with its most representative monuments, its attractions and its history, from the roller coaster to the sea.

Before discovering what to see in Ravenna, I’ll briefly tell you about his incredible story. This city became very important at the end of the fourth century after Christ when Honorius, emperor of the Western Roman Empire, moved the capital from Milan to Ravenna under the threat of Alaric, king of the Visigoths. At that time Ravenna was in a better strategic position than Rome: surrounded by lagoons, it was unassailable.

Ravenna capital until the official end of the Western Roman Empire.

In the sixth century it became the capital of a “barbaric kingdom”, under Teodorico, the enlightened king of the Ostrogoths and, later, was conquered by Justinian, Byzantine emperor.

In the Middle Ages it was a municipal city and remained mostly under the guidance of the archbishops, who were among the most important in Italy. Today Ravenna is famous as a city of art and for its amusement park Mirabilandia, which offers many attractions (guaranteed chills on the Katoon!). 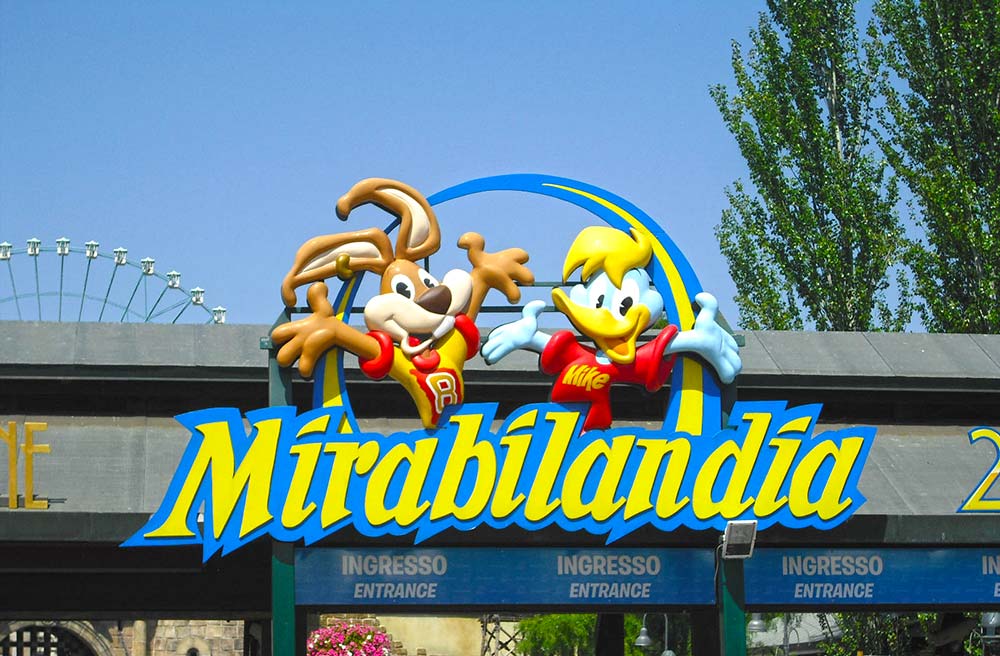 The baptistery of the Orthodox and Aryans in Ravenna

Among the things to see in Ravenna there are undoubtedly these two monuments.

The Baptistery of the Orthodox and the baptistery of the Arians bear witness to the different religious inclinations that succeeded and coexisted in this ancient capital. Today they still preserve some of the most beautiful mosaics in Ravenna.

The baptistery of the Orthodox or Neoniano, was built at the end of the fourth century by Bishop Urso together with a cathedral, now disappeared. It has a very simple octagonal shape but its real treasure is the beautiful mosaics of the dome, rebuilt in the fifth century by Archbishop Neone.

The mosaic shows the typical characteristics of the Ravenna style. The decoration is composed of three concentric centers: the first shows the etymology, the second the apostles and in the center there is the baptism of Jesus (the strange figure near Christ is the representation of the river).

After the end of the Western Roman Empire (476), Theodoric ruled over a good part of the Italian territory starting from 493 and made Ravenna its capital. He drained and reclaimed the marshes around the city and founded the Goti quarter, with a church and baptistery now called the Arians, which takes its inspiration from the Orthodox.

The mosaics of the dome of the Arian Baptistery represent the Apostles and the baptism of Jesus, but the style is very different, because the art was changing from “Roman” to “Medieval”. 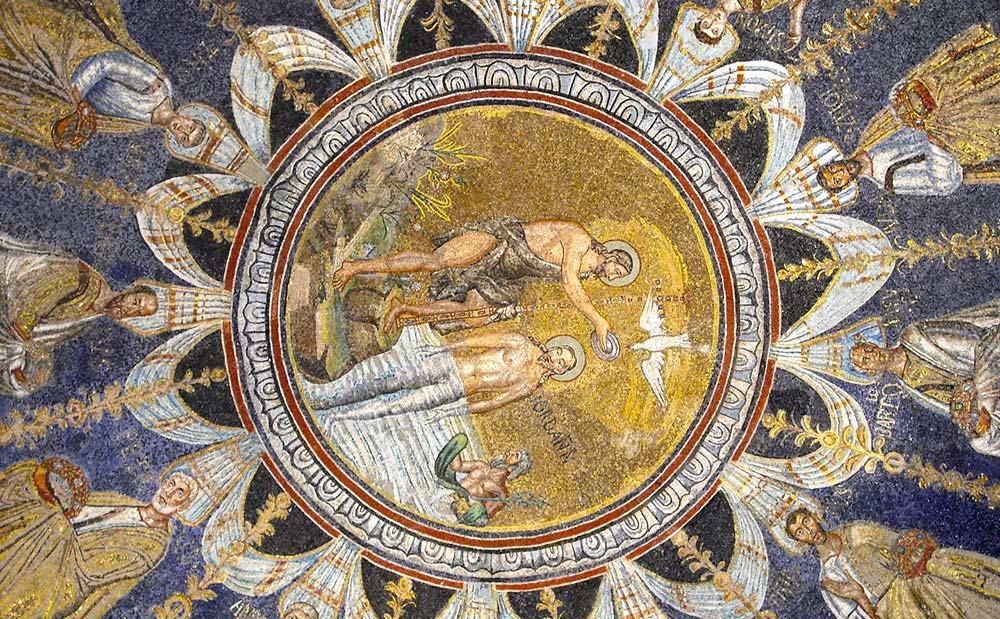 The tomb of Galla Placidia in Ravenna

The first was the fascinating Galla Placidia whose history still echoes through the streets of Ravenna. This woman played a very important role in the events of the late empire: daughter, wife and mother of emperors, took political control for years, until her son, the future emperor Valentinian III, became an adult.

She changed the urban layout of the city by commissioning the imperial palace (probably where the later Teodorico was built), the church of San Giovanni Evangelista and its mausoleum, attached to the now disappeared church of Santa Croce, decorated in the classic Roman style.

Getting to the Mausoleum of Galla Placidia is a walk from the historic center of Ravenna. The simplicity of the external structure does not even let us imagine the beauty of the mosaics that are kept inside.

The mosaics of the Mausoleum of Galla Placidia are among the oldest in Ravenna and inside you can breathe a truly mystical air. The mosaics represent the victory of life over death, much in theme with the funeral purpose of the building. 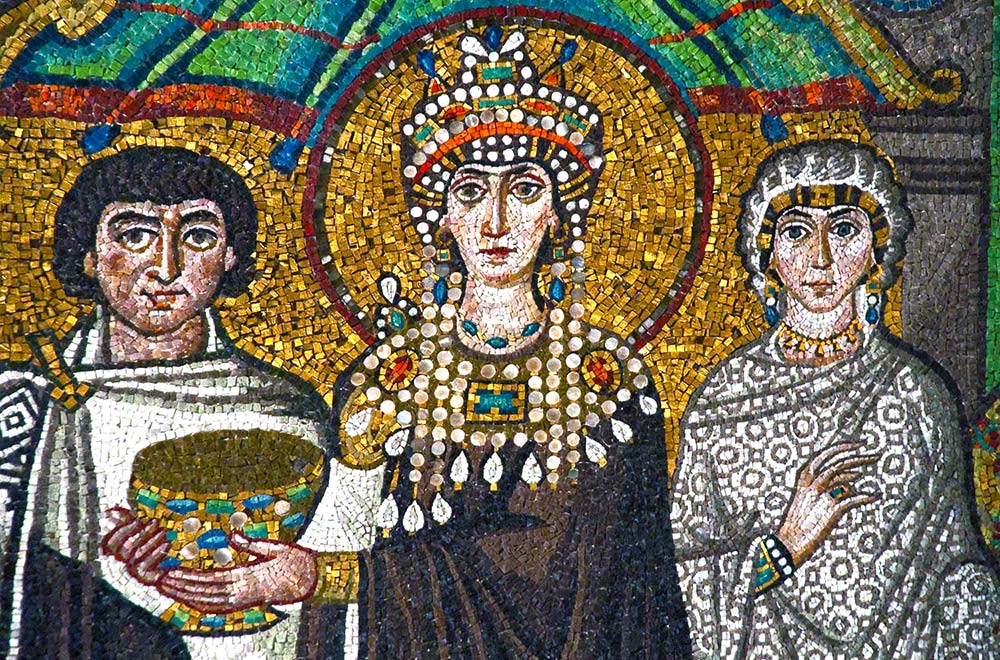 The mausoleum of Theodoric in Ravenna

Another important memorial is the Teodorico mausoleum. The property is located a little outside the city, just outside the walls in the Rocca Brancaleone area, but it is definitely worth a visit.

It was built with white stone and presents the typical decorative motifs of Gota influence: the stones are carved with geometric signs, such as those used on jewels and the roof of the building is made up of a single monolithic stone, called ingens saxum.

In Ravenna there is also the tomb of the divine poet Dante Alighieri who lived here his last years and died in 1321. His mortal remains are kept in a neoclassical temple near the Basilica of San Francesco. 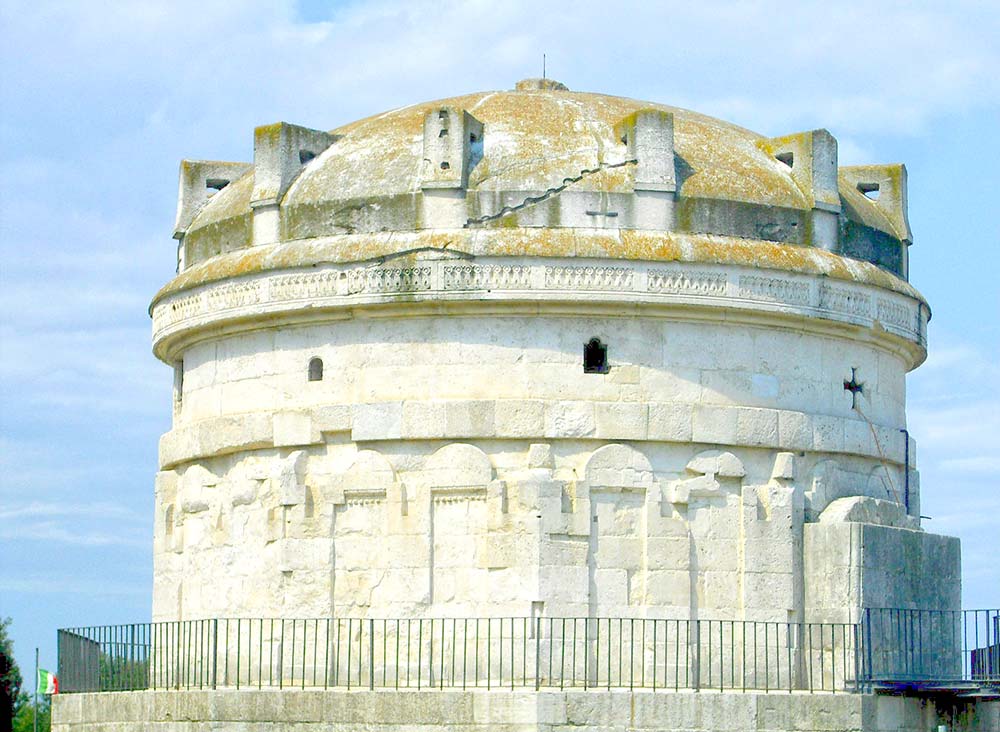 What to see in Ravenna: Sant’Apollinare

Theodoric commissioned the church of Sant’Apollinare, annexed to its palace and decorated with incredible mosaics, which are influenced by a strong Byzantine influence.

The mosaic of Sant’Apollinare is divided into three levels: in the upper part, above the windows, there are stories of the life of Jesus, between the windows there are prophets and saints and below you can see on the left the representation of the port of Classe and right the palace of Theodoric.

Perspective, colors and lines appear naive, but the effect is very suggestive.

The mosaics of the basilica were modified by Archbishop Agnello, under Justinian, who converted the church to Catholic worship (Theodoric was a follower of Arianism), and erased the figures between the columns of the palace representation, replacing them with some curtains (part of the hands and feet of the figures is still visible) and added two processions of Saints martyrs and Holy Virgin. 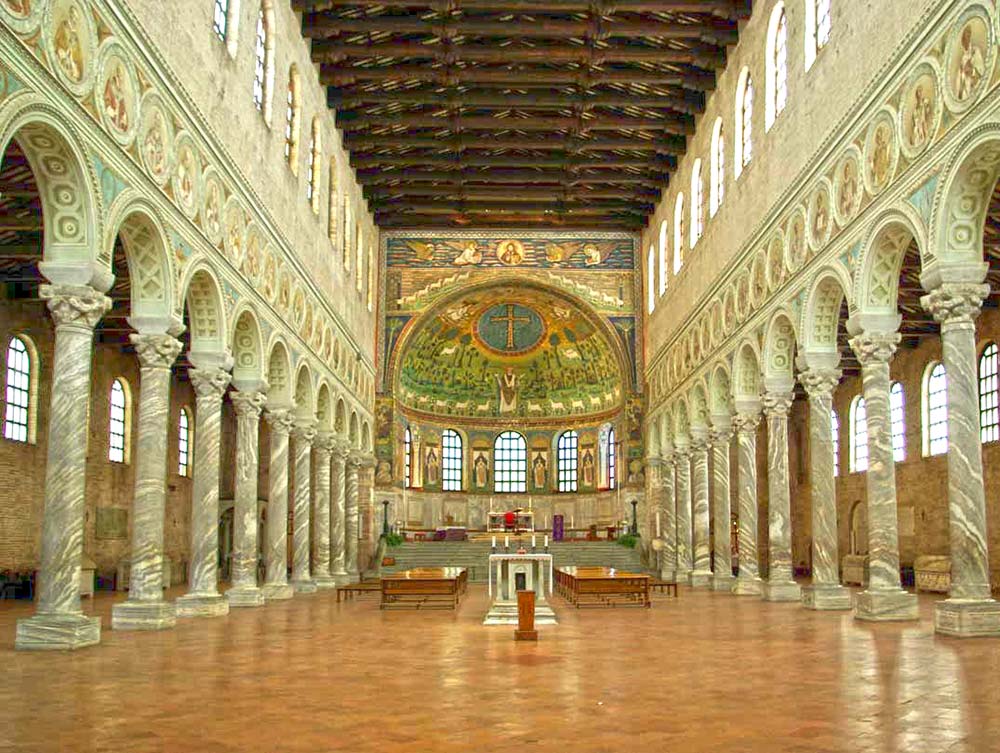 What to see in Ravenna: the church of San Vitale

Built between 522 and 547, it has undergone the influences of both Roman and Byzantine architecture, thanks to the influence of Justinian who commissioned it.

The shape is octagonal and the plant shows countless chapels that open like petals of a flower. The mosaics are so beautiful and rich with their vivid colors and golden backgrounds that will leave you dazzled. The protagonists of this masterpiece are Justinian, his wife Theodora and the court, all hieratic and detached. The presbytery is decorated with stories from the Old and New Testaments, evangelists and saints.

The inclination to abstraction is even more evident in the church of Sant’Apollinare in Classe, outside the city and near the sea. The entrance fee is payable but it is really worthwhile: the mosaic is very special and shows the transition from Roman to Byzantine art.

It is possible to make a combined ticket for 9.50 euros to visit the Archiepiscopal Museum, Neonian Baptistery, Basilica of Sant’Apollinare Nuovo, Basilica of San Vitale and Mausoleum of Galla Placidia. This solution is cheaper than visiting the individual attractions (reduced ticket at the price of 8.50 euros).

How to reach Ravenna

The best connections to reach Ravenna are road and motorway. From the north, Ravenna can be reached via the A14 motorway from Bologna where the A1 del Sole motorway, the A21 Torino-Piacenza and the A22 del Brennero meet.

The airports of Bologna (G. Marconi), Forlì (G. Ridolfi), Rimini (Miramare) and Venice (Marco Polo), are connected with the most important Italian and European cities with scheduled services and charter flights. From Bologna you can reach Ravenna by car and by train with journey times between one and two hours; by car from Venice about two hours, from Forlì and Rimini in less than an hour.