Home » Travel destinations » Europe » Altare della Patria: everything you should know about the Vittoriano in Rome

Altare della Patria: everything you should know about the Vittoriano in Rome 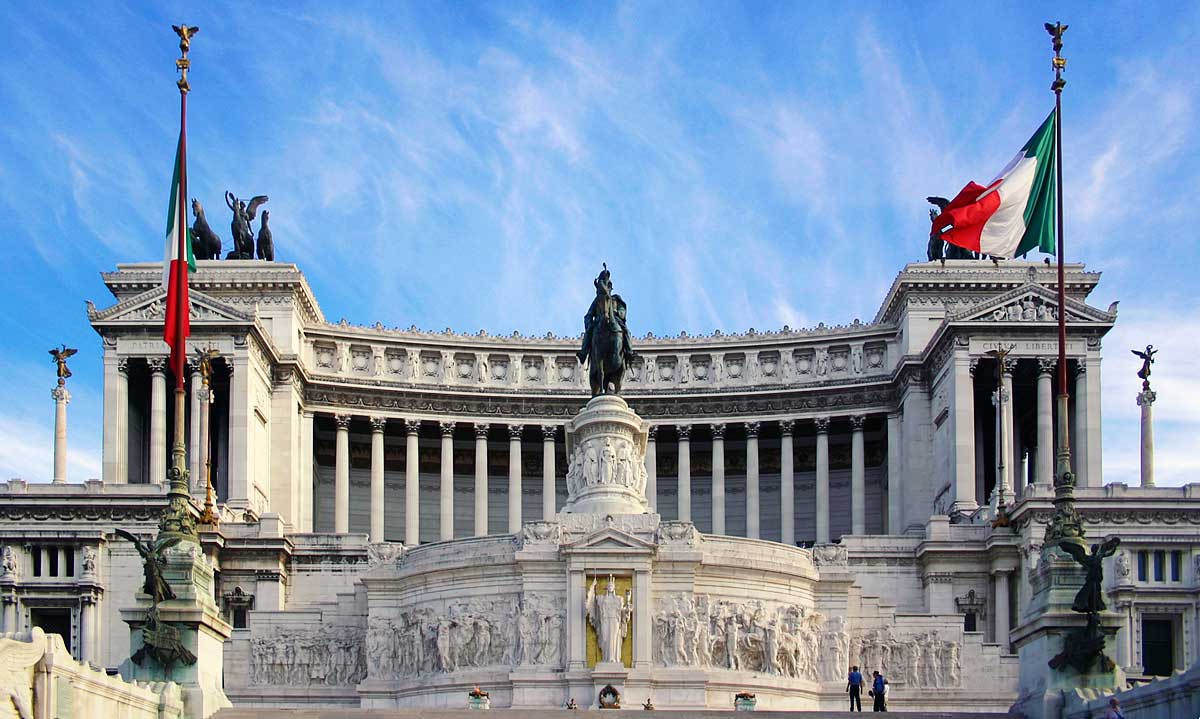 Skip the line ticket for colosseum in Rome

Many Romans call the Victorian “typewriter”, repeat that it is ugly and associate it with fascism. In reality, it has nothing to do with Mussolini or the twenty years of his dictatorship.

Do you want to know more about this monument of the capital?

Vittoriano is a symbol of italian national unity

The Vittoriano or Altare della Patria is a monument of great symbolic value that brings together all the values of Italian Risorgimento and of Italian Constitution.

This is one of the most important monuments in the history of Italy. It contains a large number of symbols and references both to national unity and to Christianity. 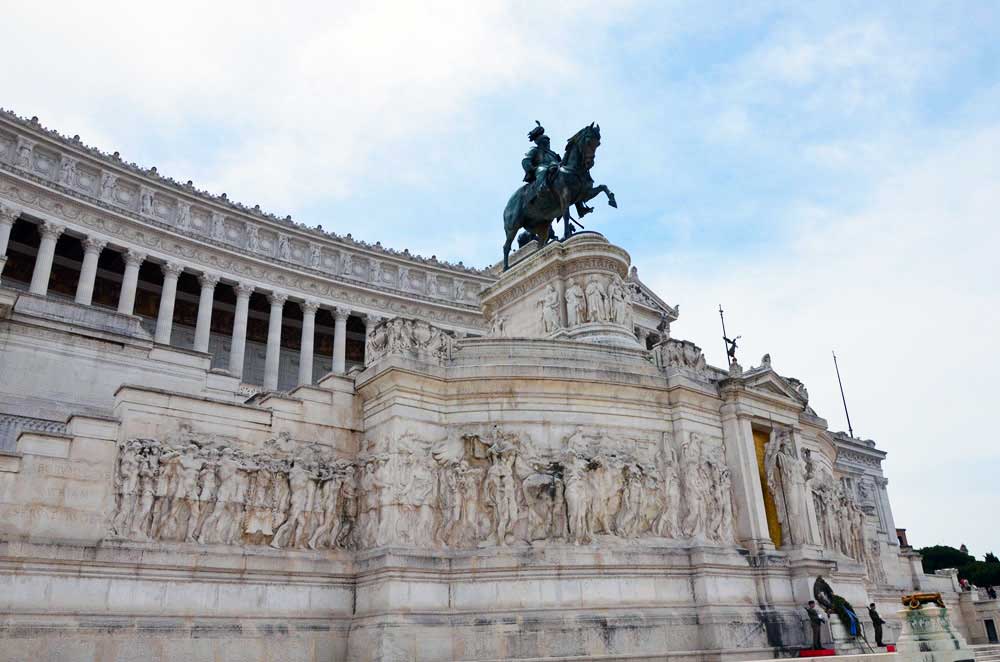 The history of the Vittoriano

The construction of the Vittoriano was started by Umberto I of Savoy in 1885, son of Vittorio Emanuele II, the first king of Italy. The need was to have an extremely symbolic memorial monument to witness the changes in the country.

The decision to build the Vittoriano on the Capitol was certainly not casual. This mountain is one of the most important in Rome because it is here that, according to legend, Rome was founded and is here that the temple Capitoline Jupiter was erected.

Even the choice of the Victorian position is not accidental. Symbolically it was decided to place the Vittoriano not far from the Colosseum, the ultimate symbol of Imperial Rome and in opposition to St. Peter, which represented the temporal power of the Popes.

To counterbalance the power of the popes, it was built a few years later the Palazzo di Giustizia near Castel Sant’Angelo. This building was a prison under Vatican control and therefore a symbol of a religious power that now had to give way to a united Italy. 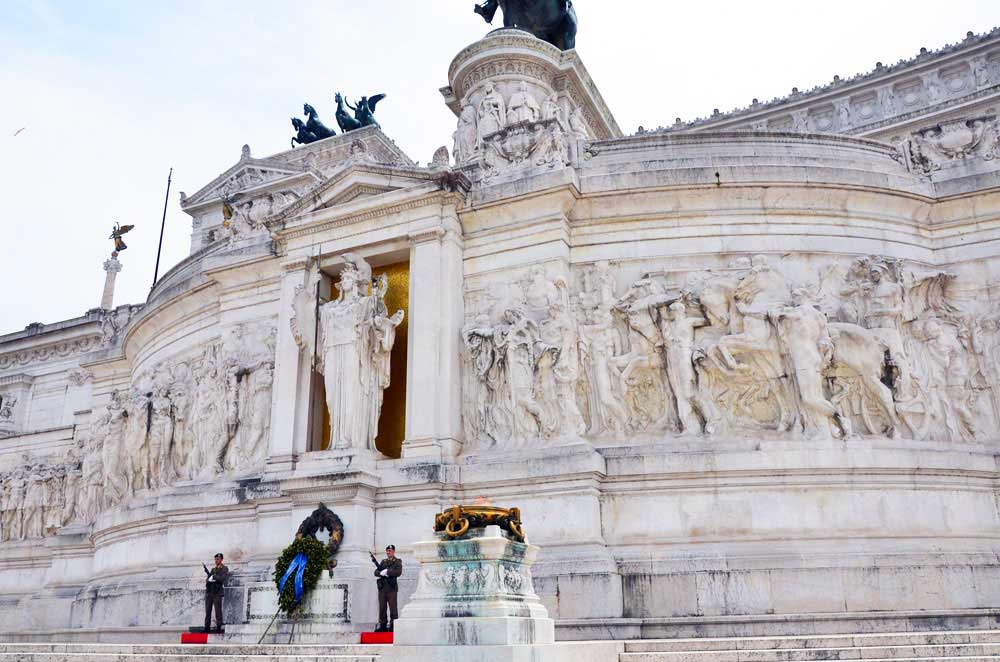 For the Vittoriano project, a public competition was announced. It was won by Giovanni Sacconi, a young architect from Le Marche who had an ambitious project with a strong symbolic value.

Many buildings were destroed to allow the construction of the Vittoriano in Rome. To make way for the monument, the convent of Santa Maria in Ara Coeli was demolished, as well as numerous other buildings on the side of the Campidoglio.

The Victorian’s work lasted almost 25 years. At the inauguration of the Altare della Patria, dating back to 1911, were present all the greatest personalities of the State. 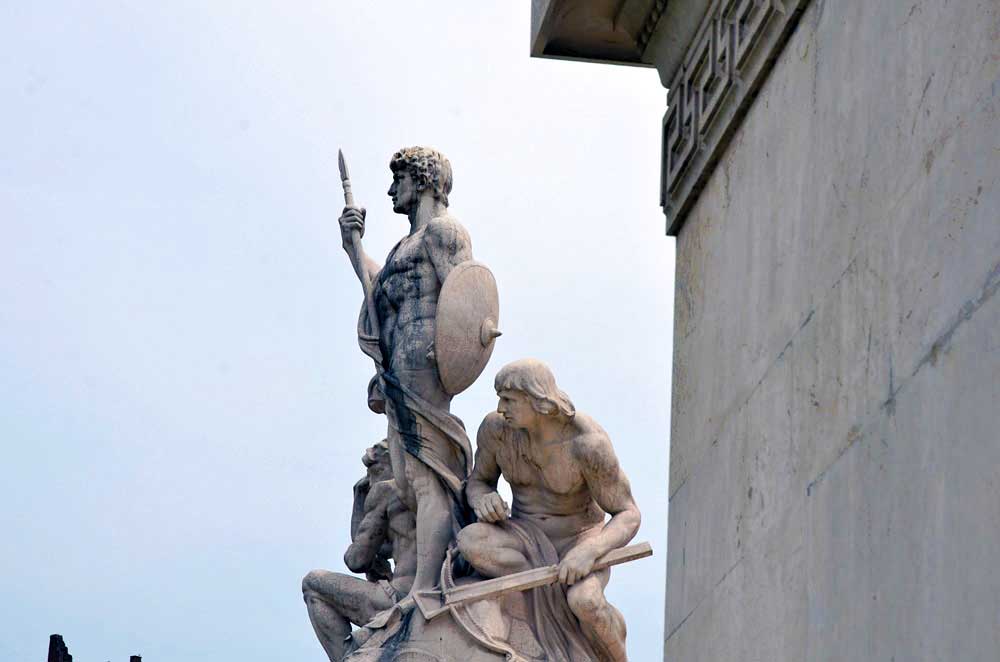 The allegorical meanings of the Altar of the Fatherland

This building represents Italy: on either side, where the sun rises and sets, there are two fountains with the Adriatic and Tyrrhenian seas, as on the sides of the Peninsula.

In the center of the Vittoriano, there is King Vittorio Emanuele II. The statue rests on a marble basement at the foot of which the Italian cities have represented, the municipalities on which the country is founded and their history. Among the most important symbols of the Vittoriano, you can see Florence, with the head crowned with laurel, Ravenna, dressed in Byzantine robes and Bologna that is represented with the academic toga and the book.

At the top, on the two propylaea, the words “PATRIAE UNITATI” and “CIVIUM LIBERTATI” stand out as “The unity of the fatherland” and “Freedom of the citizens”, which represent the two fundamental principles of unity and freedom the new state was promoted.

The huge building, which with the quadrigae reaches 81 meters in height, is all decorated by sculptural groups performed by various artists representing the values of the Italian people: we find the Force, the Right, the Action, the Concordia, the Sacrifice and the Thought.

In the middle, next to the tomb of the Unknown Soldier, placed in 1921 in memory and warning after the First World War, stands the statue of Rome. On the background, there is a golden mosaic to symbolize the importance of the new capital and its geographical and political centrality. On both sides, we can find the representation of agriculture and industry. they represent the work on which the economy of the country rests and the patriot love on which society is based.

It should not destabilize the large Victorian portico, which consists of only 16 columns. These are in fact a representation of the 16 regions of which Italy was formed at the time. Each column is the result of the work of artists from the region he represented. In the account are missing Valle d’Aosta, Friuli Venezia Giulia, Molise and Trentino Alto Adige.

Two tall columns, surmounted by winged victories, crown this exaltation of Italy and its values, its people and its history. 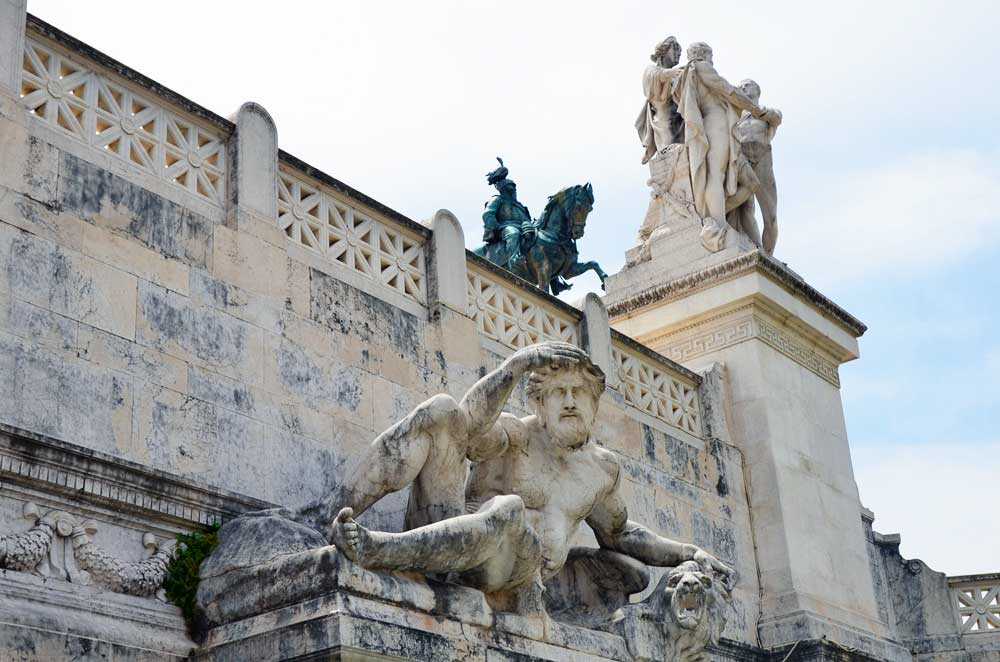 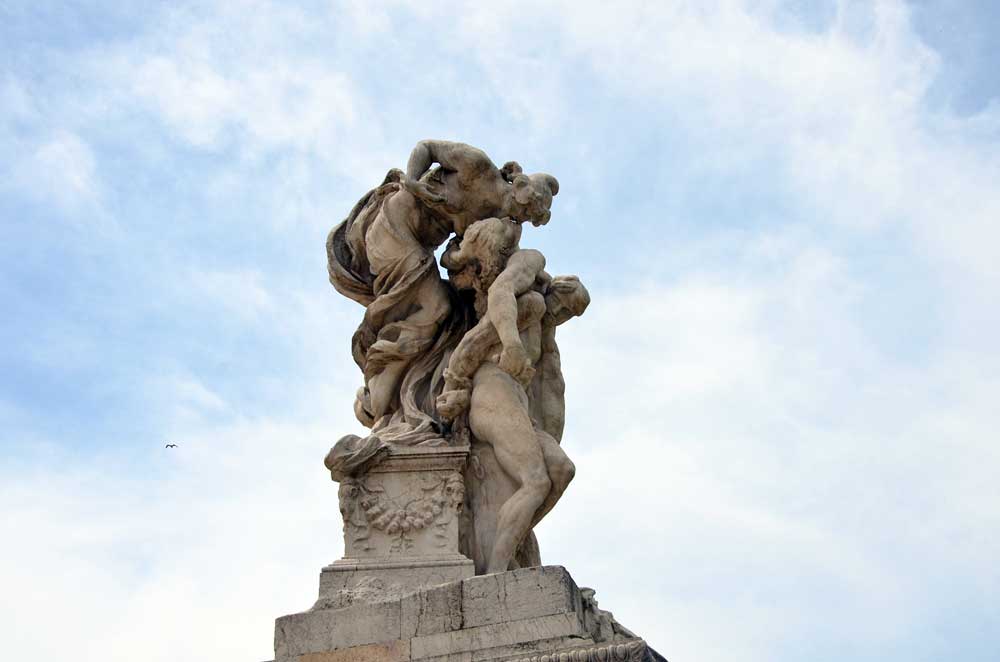 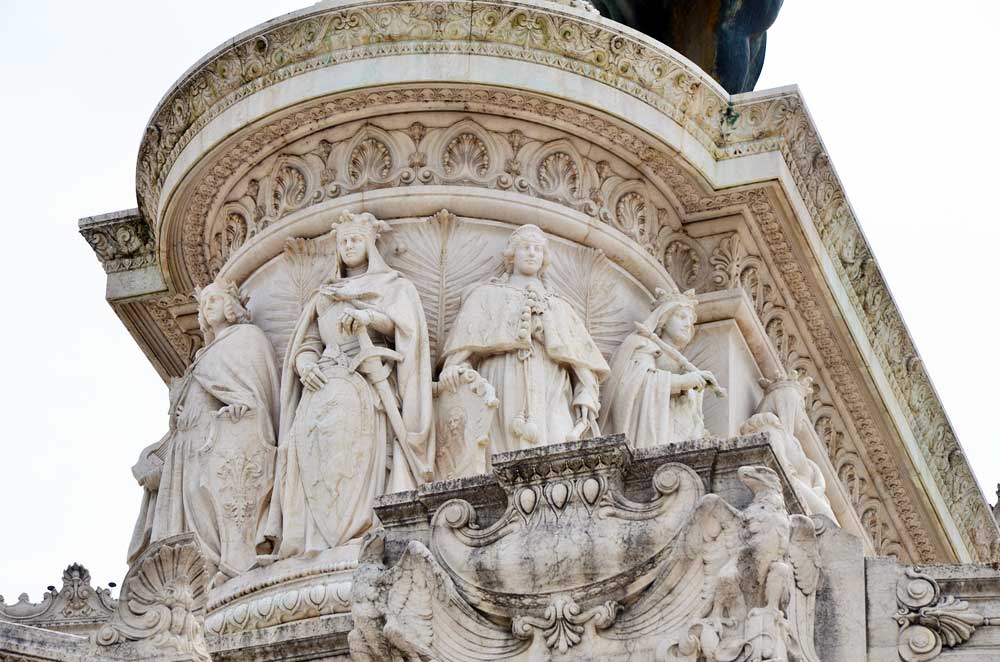 The terraces of the Vittoriano

The interior of the colonnade, that forms the terrace, is decorated with marble and mosaics by Giulio Bargellini. They represent the Faith, the Work, the Strength and the Wisdom, on the one hand. The Law, the Value, the Peace and the Union of the other.

Even the plant motifs that decorate the Vittoriano have a precise meaning. The laurel represents the value, the palm the victory, the oak the strength, the myrtle the sacrifice and the olive the peace.

The ticket price for the Vittoriano terrace is 7 €, reduced 3.5 €

The equestrian statue of the Victorian

Regarding the huge bronze equestrian statue, made in 1910 by Enrico Chiaradia, there is a curiosity that seems incredible. A dinner for twenty people was organized inside the horse’s belly in order to celebrate the success of the work, as evidenced by vintage photos.

This composition is in fact 10 meters long and 12 high, more than enough space to set up a table. 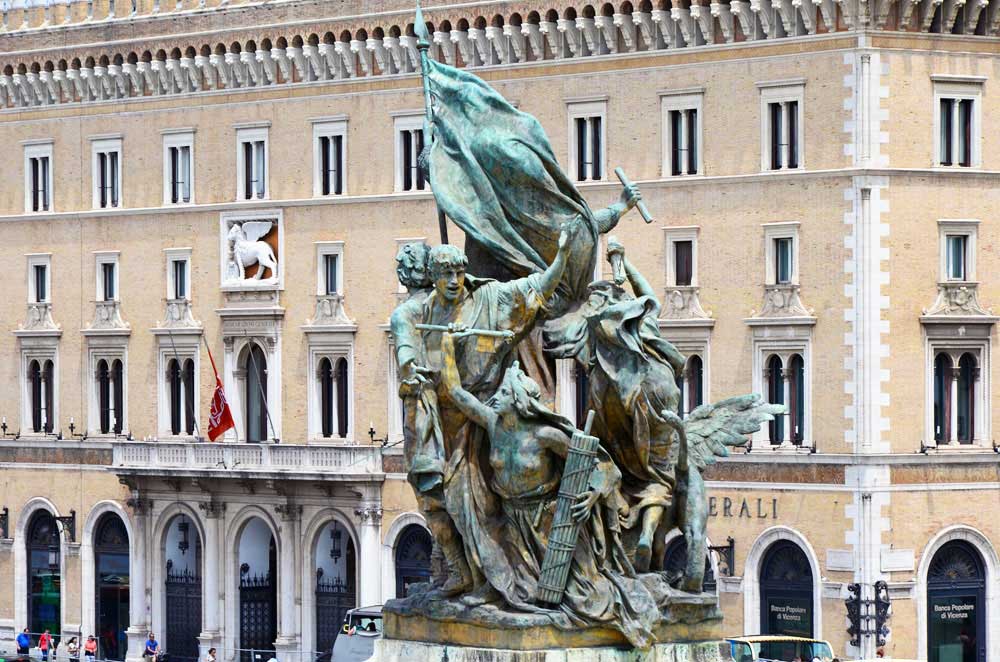 The museums inside the Altare della Patria

Inside the Vittoriano there is the flags sanctuary, the splendid museum of the Risorgimento (with many explanations on the altar of the Patria itself) and the Italian emigration museum, opened in 2009.

Furthermore, there is one of the most important spaces for temporary exhibitions in Rome, the Vittoriano Complex in fact. 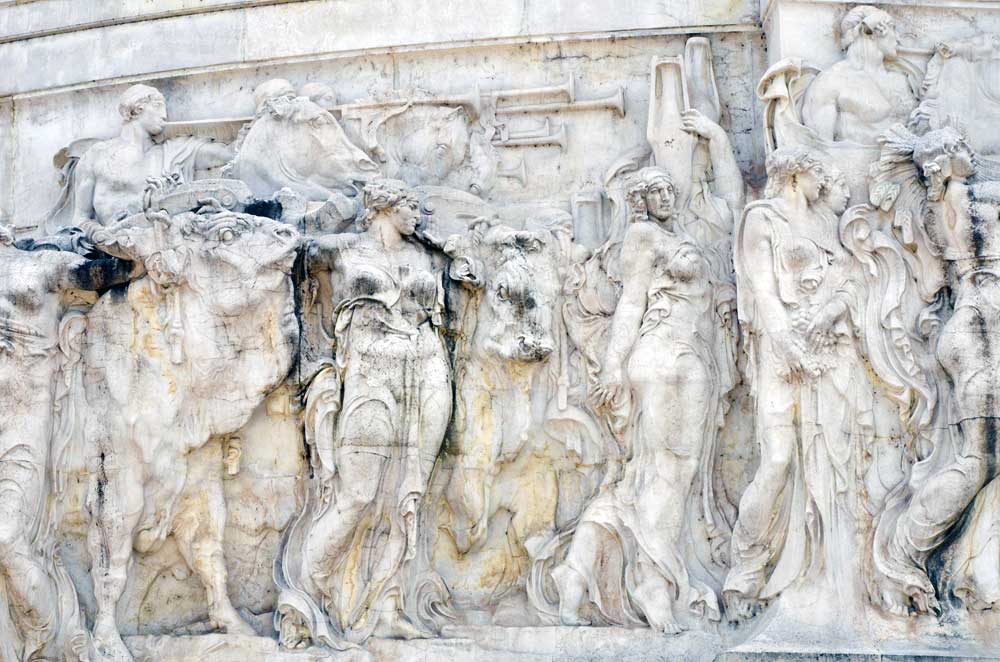 A mandatory stop in Rome

A visit to the Vittoriano is, therefore, a must for every Italian and every tourist who comes to discover Rome, its history and its traditions.

Have you ever been there? Write me your impressions about Victorian in the comments. 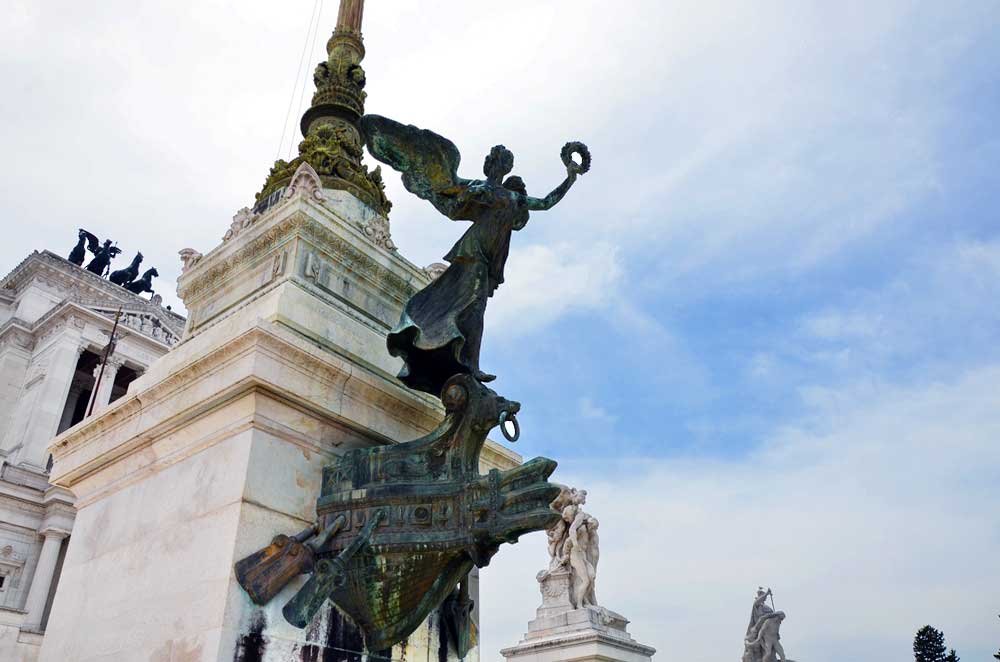 Skip the line ticket for colosseum in Rome