Home » Travel destinations » Europe » Visit Lisbon: 8 things to do absolutely in the capital of Portugal

Visit Lisbon: 8 things to do absolutely in the capital of Portugal 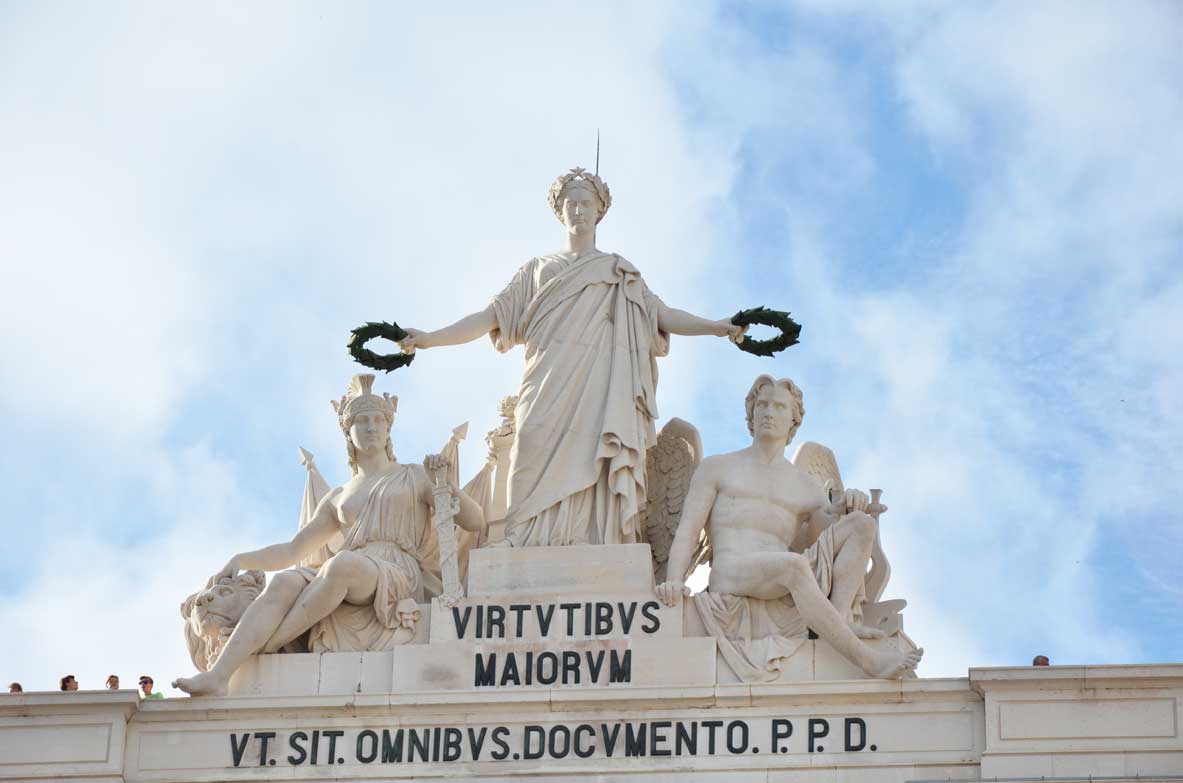 Discover the Lisbon card with discounts and free admissions for 1, 2 or 3 days

If you want to visit Lisbon, you can’t absolutely miss these attractions! Here are 8 things to do in the Portuguese capital that I tried personally

I will tell you what to see, to do and to taste in the wonderful capital of Portugal and some tip that was useful to me.

The history you have to know to understand and visit Lisbon

If you want to visit Lisbon, you need to know some historical outlines to understand it. In ancient times it was known as Olisipo, and it was already a marketplace. When the Roman occupied the Iberian Peninsula, they called this area Lusitania and the city became part of the Roman Empire in 205 b.C. In 585 a.C., during the Barbarian Invasions, under the Visigoths’ control, they called the city Ulishbona.

In 711, when Arabs conquered it, the toponym became al-Isbunah. Islam became the official religion but Christians and Jews, who had been living in the city for lots of centuries, could keep following their faiths. Evident signs still endure in the city, including in the ancient district of the Alfama, on the hill of the castle.

In 1147 Christians conquered the city again with the first Portuguese king, Afonso I. The mosques were transformed in churches and Christianity became the official religion again.  Not only that, since then, Lisbon and Portugal became staunch protectors of the Catholic church. The period between XV and XVII century was a golden age for the city thanks to America discovery and to the movement of courses in the Atlantic Ocean. Lisbon was the harbour from which goods from the Indies, Africa, the new continent came from and where there were all the riches.

In 1755 this period of prosperity ended with the terrible earthquake that razed to the ground almost all the city and some important monuments like the Carmo Convent. The Napoleonic conquest forced the sovereigns of Portugal to exile to Brasil and lose their riches. in 1908 they killed the king and proclaimed the republic. A period of great political instability, which culminated in the dictatorship of Salazar, which lasted from 1932 to 1974.

Today Lisbon is very active from the point of view of culture and art. In recent years different museums have been inaugurated while very modern and cutting edge buildings occupy the area of Parque das nações. If you want to know the attractions not to be missed to visit Lisbon, you just have to keep reading! 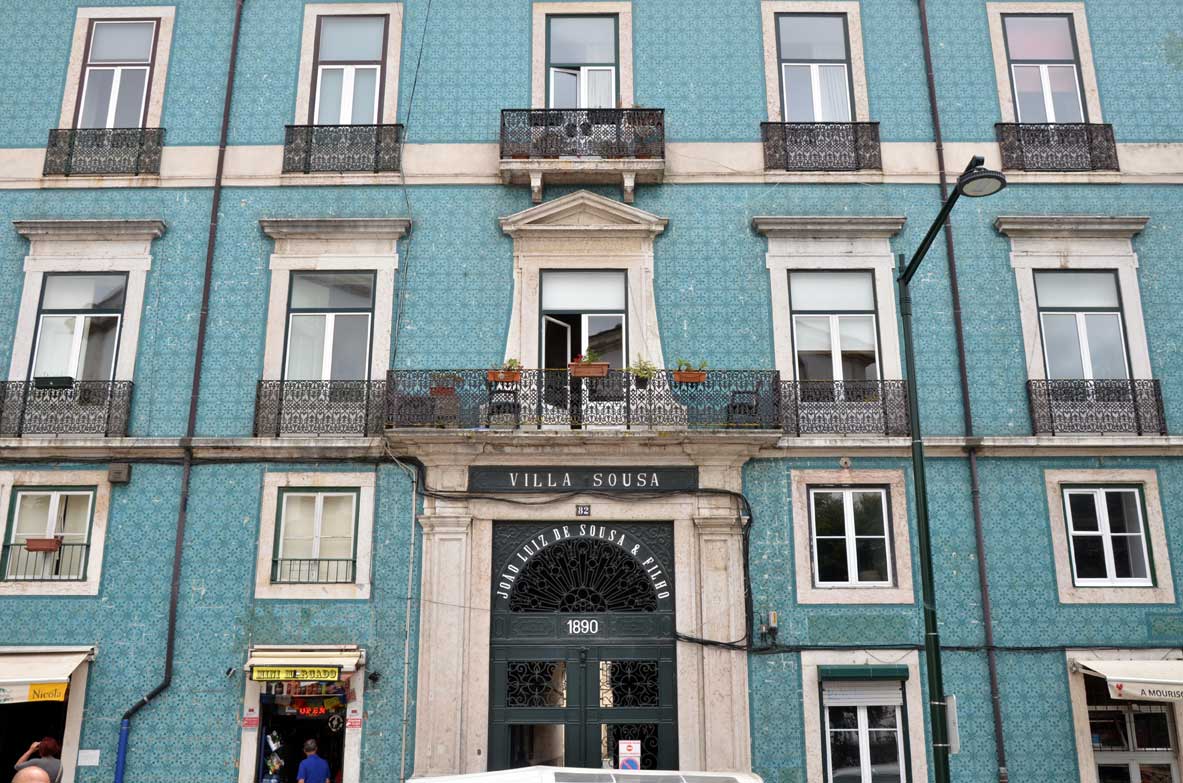 The castle of Lisbon is one of the most evocative places of the city. It was dedicated to Saint George by King Juan I, who had married an English princess very devoted to the Saint.

This medieval castle was modified on several occasions during the centuries, and it was the core of Lisbon military life because it was the last bastion of the city during sieges. It was completely abandoned after 1755 because of the great earthquake that severely damaged it. In the 1940s it was restored and its foundations were brought to light again. You can enjoy a magnificent landscape of the city from the big square Praça D’Armas.

If you go up the towers of the fortress and walk through the bastions, you can enjoy an incredible view of Lisbon. I suggest you a visit to the museum which has very few rooms but it gives you a precise idea of the city and of this incredible castle. You need at least two hours to visit Saint George Castle because if you want to visit Lisbon you cannot absolutely miss it! 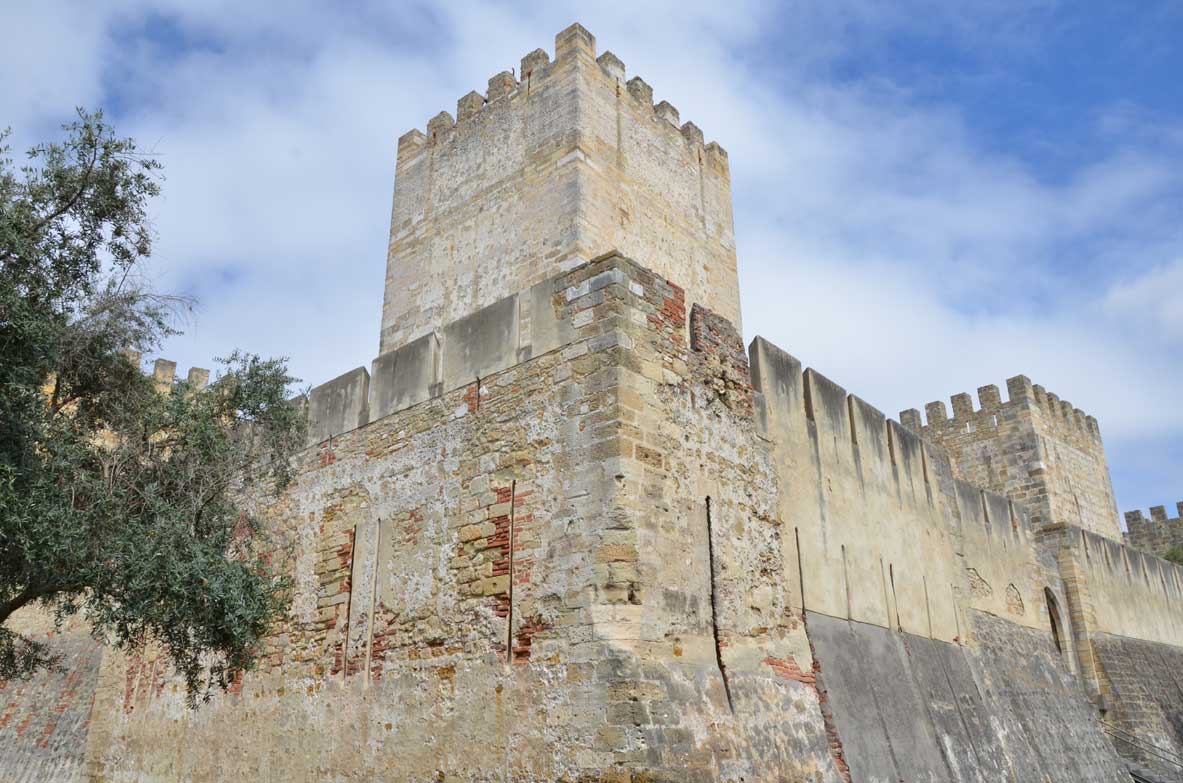 2) The cathedral and the churches of Lisbon, a jump in the votive art

Lisbon is a city with a deep Catholic tradition and for this reason, they built numerous and wonderful churches during the centuries. You have to visit Santa Luzia (with magnificent azulejos that represent the history of the city), the Church of Santa Engrácia (today National Pantheon) absolutely and the Cathedral Sé obviously.

This building was built in 1150 by King Afonso I, who had reconquered the city from Arabs and built it in place of a mosque symbolically. The place had a centuries-old tradition since there was a church of the Visigoths before the mosque, built on a Roman monument. The abbreviation Sé indicates sede episcopalis or episcopal abode because it hosted the new bishop of the city.

In this magnificent church different styles coexist because it is very ancient. The facade, characterized by two big crenelated towers, is Romanesque, the cloister is Gothic and many chapels are Baroque. However, after the earthquake of 1755, the Sé was seriously ruined too and it was rebuilt in Neoclassical and Rococò style later. On the first floor of the cathedral, there is a small museum of the treasure, interesting to recall the executive phases of the church.

You can’t miss a visit to this full-of-history place! 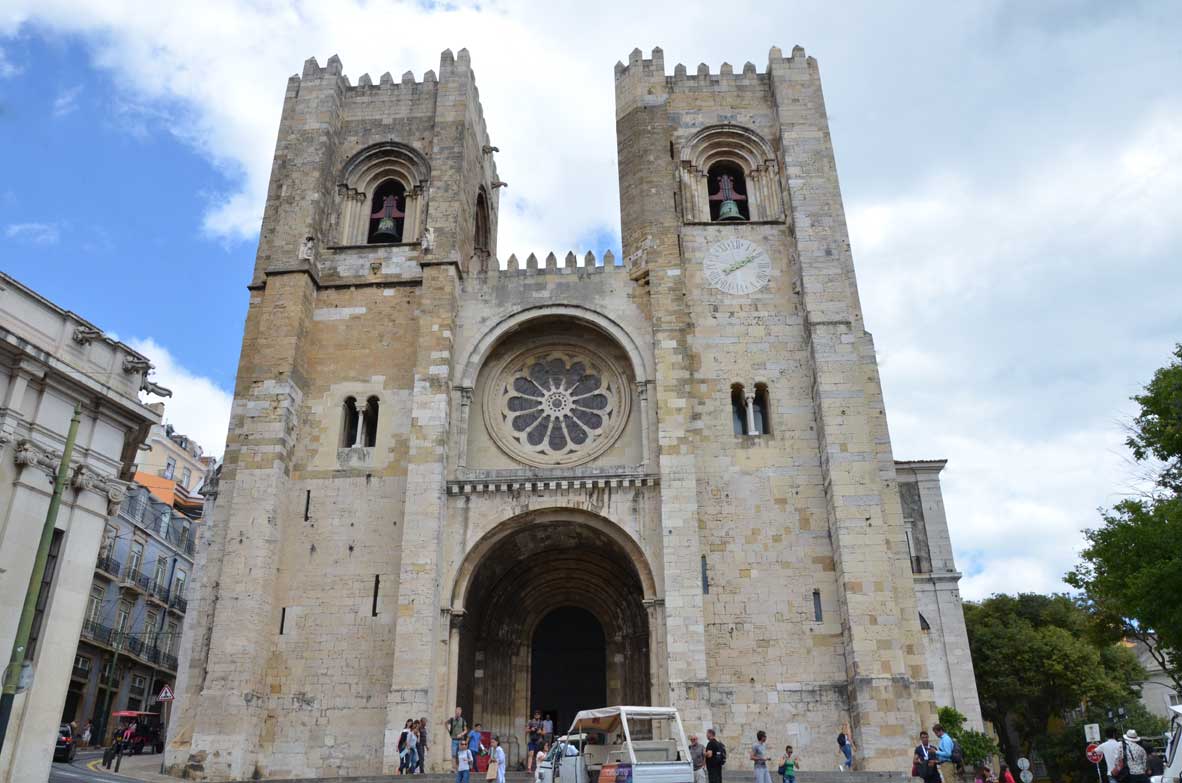 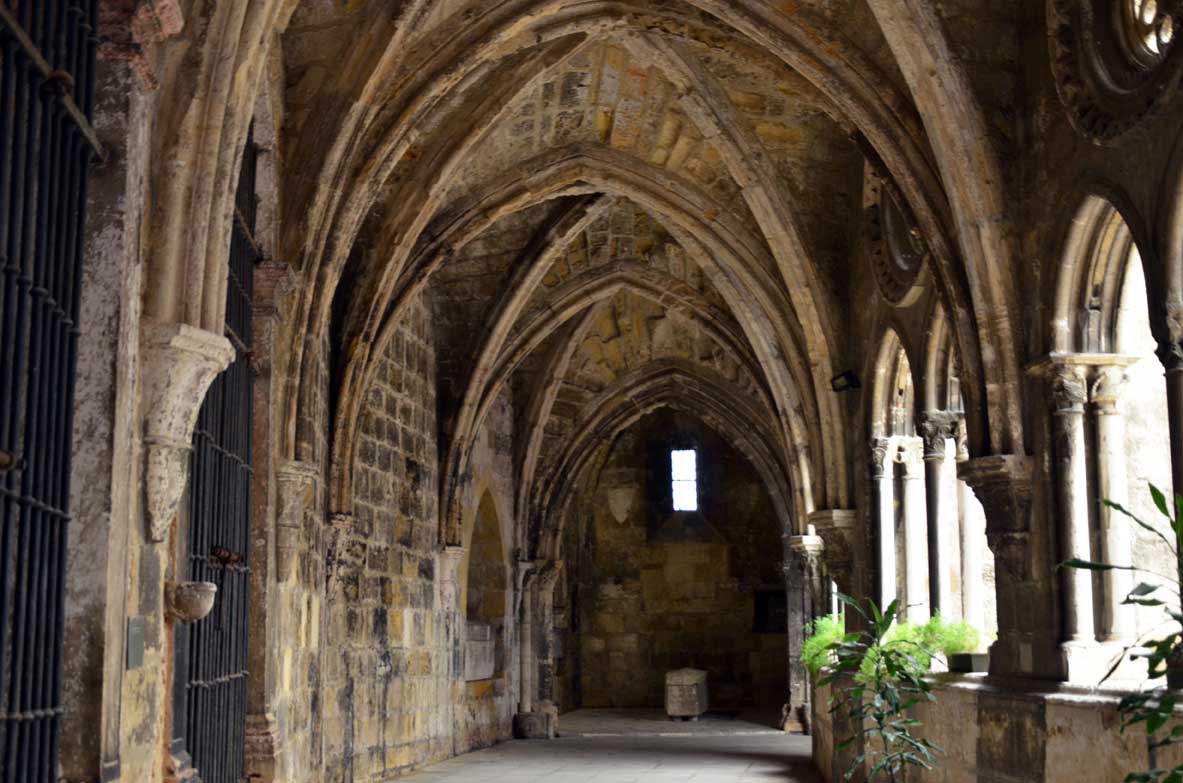 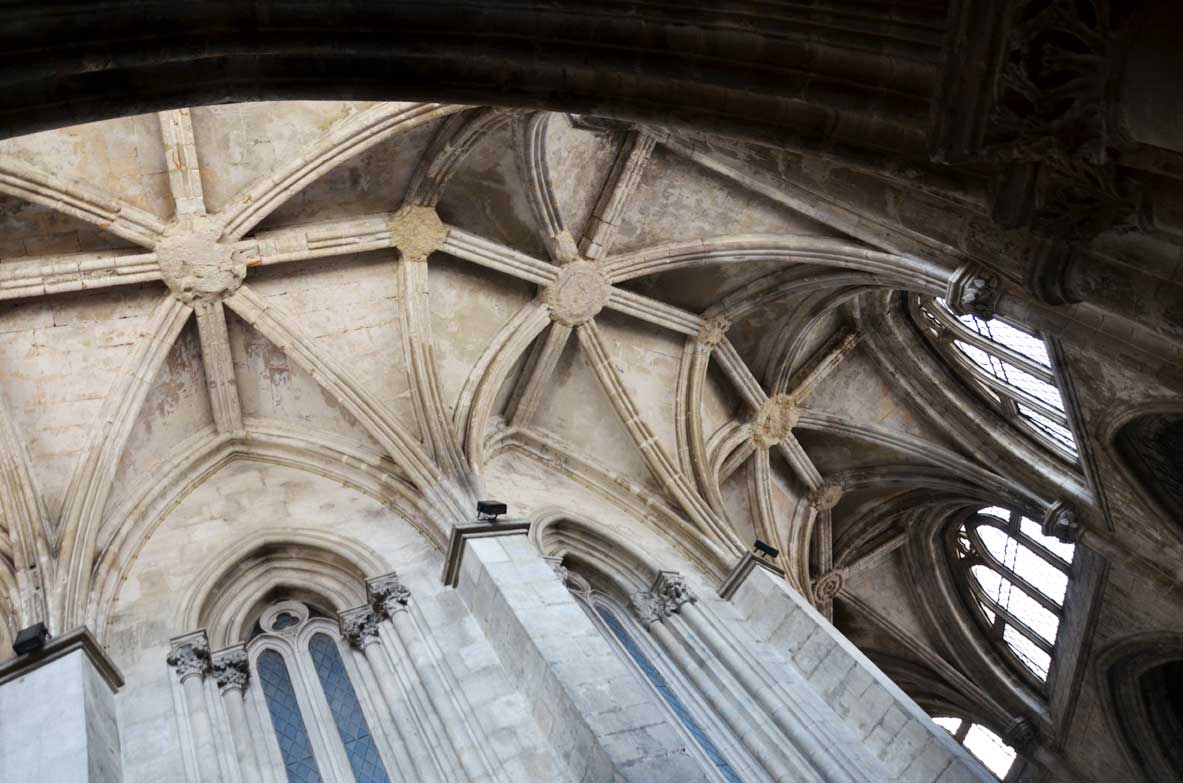 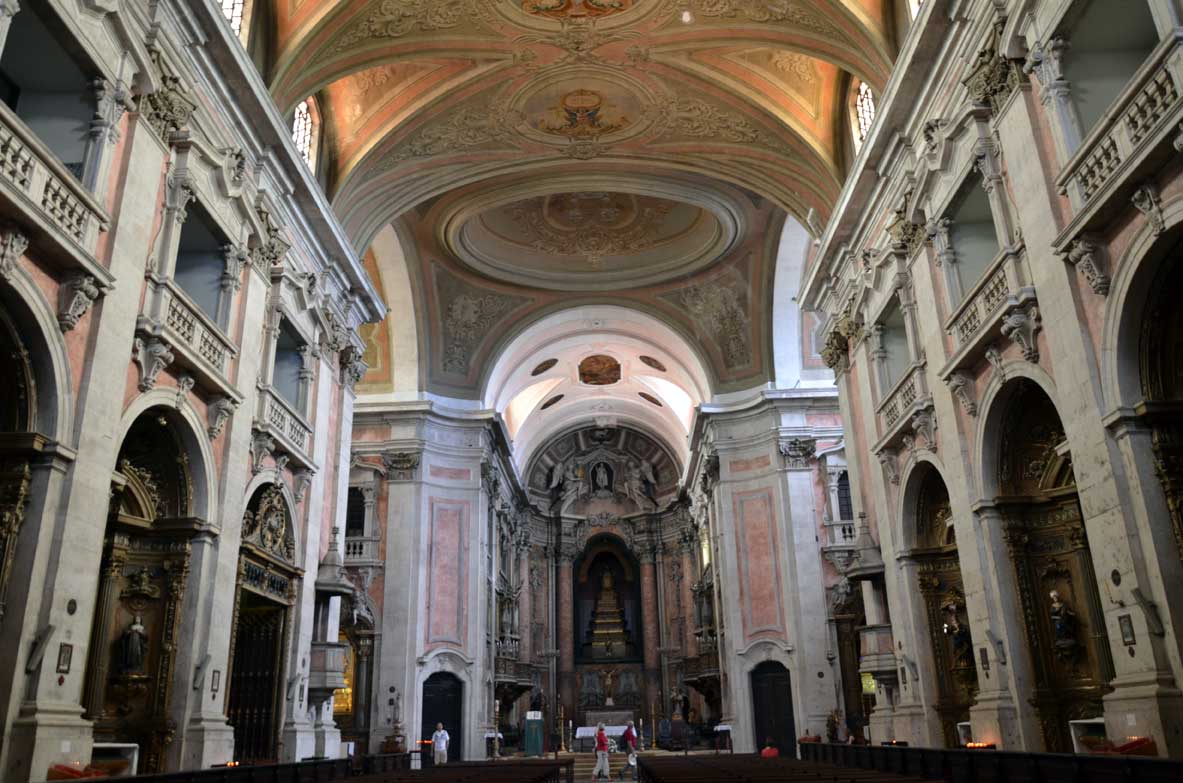 3) The Jéronimos Monastery, the attraction you have to see absolutely if you want to visit Lisbon

This structure is one of the most important and beautiful of Lisbon and among the most beautiful Manueline monuments. If you want to visit Lisbon you can’t absolutely miss it! The Monastery was built to celebrate the return of Vasco da Gama, who had found the route for the Indies. Thanks to a percentage of the importations from the new trade routes they could rebuild this structure.

The decorations are very particular and they come from Gothic and Reinassance traditions. This style is called Manueline, from king Manuel I who was its patron. The beauty of sculptures and the balance of the whole thing are so fascinating to make the atmosphere calm and elegant in spite of the great splendor of the decoration. Works started in 1502 and ended almost one hundred years later. They decided to build it in Bélem, far from the city center, because it seems the great seafarer passed the night before his departure praying right here.

The church seems to be inhabited by trees full of branches because of the high voults so rich of ribbings! The project belongs to the architect Torralva and there are the funeral monuments of the king and his spouse between the rich decorations. Inside the Monastery you can enjoy the tombs of Vasco da Gama and the poets Fernando Pessoa and Luís Camões.

In the church there are wonderful masterpieces of Portuguese gold working. The sacristy, which can be visited paying, separately from the rest of the Monastery (the visit of the church is free), is splendid.

My favorite part is certainly the two-story and superbly decorated cloister. Also the refectory is beautiful, with numerous azulejos. 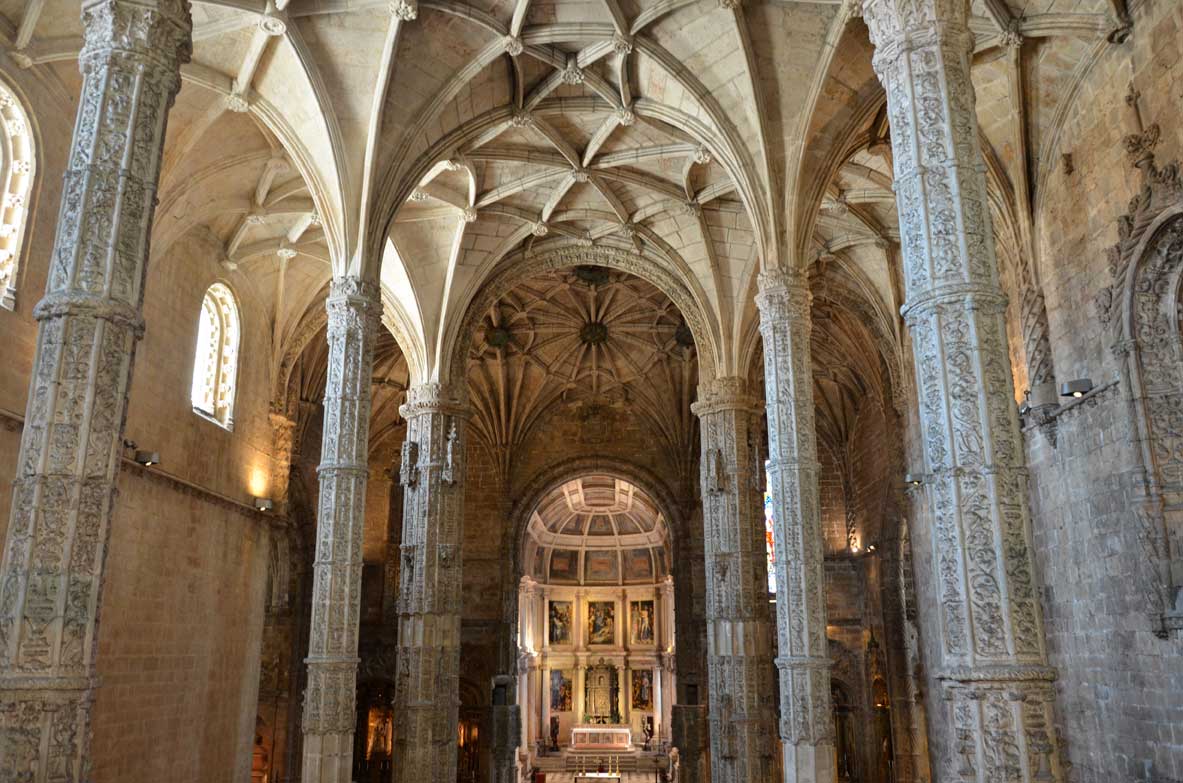 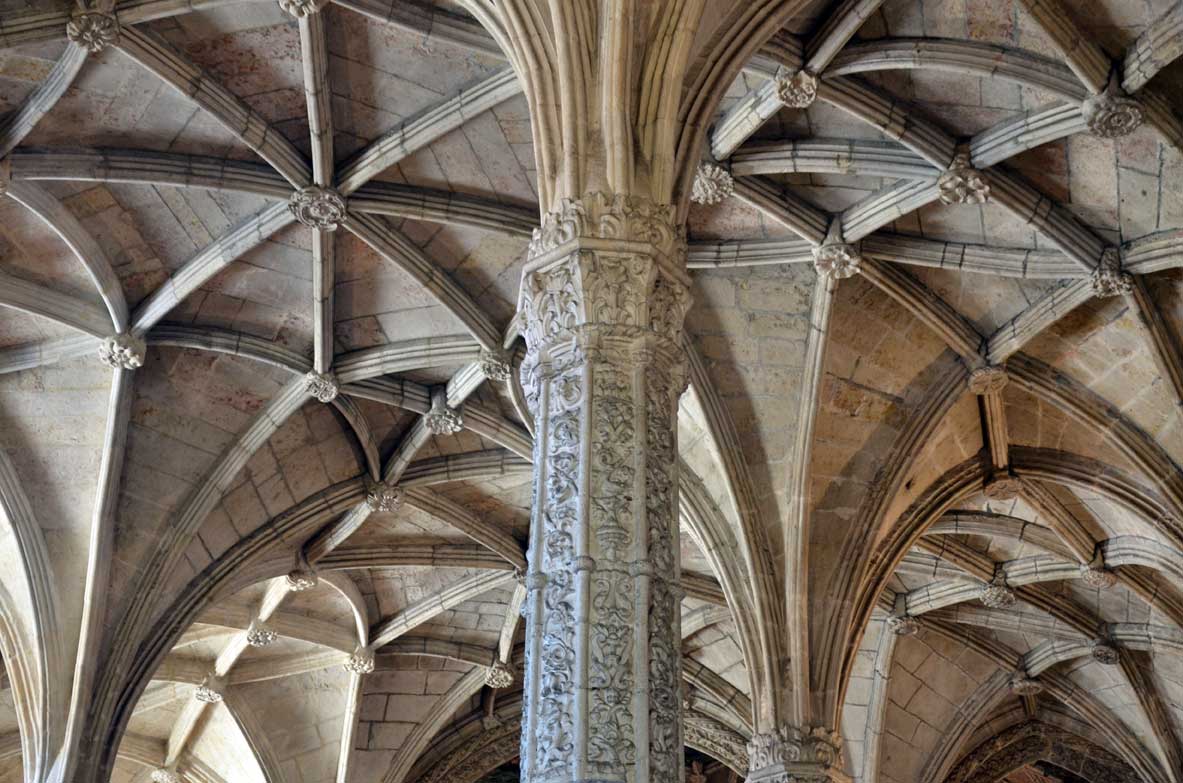 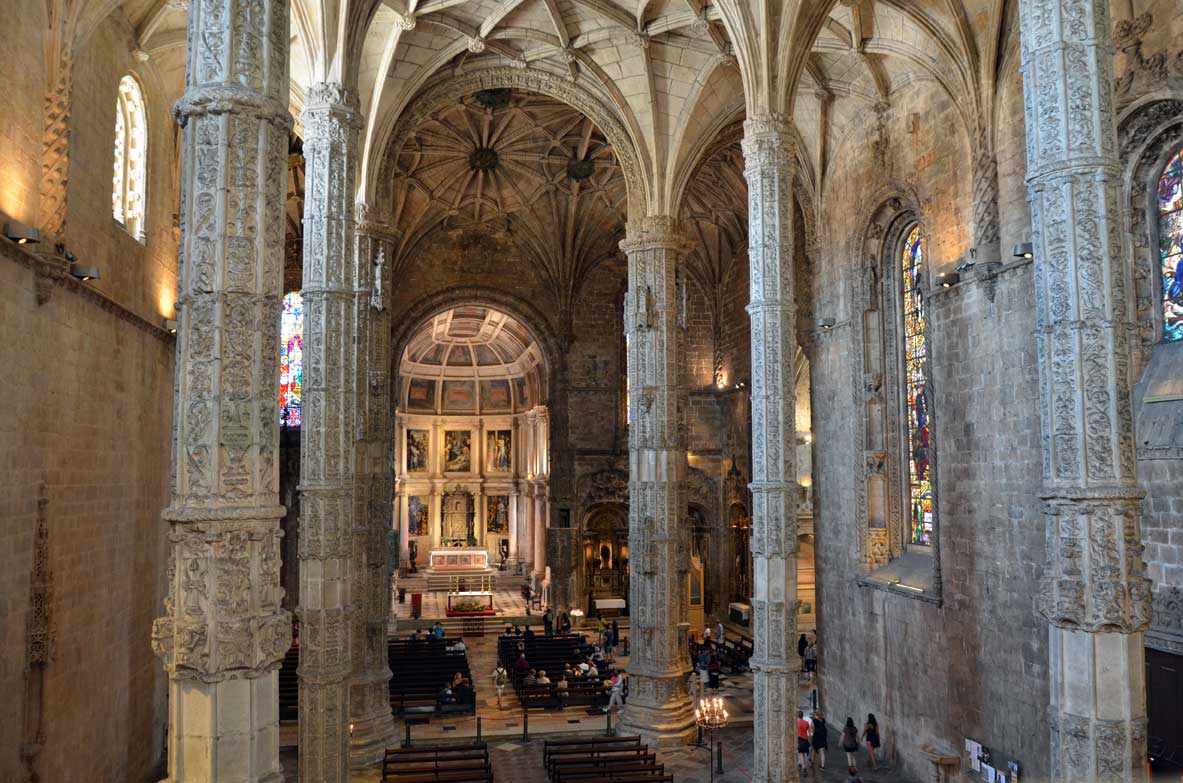 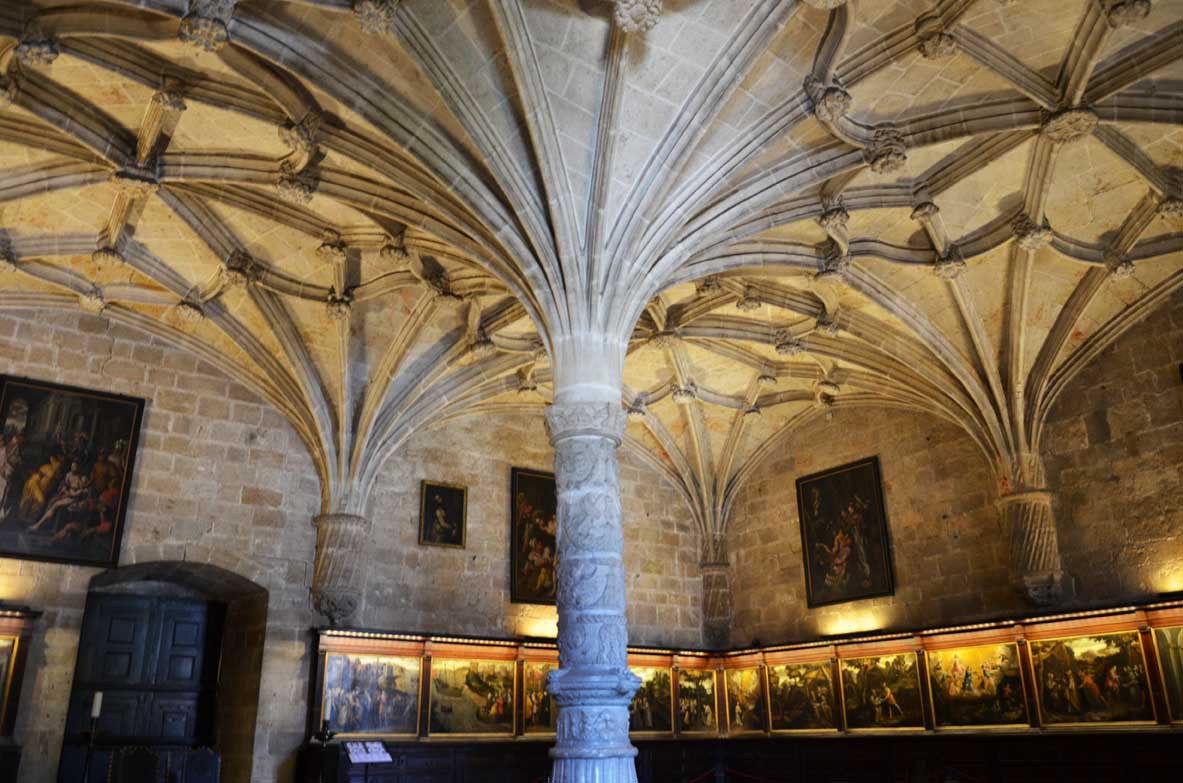 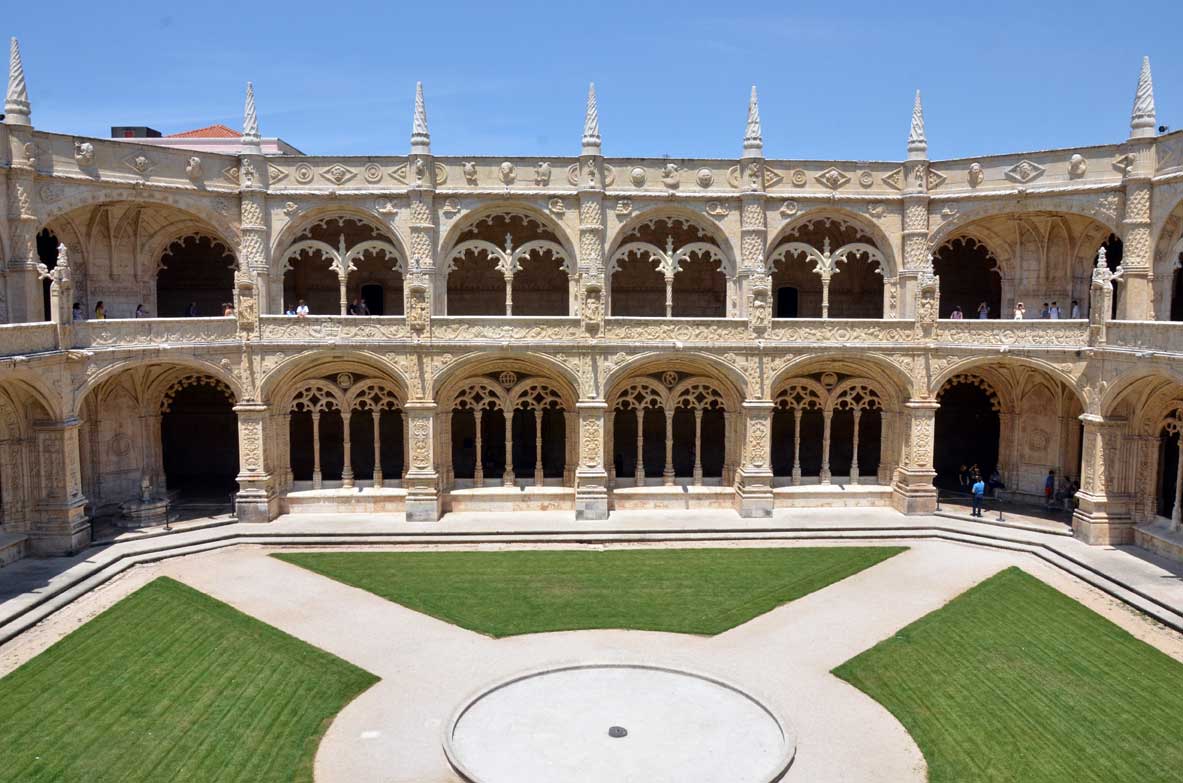 4) Small museums, great history. Here are the museums you can see to visit Lisbon!

I tell you about the museums to see in Lisbon in this post because they are a lot and wonderful! Let me know what you think about them! 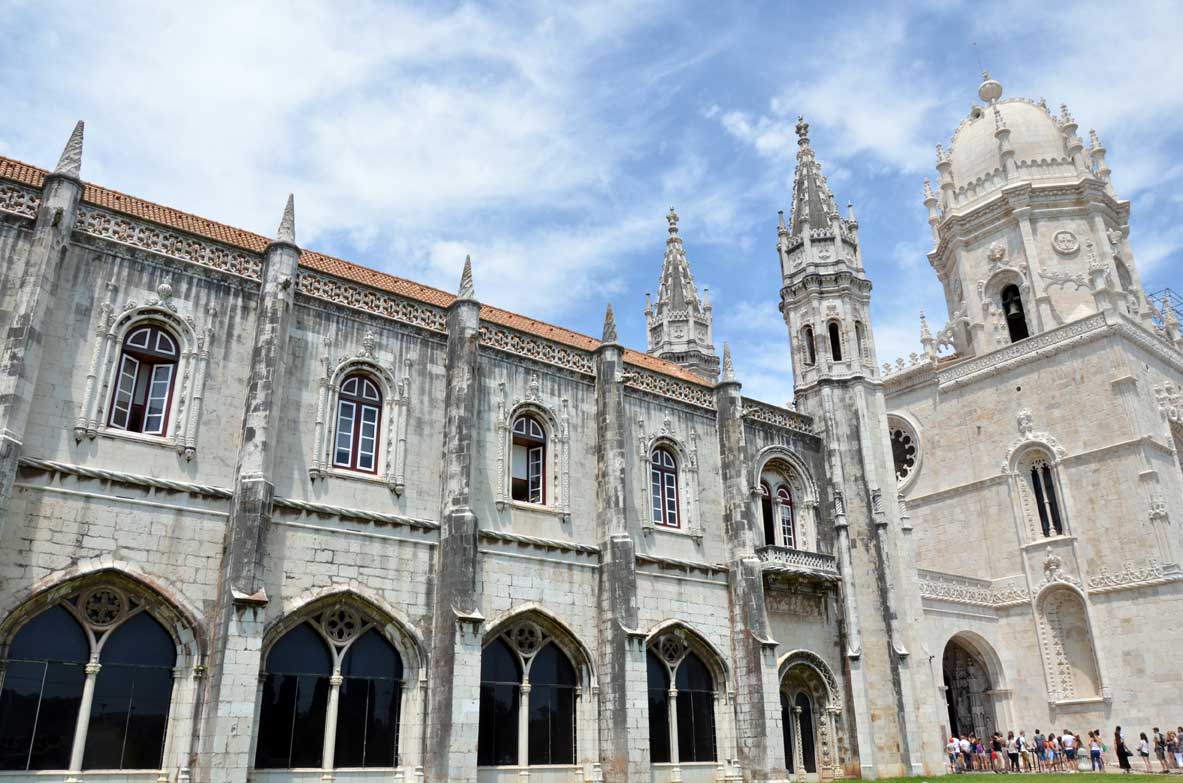 5) Discovering the real soul of Lisbon walking through the city

Lisbon has just a flaw, it is all uphill!

It is hard to travel it by foot but it is also the best way to know and live it. The area of the Alfama is one of the most beautiful districts where to walk, a labyrinthine path made of alleys and staircases. Very steep ascents and slippery slopes will exhaust you but they will give you also wonderful glimpses and viewpoints that will amaze you. The laziest ones can take the historic tram 28 but I suggest you walk.

Another district to walk is Rossio, and the long promenade of the wonderful Rua Augusta, full of restaurants and shops, that ends under the arch of the same name and at the praça do Comércio.

The shape of Lisbon is very particular since it is where the river Tagus (Tejo in Portuguese) crosses the Atlantic Ocean. You can relax by the sea in different areas starting from the jetty of the Praça do Comércio. I did the most beautiful walk on the seafront from the Jéronimos Monastery to Bélem Tower. This district has different monuments that are worth looking at, until the magnificent Bélem Tower dating back to the XVI century.

I did more than 20 km a day by foot during my visits and I was exhausted in the evening… nevertheless, I think the best way is walking if you really want to visit Lisbon! 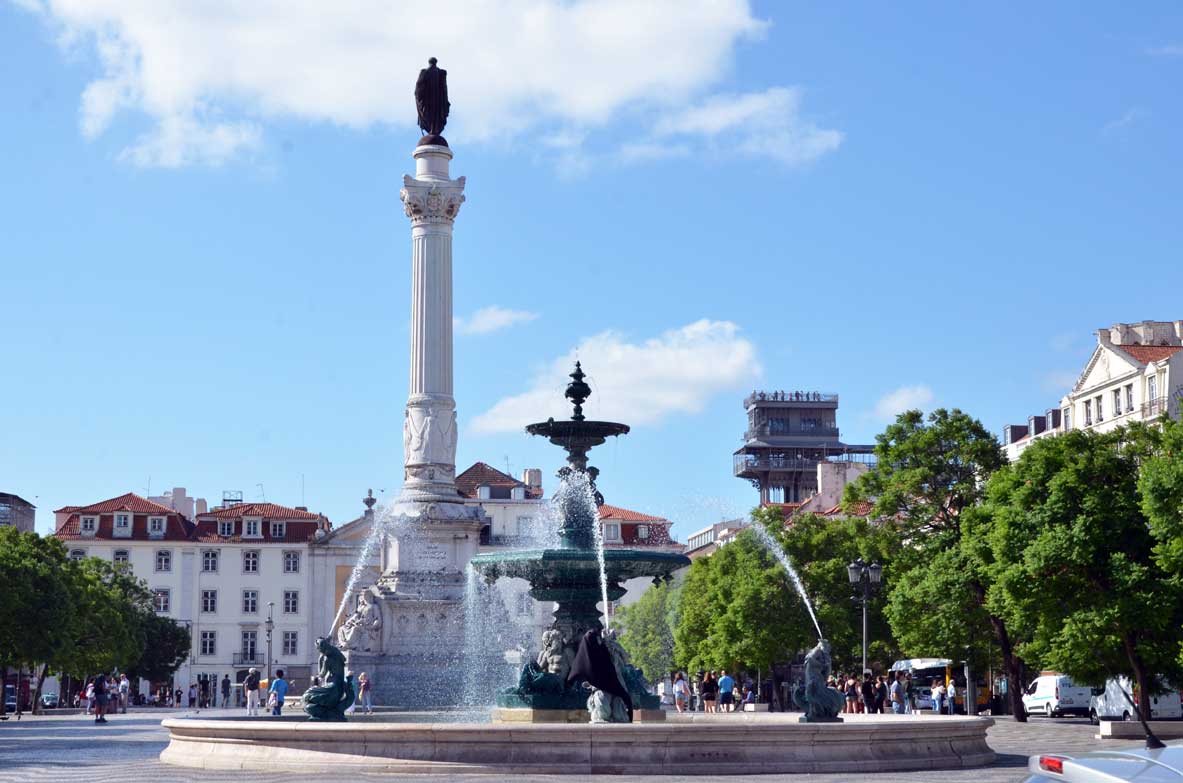 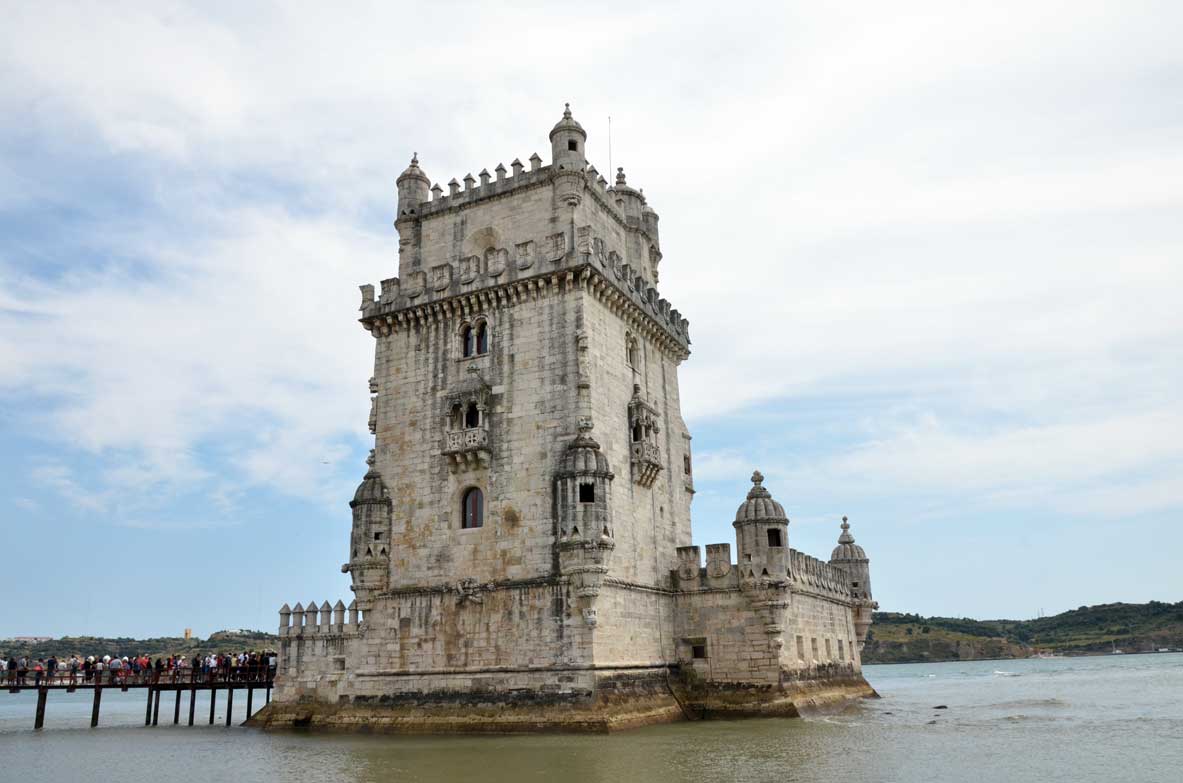 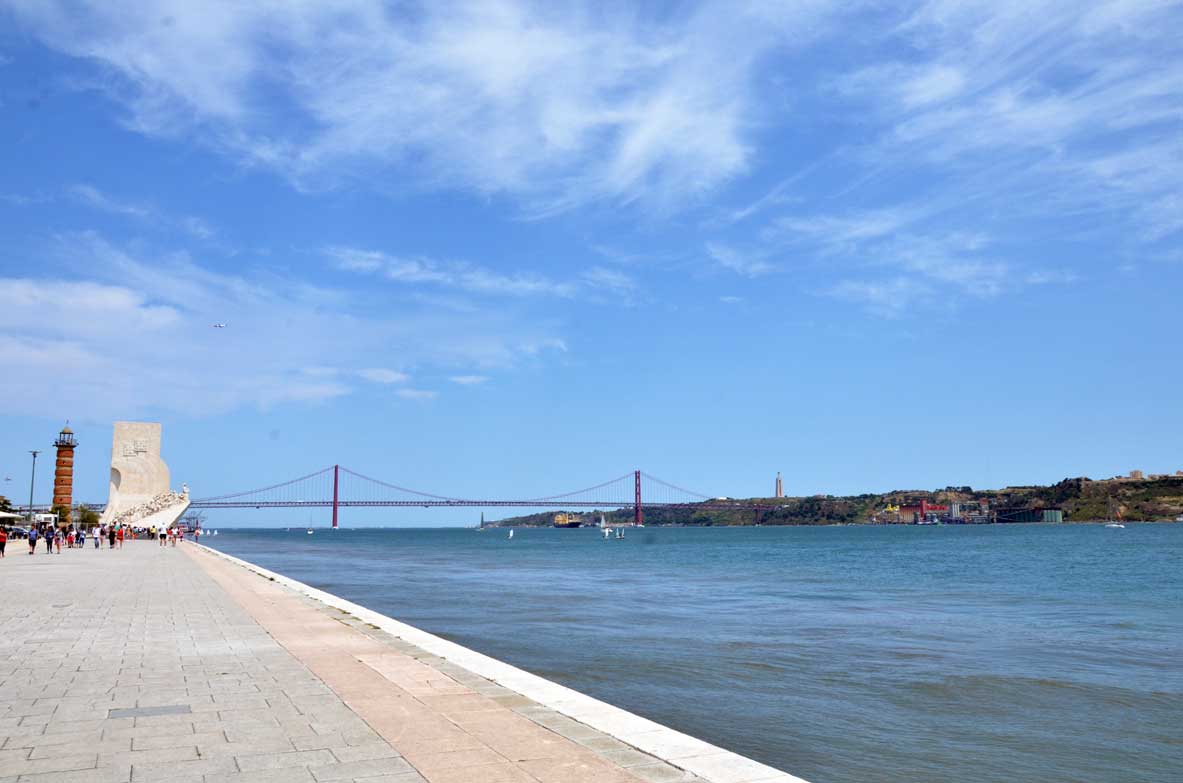 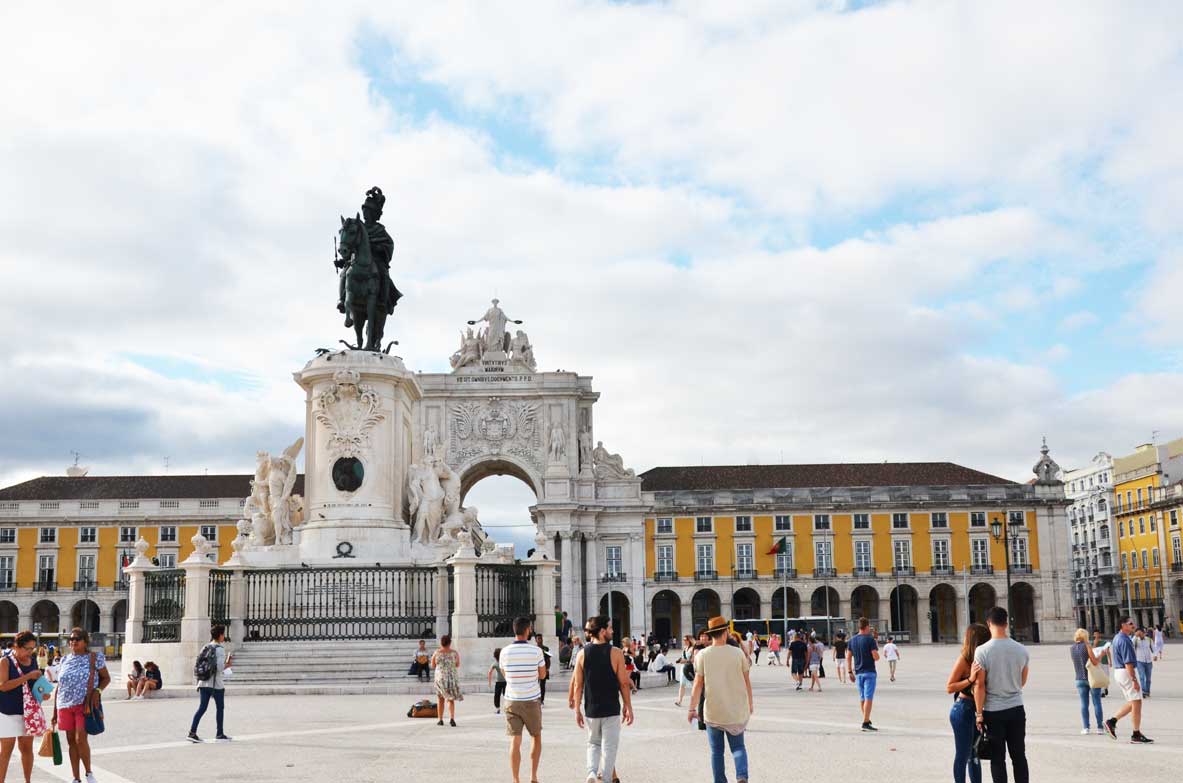 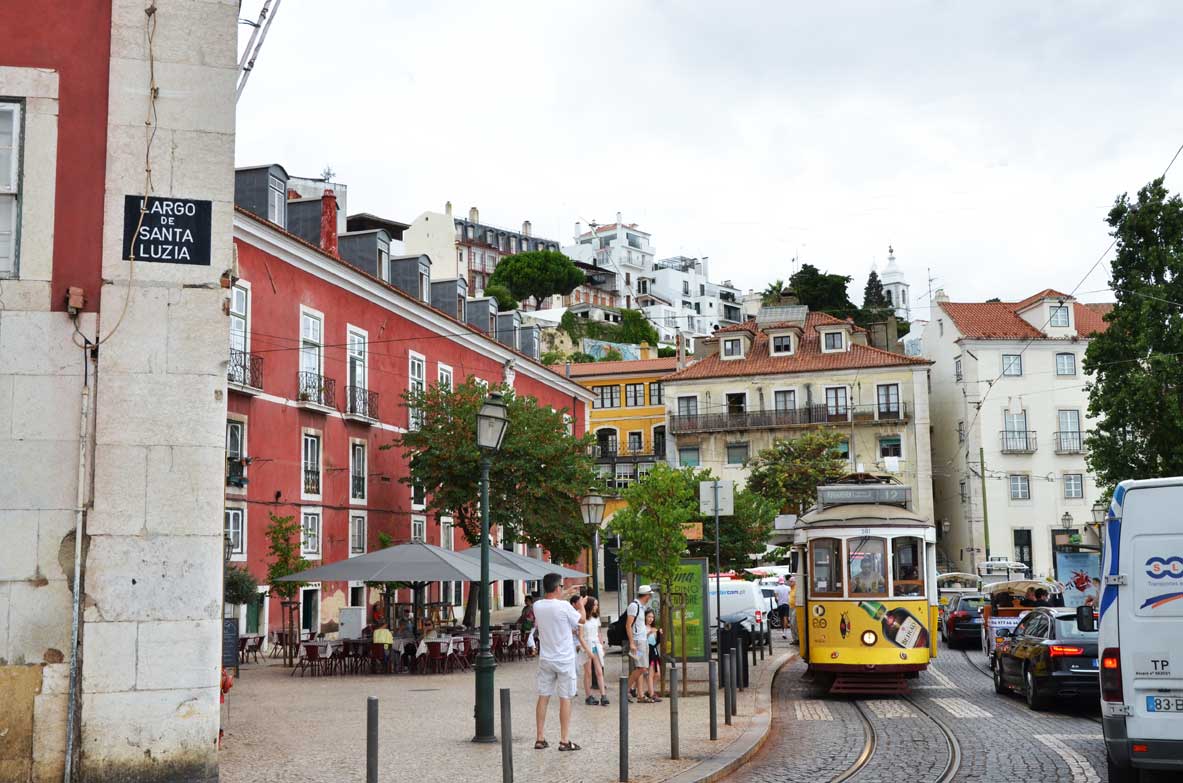 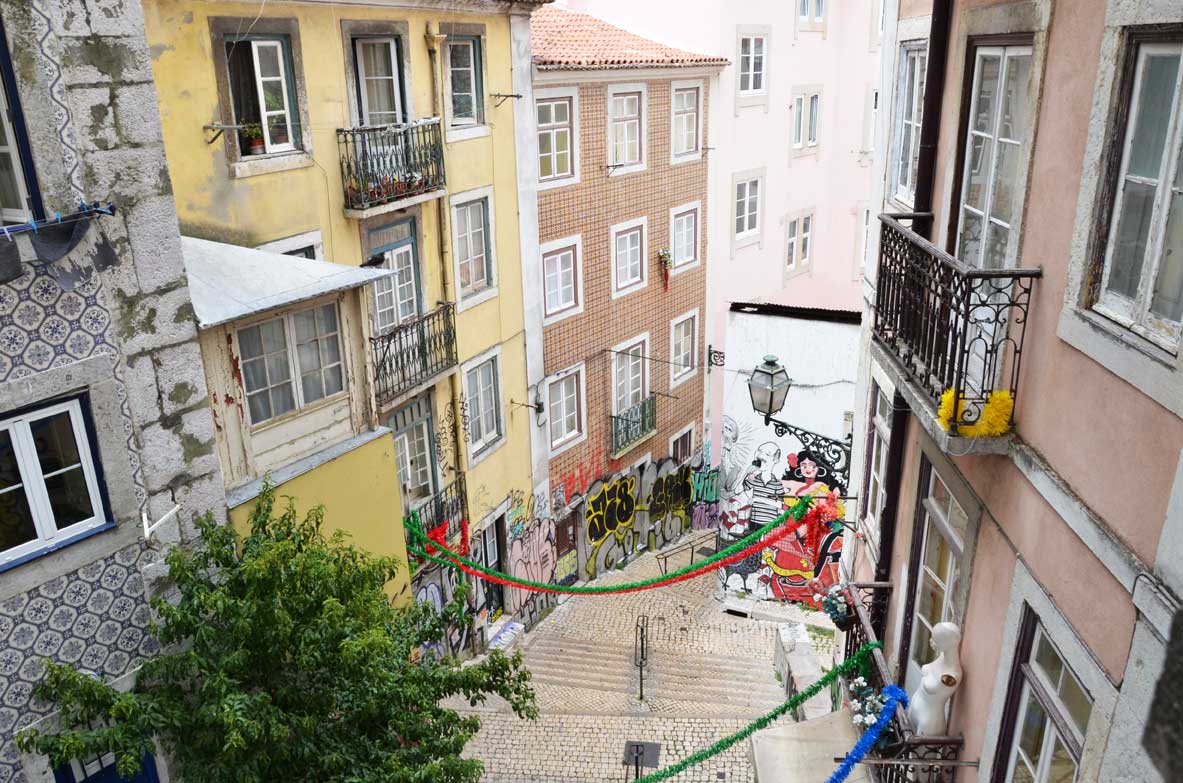 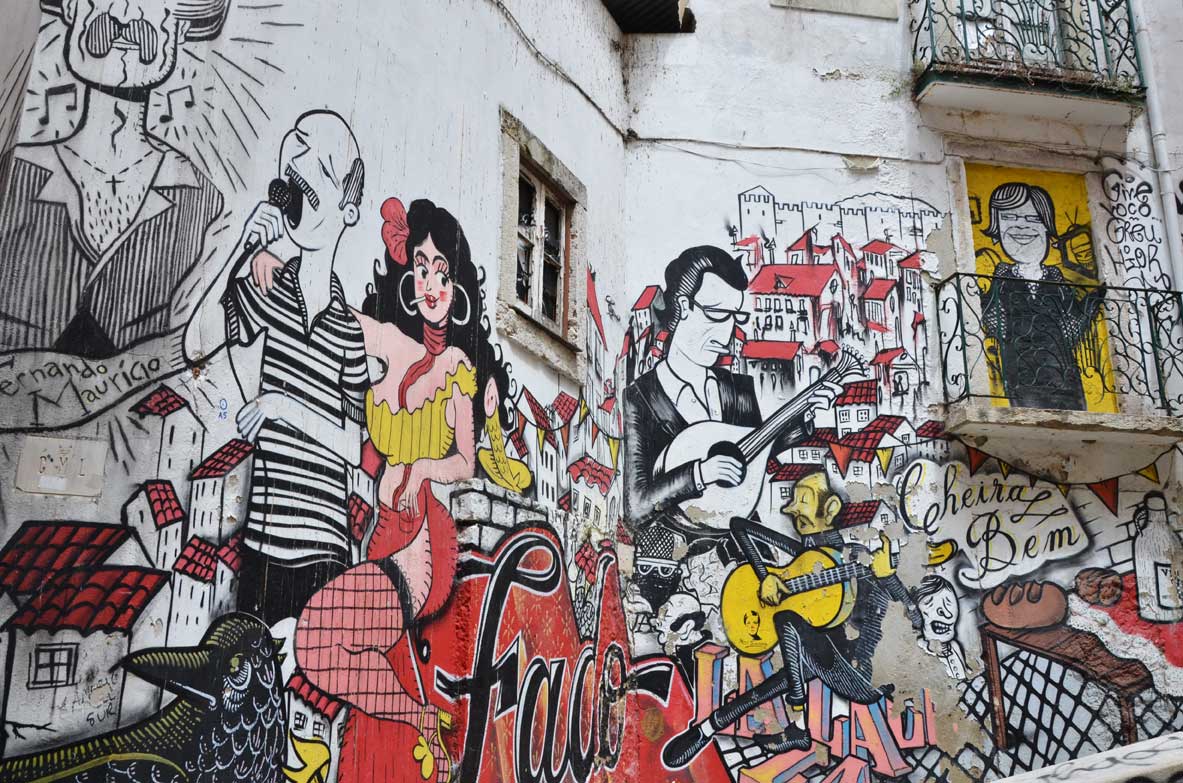 6) Discovering the modern part of Lisbon…

Not everyone knows the modern part of Lisbon in the district Parque das Nações. This area in the southern city was built for the World’s fair of 1998, and so all this part of the Portuguese capital was reevaluated.

When you arrive at the Lisbon Oriente Station, you will notice the futuristic architectures of the architect Calatrava, while walking you will enjoy the two big towers São Gabriel and São Rafael, today luxury apartment buildings. Around the shopping center Vasco da Gama you will find restaurants, science museums, shops and the cable car that you can take to enjoy this very original part of the city.

A place not to be missed in Lisbon! 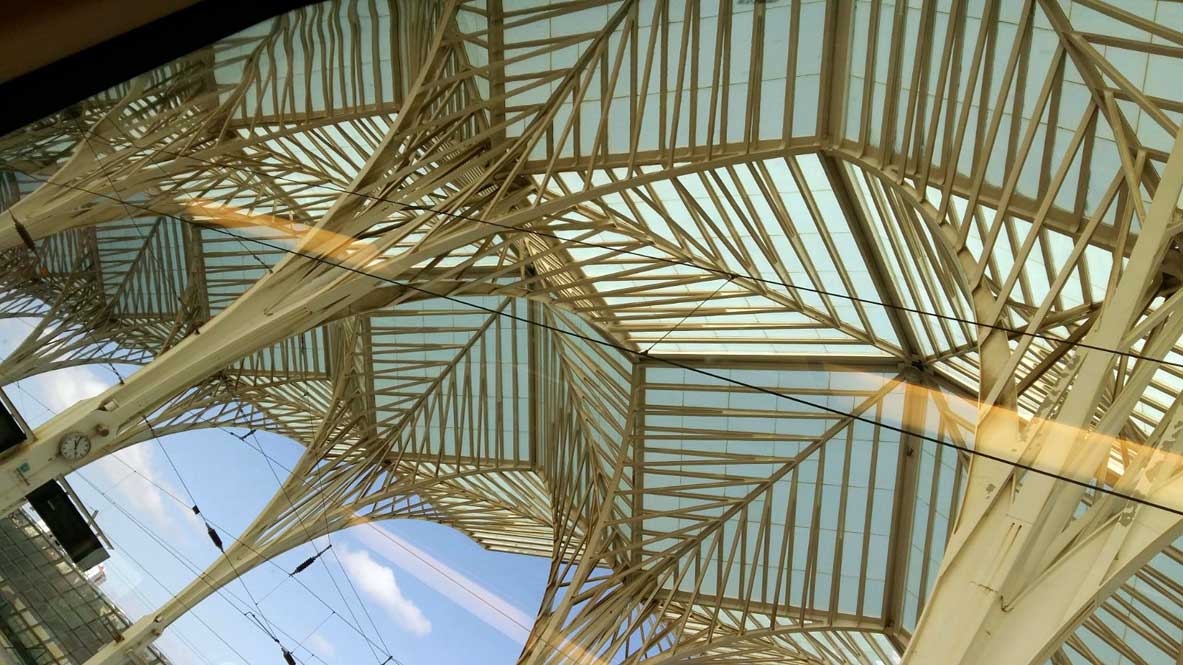 7) Observing the city from above. The most beautiful viewpoints

There are different viewpoints from which it is worth to enjoy Lisbon. One of them is the wonderful Santa Justa Lift, realized in neo-Gothic style. It will give you a wonderful view of the tumbledown Church of Our Lady of Mount Carmel which is right back there.

You can go up on the rua Augusta arch too and enjoy a wonderful landscape.

But there are many more viewpoints… Starting from the terraces of the medieval castle. There are more than 30 miradouros from one corner of the city to the other. I enjoyed the miradouro Santa Luzia on the Alfama and that of São Pedro de Alcântara.

It’s up to you to find the others! 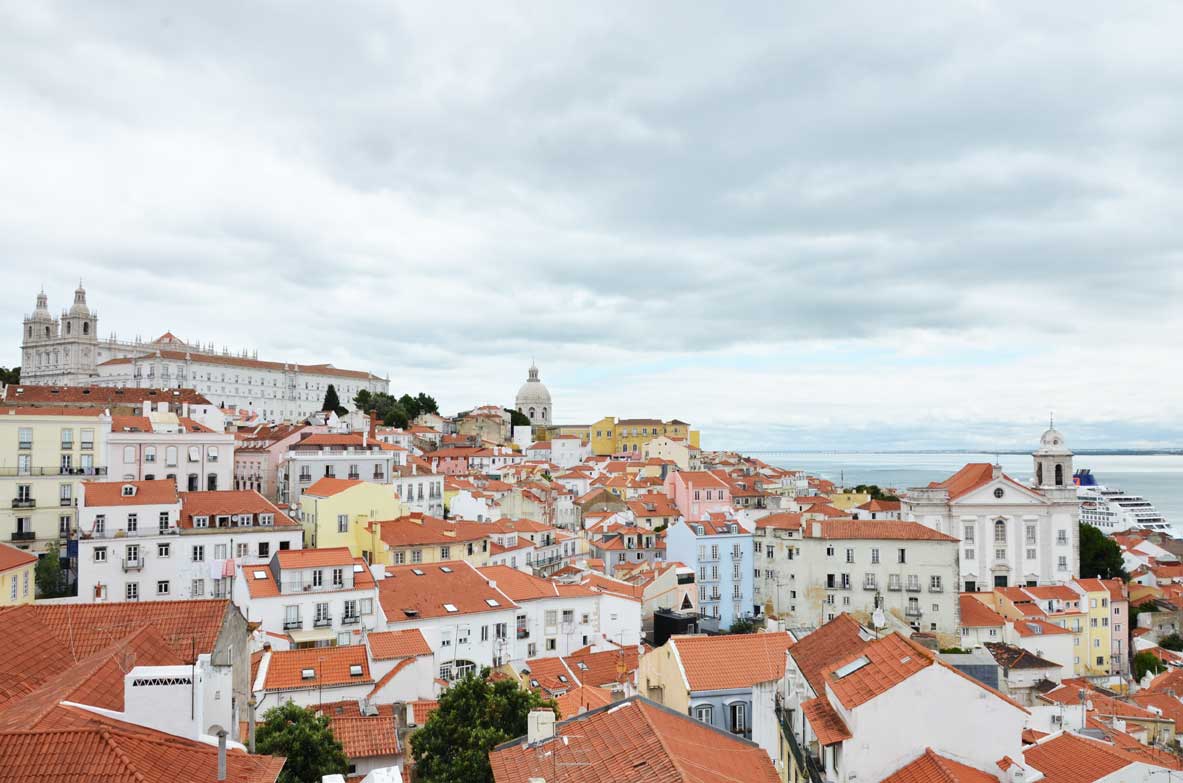 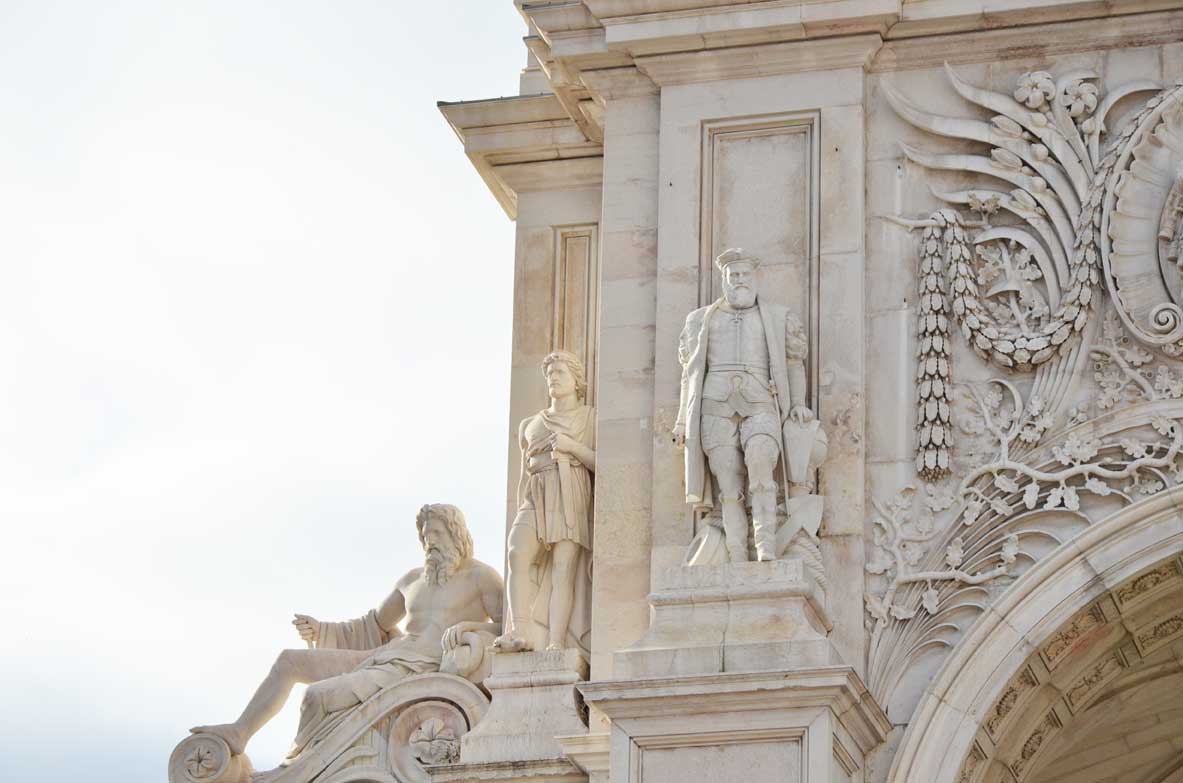 8) This is what you have to taste in Lisbon to swoon!

The Portuguese cuisine is very good and you can’t visit Lisbon without tasting some typical delights. Here are the things you can’t absolutely miss it!

pastel de nata: they are puff pastry flans filled with cream that is caramelized on the top. They cook the best in Bélem.

bacalhau: it is the salted codfish and it is served in many ways. In most of the restaurants, they offer different types of cooking and side dishes.

pastéis de bacalhau: a kind of supplì or salted codfish arancini. They are extraordinary!

chouriço: they are typical sausages.

Sardinhas assadas: a typical dish of Lisbon, they are baked sardines with roasted or boiled vegetables.

vinho verde: The Portuguese wines I tasted were all good, but the vinho verde definitely won. It is a white wine that is little aged. Anyway, be careful, it is alcoholic! 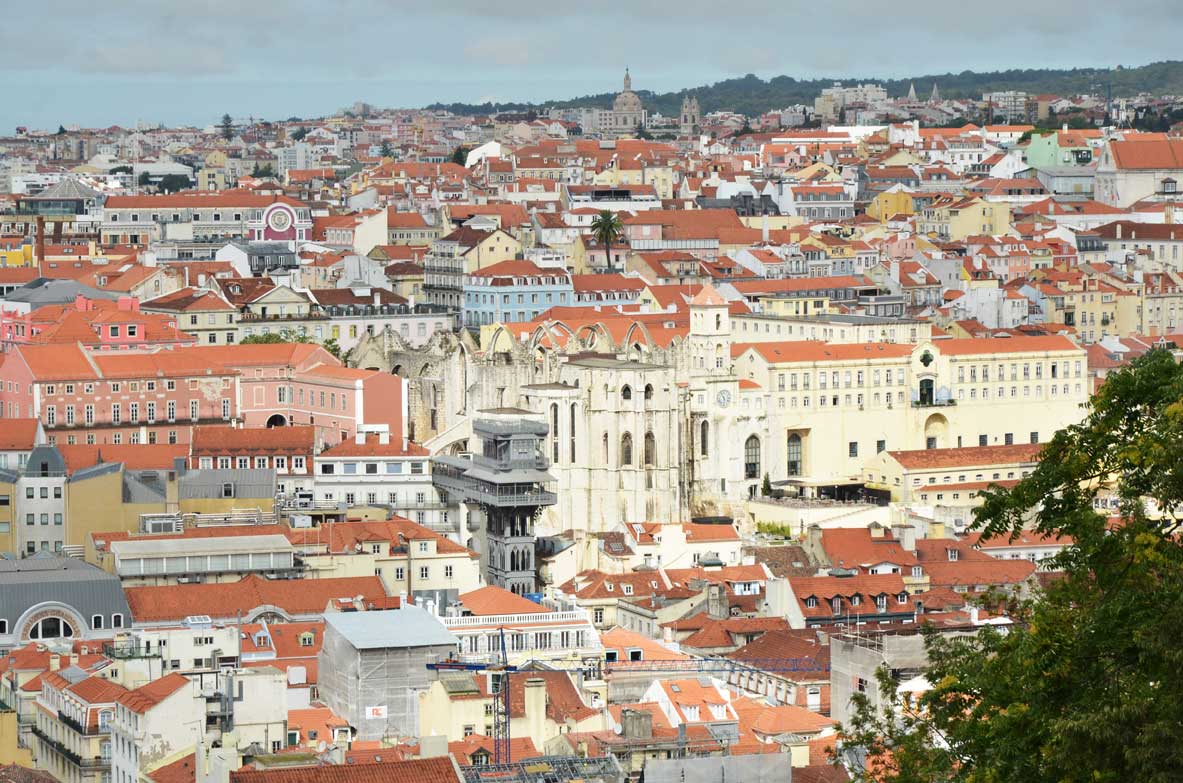 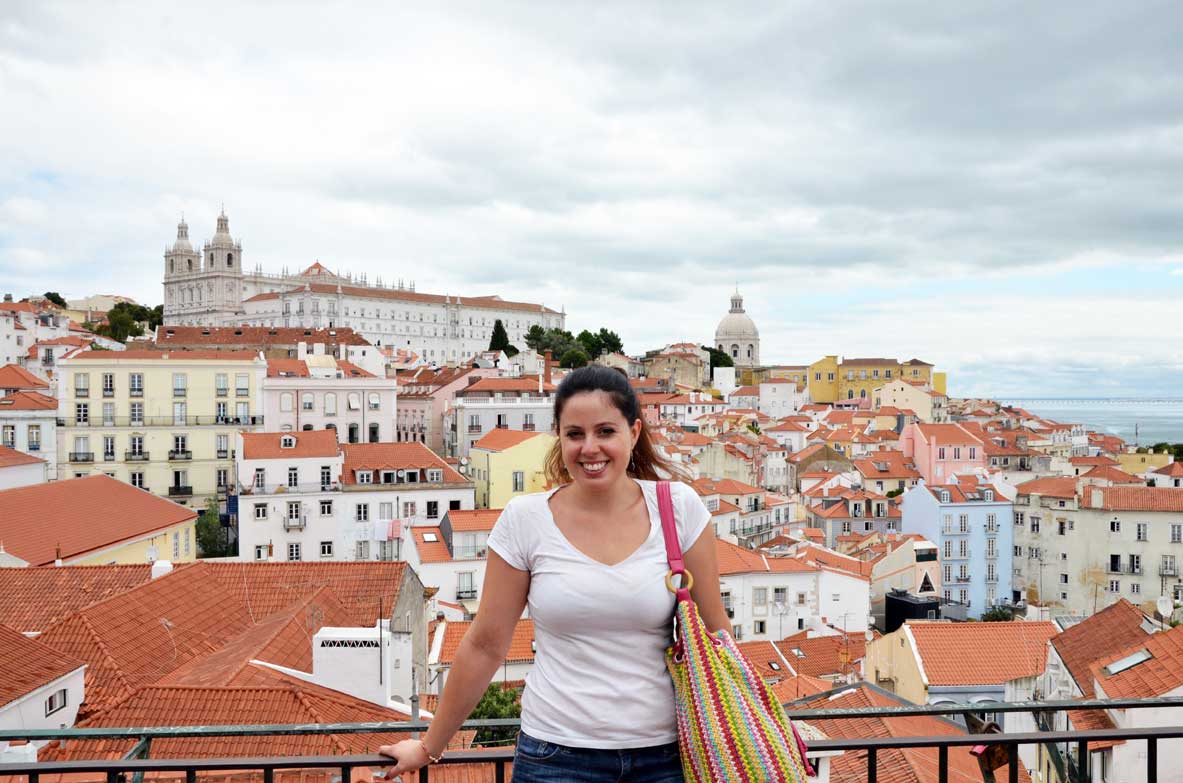 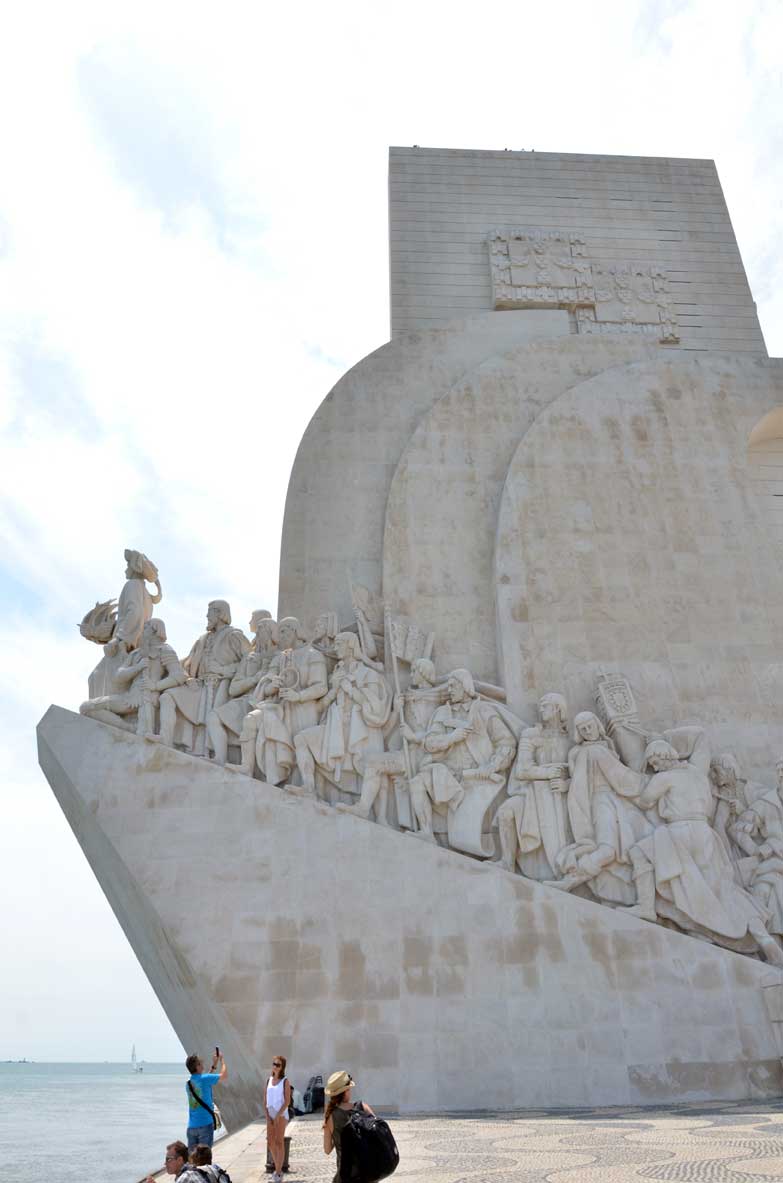 Discover all the Lisbon Card discounts