Home » Travel destinations » Europe » 7 things to see in Foligno, and discover one of the most beautiful towns in Umbria

7 things to see in Foligno, and discover one of the most beautiful towns in Umbria 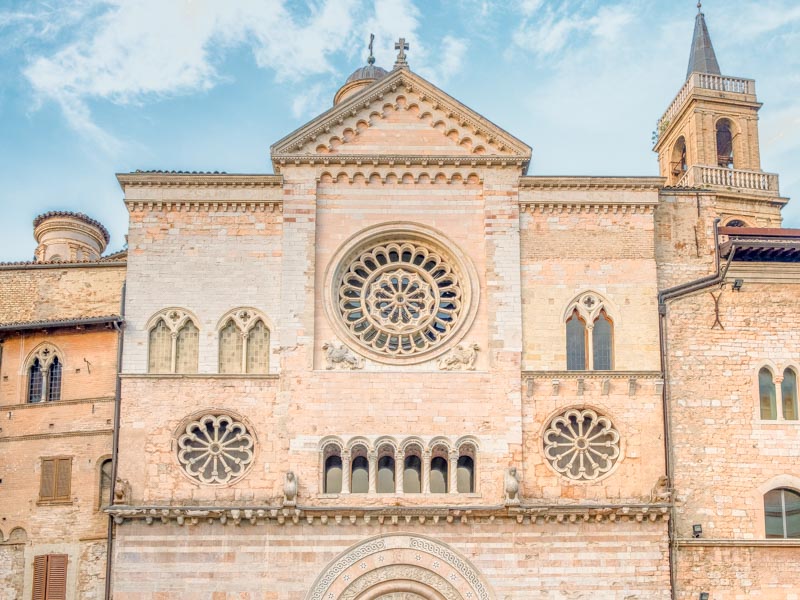 Find out where to stay in Foligno at the best price

Umbria is the ideal place if you are in love with the Middle Ages and the delicious medieval villages. In this green Italian region, where the mountains alternate with the forests, there are some of the oldest cities of the country, considered to have been for several years among the most beautiful villages in Italy. Among the beautiful cities of Assisi, Perugia, Bevagna, Norcia, Spoleto, Gubbio just to name a few, surely you will have asked yourself at least once: but what is there to see in Foligno?

Foligno is one of the most characteristic villages of this beautiful region. Here the Middle Ages have really left indelible traces because, at every street corner, you can find the living testimonies of its rich past.

If you want to visit Foligno you must know that, by tradition, this city is considered the “center of the world”.

Very simply Foligno is located in the center of the Italian peninsula, long considered the center of Europe, and therefore of the world.

In this post I will explain you many other things, I’ll tell you what to see in Foligno, but if you want to discover some of the most beautiful medieval towns in Umbria then you should also read my post on what to see in Bevagna.

Would you like to discover Foligno, the things to see, its history and its uniqueness? 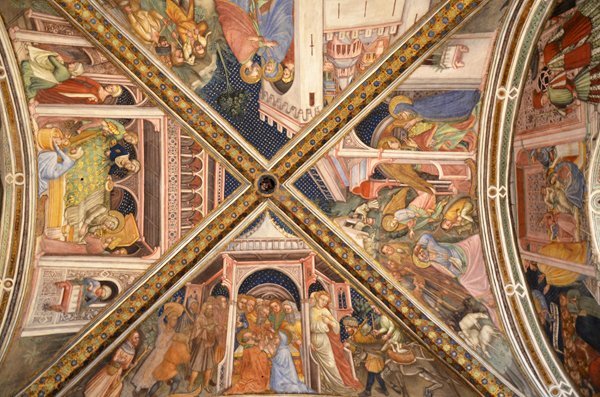 1 – The cathedral of Foligno, San Feliciano

The cathedral of Foligno is much older than it seems. The structure that you can observe now dates back to 1133 but rises on an older building, built between the 9th and 10th century AD

The building is absolutely unusual because, as you can see, it does not have a single façade but two.

The main façade dates back to the medieval reconstruction, but after a few decades, the cathedral of Foligno was equipped with a new transept and enlarged compared to the previous dimensions. Following this expansion, it was possible to build a second and more grandiose side façade which, still today, stands on Piazza della Repubblica.

I advise you to concentrate mainly on the side facade because this is where you will find the most interesting decorations. In addition to the beautiful Romanesque portal, on the façade, there are some classical-style bas-reliefs depicting Federico Barbarossa, bishop Anselmo and the symbols of the evangelists as well as the zodiacal ones.

But the history of the cathedral of Foligno does not end here.

In 1545, Cola di Caprarola did some new work inside the Cathedral and reduced the building to a single large nave, then completely decorated in neo-classical style in 1772-1819, designed by Luigi Vanvitelli and Giuseppe Piermarini.

In my opinion, the most beautiful part remains the ancient medieval structure. Because of these modernizations, in fact, the interior has totally lost its original charm. However, let me point out that inside the Cathedral of Foligno you will find a canopy by Andrea Calcioni, built in imitation of that of San Pietro del Bernini.

Do you want to know a curiosity about this building?

According to the documents of the time, the Cathedral of San Feliciano was built in the place where the saint was martyred in 251 AD. The legend tells us that Feliciano was the evangelizer of the city, and for this reason, he was first tortured and then attacked at a galloping chariot until his death.

Next to the Cathedral of Foligno is the Palazzo delle Canoniche. Today this structure houses the Diocesan Chapter Museum with some interesting works that were once kept inside the cathedral and in the neighboring diocese. Here is also the oldest part of the church, namely the Crypt of San Feliciano, which was recently restored and dates back to the 7th century.

I absolutely recommend you to visit it! 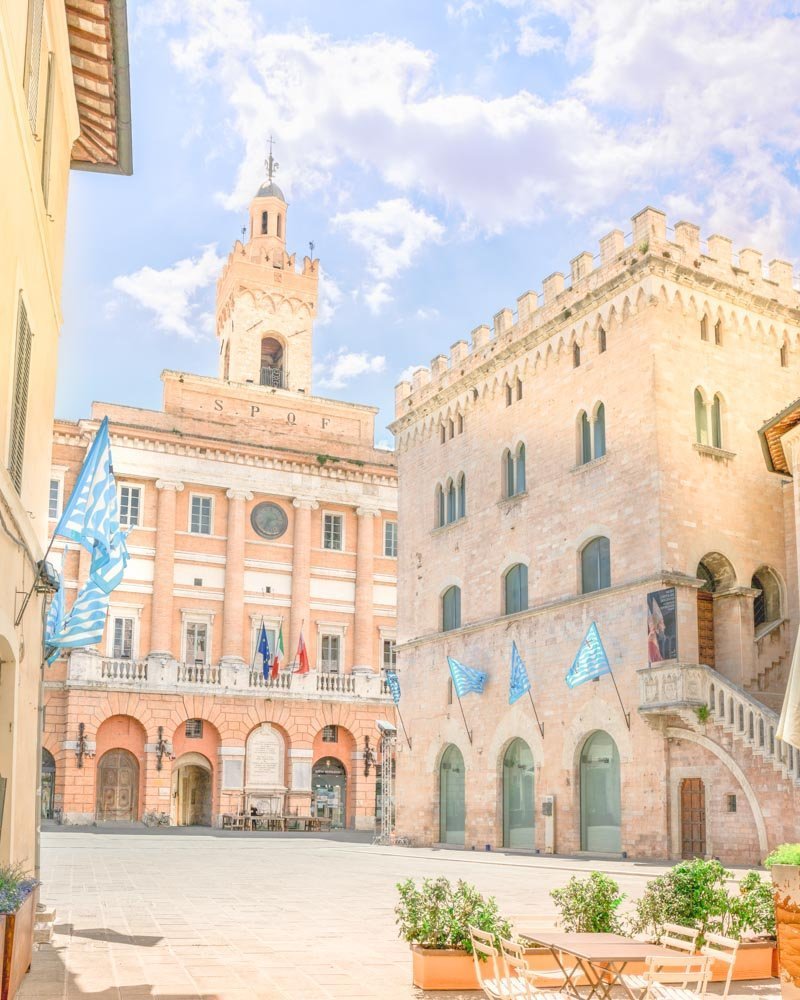 2 – Palazzo Trinci: between the Middle Ages and the Renaissance

After observing the beautiful medieval facade of the Cathedral of Foligno you will surely notice that, on Piazza della Repubblica, there is also another important building. It is the famous Palazzo Trinci and it is another of the most important things to see in Foligno.

The entrance to Palazzo Trinci in Foligno is located right on Piazza della Repubblica, next to the town hall, and next to the secondary façade of the cathedral. It’s not difficult at all to see it because it is an architecture of the beginning of the fifteenth century in late Gothic style.

But why is Palazzo Trinci in Foligno so important?

It is soon said.

In addition to the beautiful architecture, Palazzo Trinci still retains its original late medieval pictorial decoration. The palace was in fact decorated by Gentile da Fabriano and the collections are divided between the archaeological area and the art gallery.

I assure you that the picture gallery is truly wonderful.

In the first part of the visit, you will find interesting archaeological objects from all over the Colfiorito area, such as tombstones with inscriptions in Umbrian and ancient votive statuettes.

On the first and second floor, there is instead the Pinacoteca di Palazzo Trinci, with marvelous frescoes detached from various churches in the area and kept here, in Foligno.

The thing I liked the most was discovering the history of the building: the museum is, in fact, very well set up and very detailed information sheets are available in each room. From the Roman Domus with mosaics to the connecting staircase between one building and another, from the frescoes of the “passetto” that connected the palace to the cathedral of Foligno, Palazzo Trinci is all to be discovered.

Have I not convinced you to visit Palazzo Trinci yet?

Then you should know that the liberal arts and planets hall will literally leave you speechless. Then there is a suspension bridge, the room of the giants and the chapel of Ottaviano Nelli with frescoes of stories of the Virgin dated to 1424.

In short, among the things to see in Foligno you can’t miss the appointment with Palazzo Trinci.

I’m sure it will surprise you. 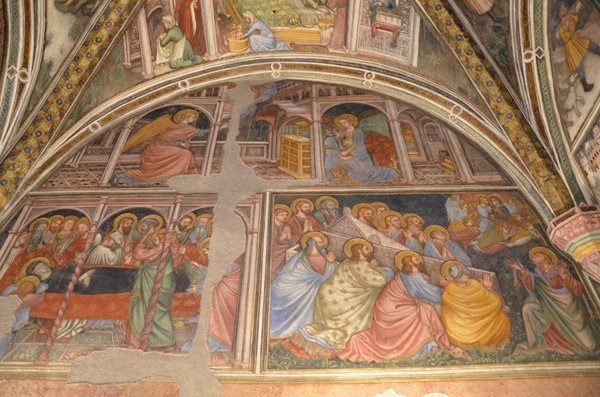 After visiting the Piazza delle Repubblica you should explore the city in the direction of Piazza del Grano. In this place, in fact, there is a beautiful church in Gothic style, built-in 1402. It is the church of San Giacomo in Foligno and it is impossible to not recognize it because it is characterized by very showy white and red bands that decorate the lower part of the facade.

Not far away there is also a wonderful work by Perugino, Raphael’s master, who created a painting for the “Baptism of Jesus”, now kept in the Oratory of Nunziatella. 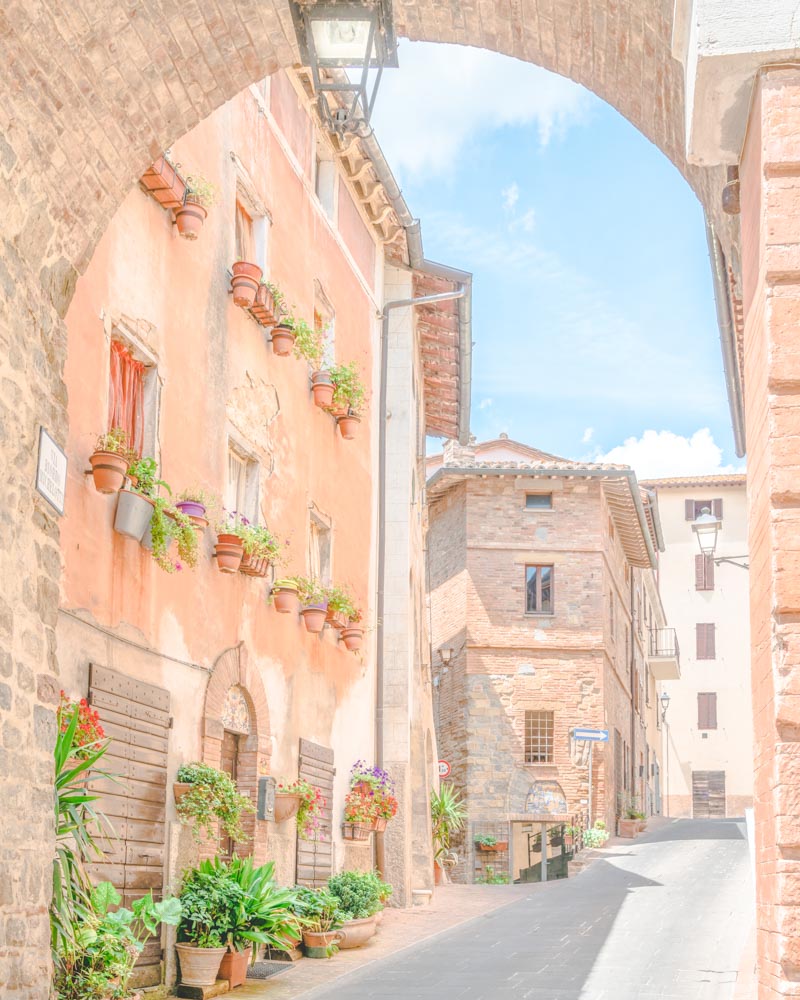 In Piazza San Domenico there is one of the oldest structures in the city of Foligno. This is the church of Santa Maria Infraportas, a splendid Romanesque church from 1138.

Here too, you will find the classic white and pink bands, added during the 19th-century restorations. At the top of the church there is instead a huge window, obtained with elements of reuse of a previous rose window but evidently disproportionate to the harmony of the facade.

Even the small portico is not original but was later built using some columns and capitals dating back to the 11th century.

Unfortunately, even in this case, the restorations have done much damage, depriving the church of its original charm. However, you will find beautiful medieval frescoes along the oldest walls.

What else to see in this square?

While you’re here, I also suggest you admire the church of San Domenico which dates back to the 13th century with a beautiful 14th century bell tower. 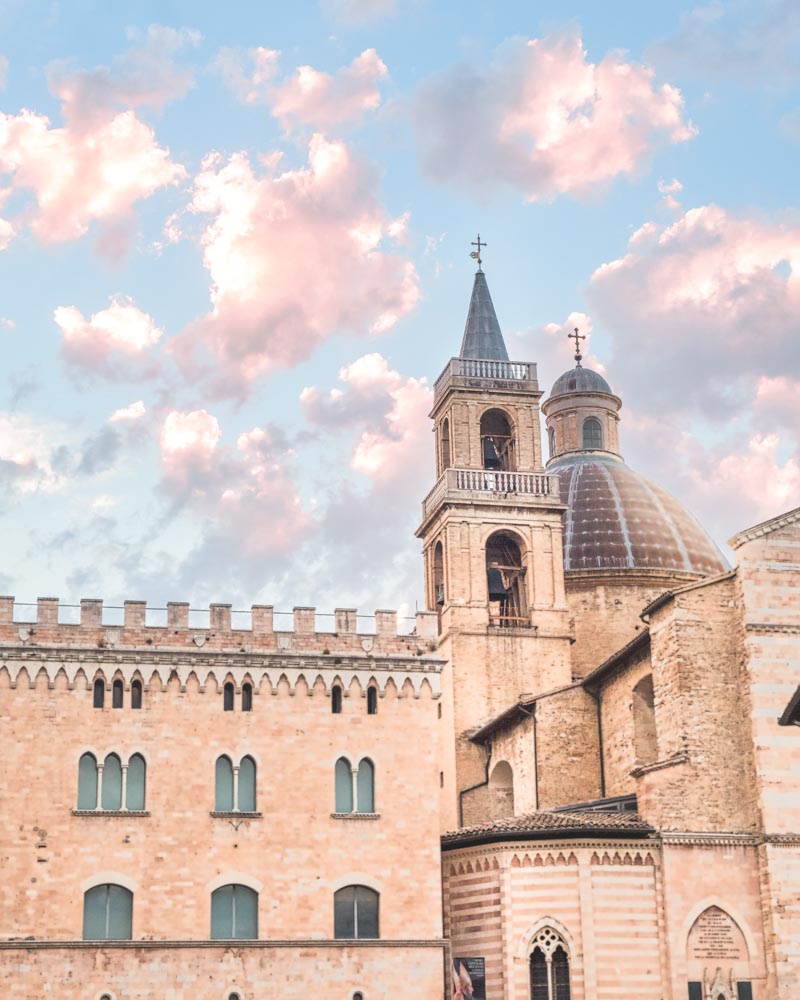 I told you almost all the most important things to see in Foligno but I would like to finish with Piazza Garibaldi.

At the center of this square, there is the statue of the famous “General of the Thousand”, between the church of Sant’Agostino from the Colleggiata of San Salvatore. The latter is the most interesting of the two, with a very particular facade and rich in decorations.

The Colleggiata of San Salvatore in Foligno was originally an ancient Benedictine abbey, built between the tenth and twelfth centuries, and fortunately still retains much of its medieval charm.

I stayed in the center of this square for a while. The thing that struck me most was, above all, the perfect harmony between the oldest structures and modern buildings. I don’t know why, but this square gave me a deep sense of peace.

6 – The Giostra della Quintana in Foligno

Among the things to see in Foligno, I would also like to tell you about a beautiful event that every year attracts thousands of tourists from all over Italy. The city is, in fact, renowned for the famous “Giostra della Quintana”, a very suggestive historical re-enactment that recalls the medieval past of the city.

No, it is completely different from the famous Gaite market which takes place in Bevagna or with the “Palio di Siena”, but it is a very special event

You know those ancient medieval rides, those in which the riders clashed on horseback with their long spears. That’s right, the Quintana carousel of Foligno will take you back in time and will make you rediscover these ancient medieval games.

A very important thing that you will notice walking around Foligno is an inscription that you will find almost everywhere: it is the abbreviation S.P.Q.F.

Like the famous Roman SPQR, here the abbreviation is for “senatus populusque fulginei” or “the senate and the people of Foligno”. I found it very funny and it derives from the fact that Foligno was a “municipium” and then an independent town from ancient Rome until the Middle Ages.

Did you know that? 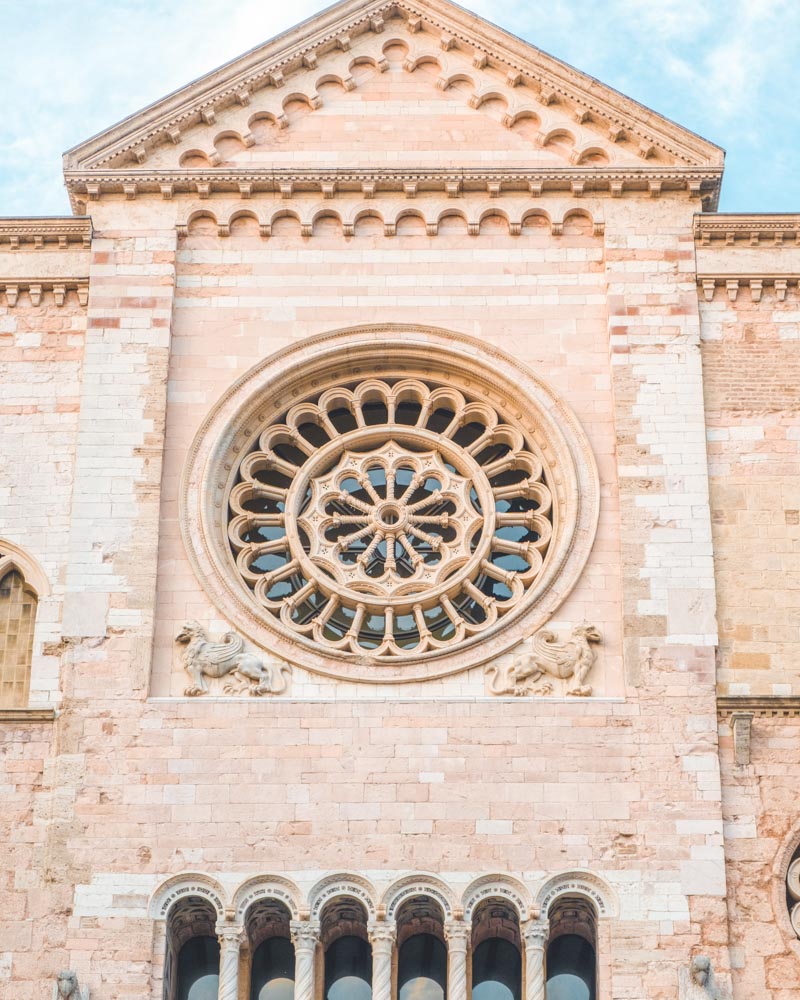 Are you planning to visit Foligno and you need some advice?

If you are looking for a hotel in Foligno, you want to book some activities or tickets, please write to me in the comments the budget you have available and the dates you are interested in.

I will help you to find the best solutions for your needs. 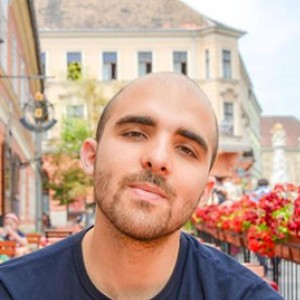 Discover all the offers for hotels in Foligno