Home » Travel destinations » Europe » Piazza dei Miracoli in Pisa, one of the most beautiful squares in the world

Piazza dei Miracoli in Pisa, one of the most beautiful squares in the world 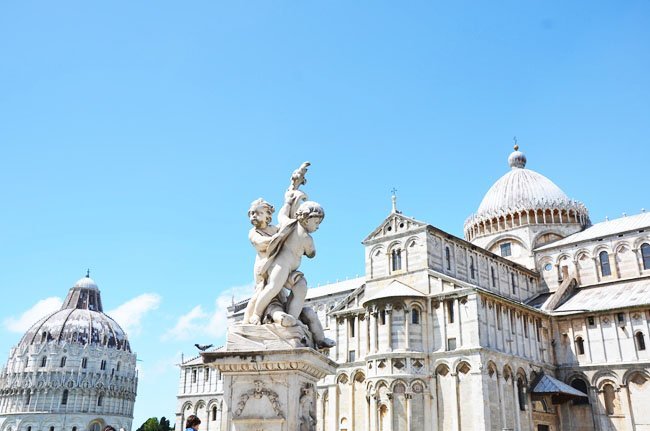 Skip the line ticket for the leaning tower of Pisa

The Piazza dei Miracoli in Pisa is one of the most beautiful squares in the world and has been included in the UNESCO heritage.

In this beautiful square of Pisa, you can find 4 white masterpieces of medieval monumental art on a large expanse of green lawn. It is here that the famous Tower of Pisa, the Camposanto, the Baptistery and the Duomo are located. The last two monuments are so special that they gave life to an original style, the “Pisan Romanesque”.

This architectural complex once stood near the ancient fluvial port of Pisa, located on the banks of the Auser river, which has now disappeared. This place was chosen precisely because of its centrality and, in 1064, Pisa’s cathedral was built here to celebrate the greatness of the city, which at the time was a powerful maritime republic.

Below I have collected some interesting information and curiosities that can be useful if you want to visit Pisa and my experience in one of the most beautiful places in Italy.

What to see in the Piazza dei Miracoli in Pisa

If you are visiting Tuscany, consider making a stop to see the Piazza dei Miracoli in Pisa. This square was built with the proceeds of the Pisan loot after the victory over the Arabs in Sicily, in the twelfth century. It contains a series of Romanesque masterpieces: in fact, the cathedral, the baptistery, the camposanto and the very famous bell tower rise very close.

Many are passionate about the charm of this place, the white monuments seem to bloom like flowers in a field and it seems that they were built in order to reproduce the stars of the constellation of the ram, a zodiac sign that symbolizes rebirth and spring.

The sign of the ram, in fact, takes place on March 21, the day of the spring equinox 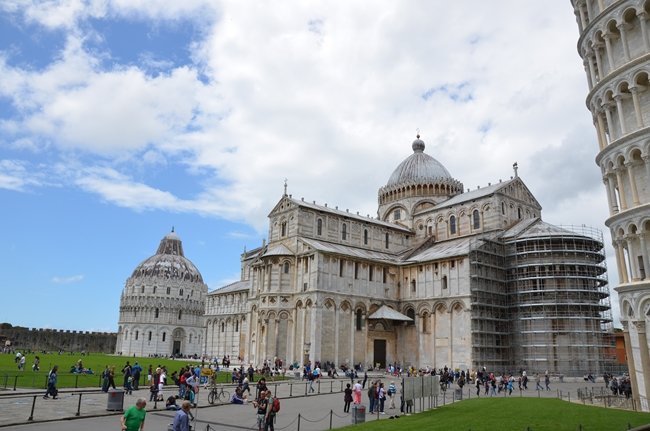 The tower of Pisa, that’s why it’s called a leaning tower

The leaning tower is an attraction famous all over the world. It is so famous that it has been nominated as one of the wonders of the modern world. This bell tower in fact, began to present structural failures even during construction, which lasted from 1173 to the fourteenth century.

The most important architects of the time are committed to trying to correct this mistake but without success.

The tower of Pisa was then the subject of numerous restorations over the centuries, because the sinking became more and more accentuated: fortunately it did not collapse because its center of gravity is still inside the base of support. 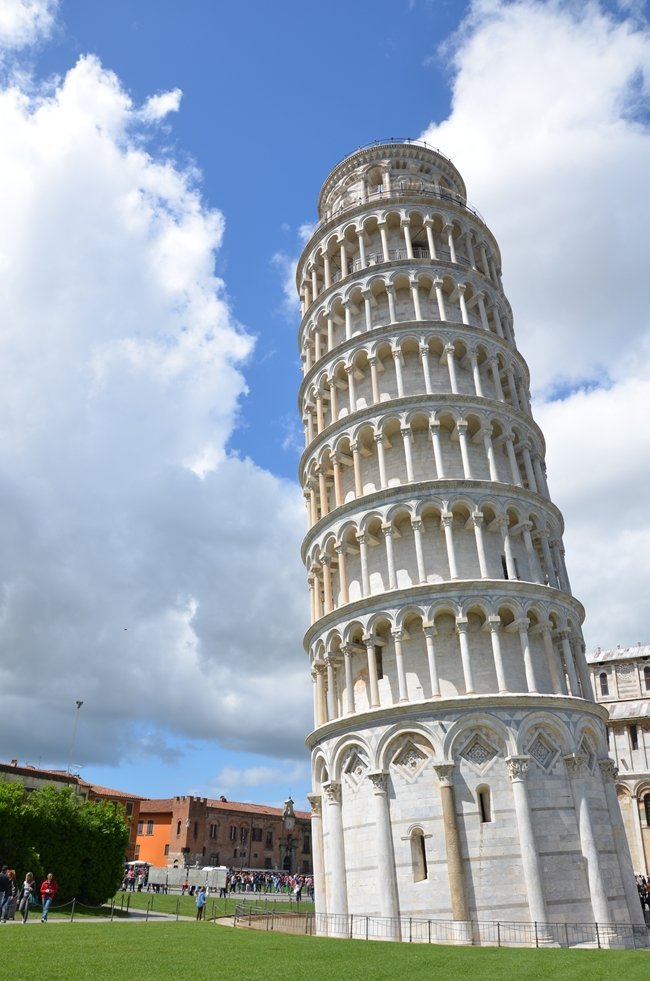 The numbers of the most famous bell tower in the world

How tall is the Tower of Pisa?

This extraordinary bell tower is 56 meters tall, weighs the beauty of 14,500 tons and is UNESCO heritage along with the rest of the Piazza dei Miracoli since 1987.

Every year more than 500,000 people climb its steps to observe the square of miracles from the top of the tower.

The hanging tower is perfect for taking funny pictures, but it should be remembered that if this bell tower is certainly unique in the world, it is certainly not the only wonder to see in Pisa, a small city with many facets and attractions. 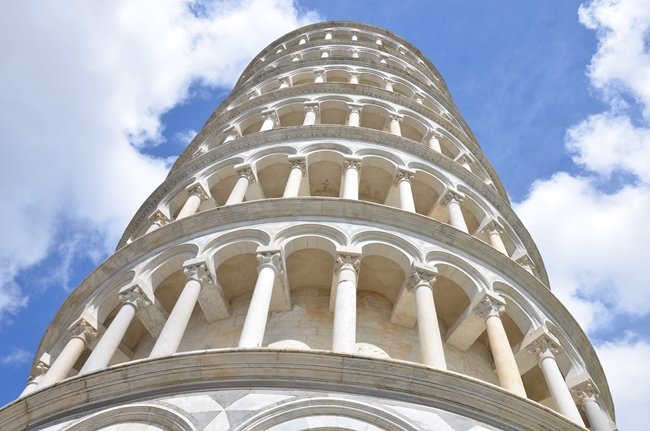 The cathedral of Pisa

Right in the center of the square of miracles in Pisa, stands its cathedral.

The cathedral was built in 1064 to commemorate the city’s victory over Muslims in the port of Palermo the year before. It is the masterpiece of the architect Buscheto and fuses elements typical of the Tuscan Romanesque style but also of the Arab and Byzantine world (remember that Pisa was an international port where cultural and economic exchanges took place).

But why was the Duomo of Pisa built outside the walls?

The position was chosen for two reasons, one of practical order and the other of ideological order: within the city, in fact, there was no space for such a monumental building, and building it outside the walls was a way of saying “we are so powerful that we do not need protection “. In short, propaganda! 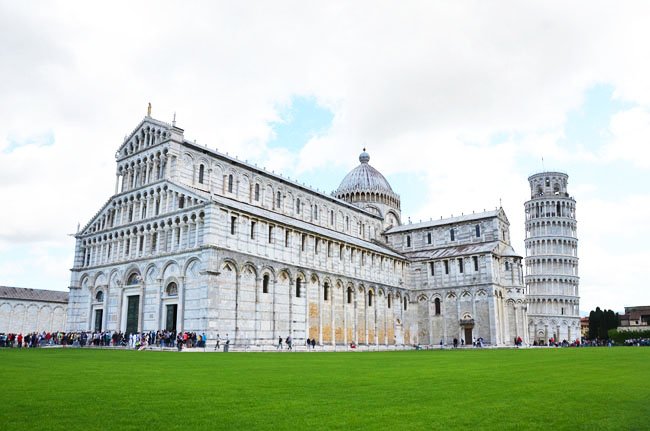 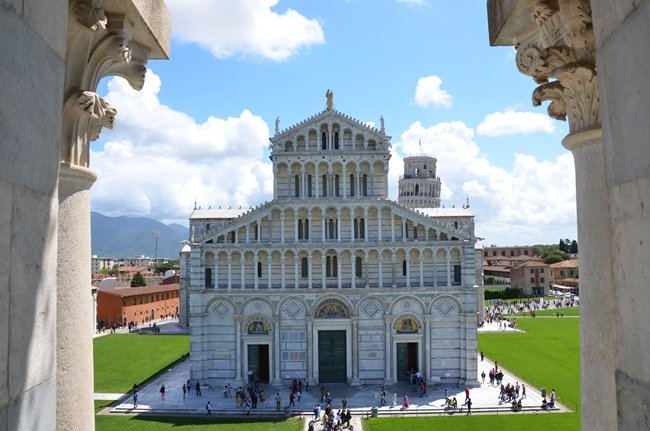 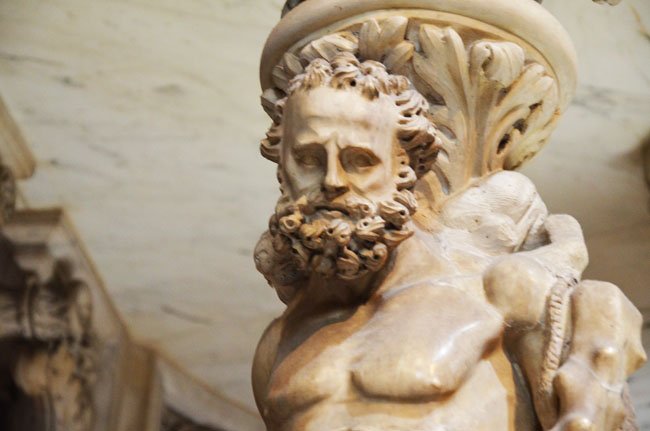 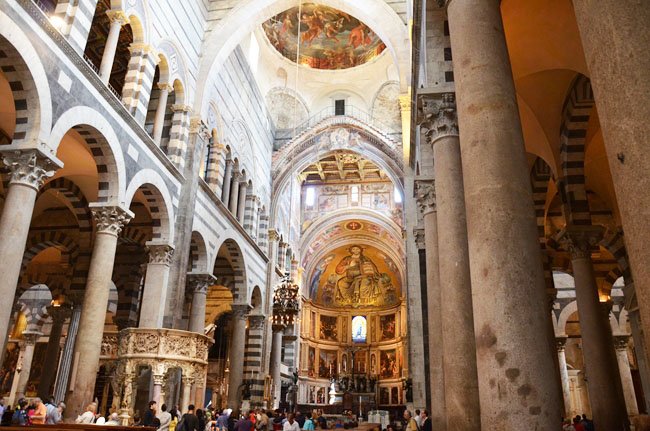 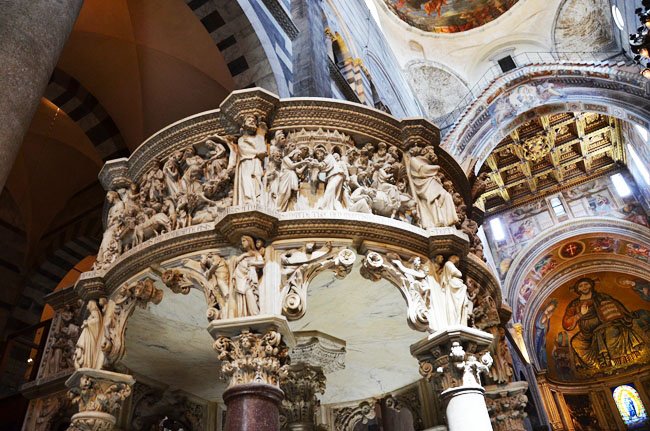 History and curiosities on the Camposanto of Pisa

On one side of the Piazza dei Miracoli in Pisa, stands the Campo Santo, a monumental cemetery built like a cloister.

This structure is itself a relic: the earth that is in the center of the Holy Field of Pisa comes from the Holy Land. It was taken from Mount Golgotha and transported to Pisa during the fourth crusade (for this reason the holy field name).

The Gothic arches that support the porch of the Camposanto were built in the 15th century. The extraordinary pictorial decoration of the frescoes dates back to 1360. They are a work of Buonamico Buffalmacco and Francesco Traini and represent the theme of life and death and of universal judgment.

If you look at the plasticity of the figures, the realistic details and the fantasy of the whole, you can see that it is an absolutely unique work. If you pay attention you will be able to find a man who stops his nose because of the stench of rotting corpses. In short, a clear representation of fourteenth-century life.

The tombs in the Campo Santo of Pisa are a masterpiece: we find Roman, medieval and nineteenth-century sarcophagi. Restoration works began in 1945, allowing the conservation of the precious sinopias, frescoes by great masters who decorated the cemetery until 1944. These were in fact destroyed by the fire of the Allied bombing.

Thanks to the intervention of the restorers, the preparatory drawings of these frescoes can now be seen at the museum of the Synophies of Pisa 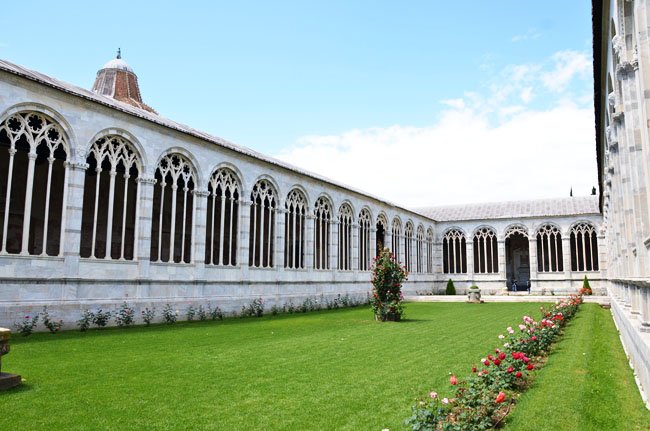 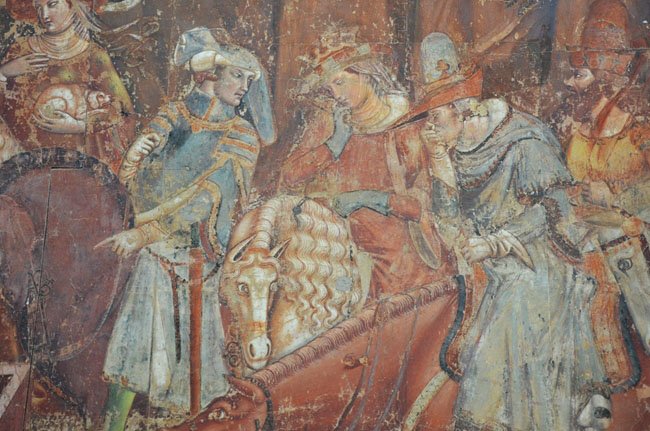 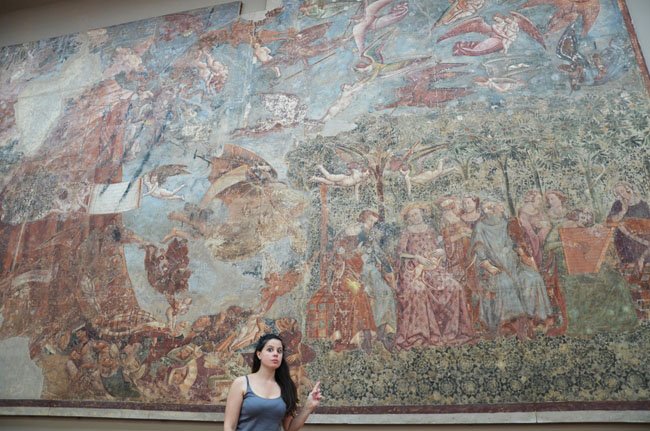 The baptistery of Pisa, a jewel of acoustics

On the Piazza dei Miracoli in Pisa stands the baptistery dedicated to San Giovanni.

It was started in 1153 and is the largest baptistery in Italy (it has a circumference of 107.25 m) as well as having an exceptional acoustics: I was there just at the moment of the demonstration and you can hear the result below in the video!

The Baptistery of Pisa was designed by architect Diotisalvi, has a very simple and linear Romanesque style structure, later enriched by the Gothic style interventions by Giovanni and Nicola Pisano.

Many sculptures of these two great artists were removed in the 19th century. Today they are kept in the Cathedral Opera Museum. The interior is bare and simple but retains a great medieval masterpiece, the pulpit by Nicola Pisano, sculpted between 1255 and 1260.

It was the first hexagonal shaped pulpit and includes scenes from the life of Christ and other symbolic meanings. The work is already approaching the Renaissance for the expressiveness of the figures and the classic references and is a triumph of feeling, tension and emotion. 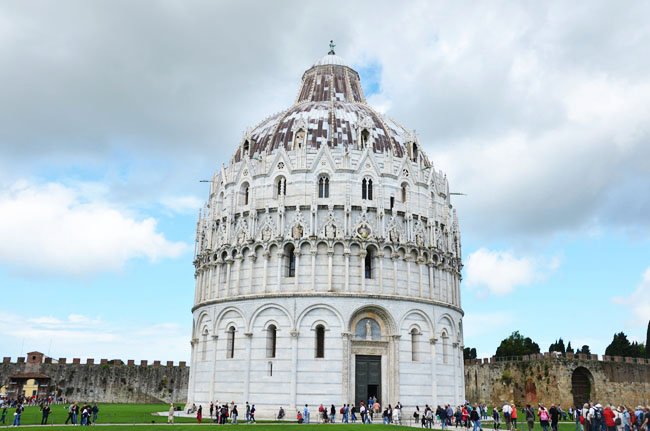 Skip the line ticket for the leaning tower of Pisa