Home » Travel destinations » Europe » Everything you should know about Eros and Psyche, Canova’s masterpiece

Everything you should know about Eros and Psyche, Canova’s masterpiece 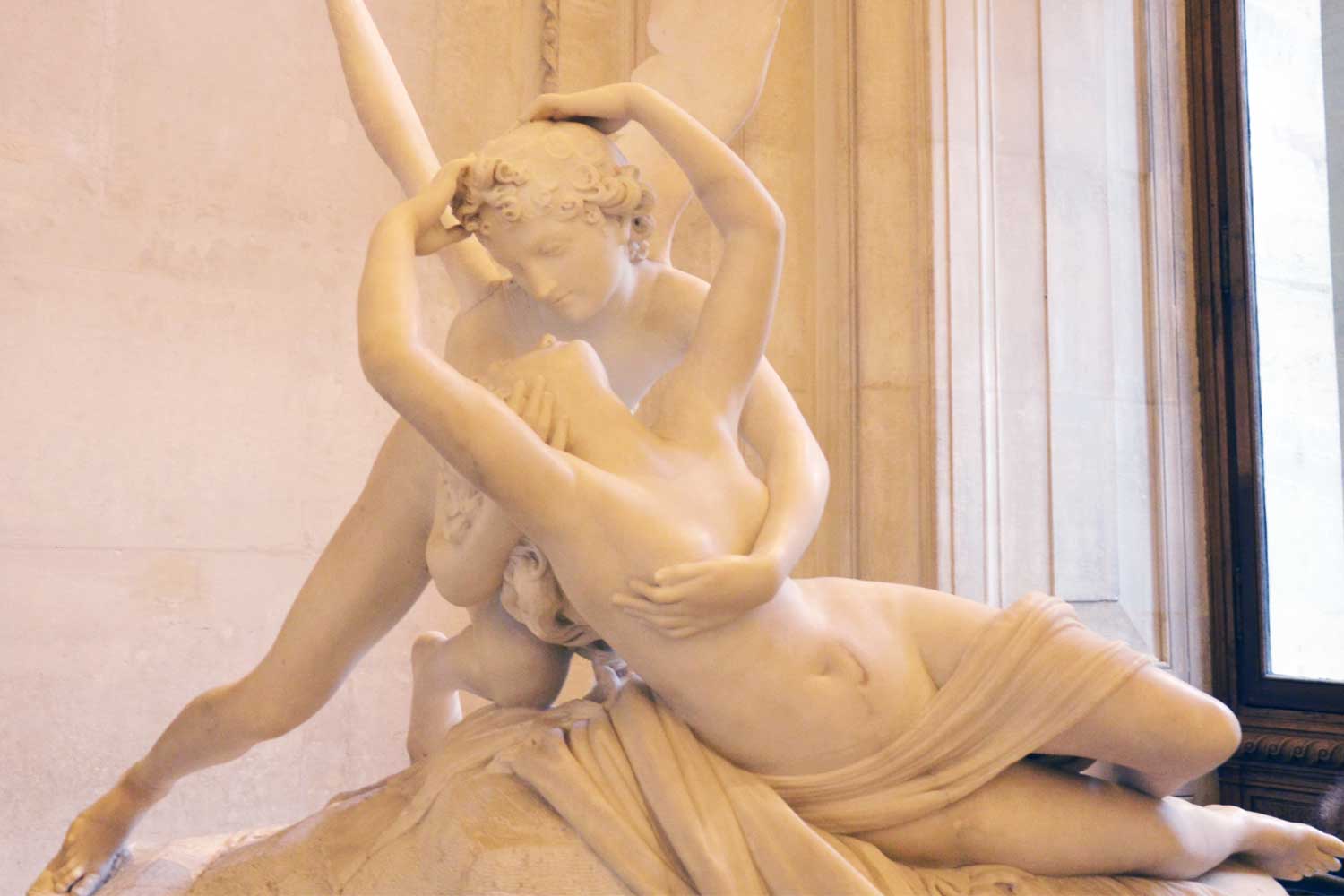 Eros and Psyche is one of the most famous masterpieces by Antonio Canova. This sculpture in white marble was built between 1787 and 1793 and depicts the moment when the two lovers are reunited after a long and difficult separation.

I had the opportunity to admire Love and Psyche several times at Louvre in Paris and each time he conveyed to me that sense of delicate sweetness that I would have been observing for hours. The location of the lovers here is studied in detail by Canova, immobilized forever an instant before their very famous kiss.

Below I’ll tell you some curiosities about Canova’s Eros and Psyche.

Ready to find out?

The legend of Eros and Psyche

The legend of Eros and Psyche is narrated in Apuleio’s “L’asino d’oro” or “Metamorfosi”, one of the most famous novels of the classical era (2nd century AD).

This story spoke about a young and beautiful woman. Psyche was so nice that attracted the envy of the goddess Aphrodite. She send her son Eros (or Love) to make Psyche fell in love with the ugliest and crude man in the world. However, the young god fell in love with the girl after injuring himself with one of his arrows.

Taken from passion, disobey the mother. Eros locked Psyche in a magical castle, going to visit her every night with the help of darkness but making her swear never to look at him.

The girl, intrigued by the strange prohibition and instigated by the sisters, broke the oath and looked at the appearance of her lover with an oil lamp. Eros, aware of the betrayal, abandoned the poor girl.

Aphrodite then subjected Psyche to numerous and difficult trials to have her reunited with her beloved. The last test was to go down to the underworld to ask Proserpina, wife of Hades, to give her a part of her beauty. The goddess gave Psyche an ampoule containing a soporific liquid that made her fall into a deep sleep. When Eros heard of the cruel trials that his beloved had passed through him, he descended into hell and awakened her with a kiss.

The artist decided to immortalize the moment of the kiss between Eros and Psyche, depicting them in that instant in which they surround themselves in an eternal embrace rich in delicate passion. 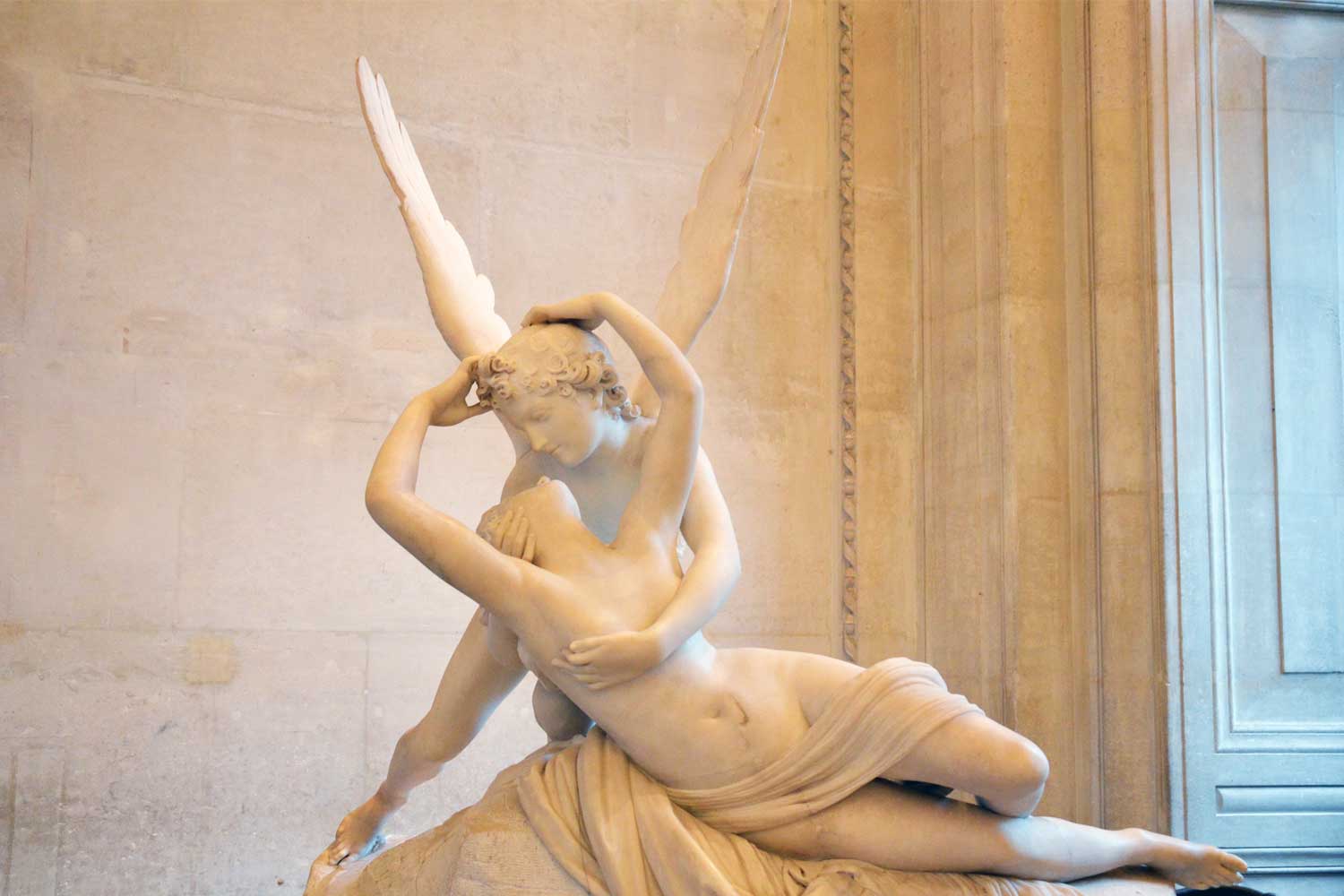 Canova between balance and neoclassicism

Canova sculpts the awakening of Psyche as in a snapshot.

Eros surrounds her waist and gently holds her head while she tends her head backward, hugging him.

The group is very balanced and perfectly respects the canons of beauty of neoclassicism. The thrusts, the stretched leg of him and her bent knee, the intertwining arms, the wings and the rock on which the young woman is lying, all lead back to a search for harmony and balance.

Eros’s wings and the legs of the two form an X that has its center at the moment of the kiss. In the same way, the interweaving of the arms focuses attention on the two faces, in a circle in which the beautiful Psyche frames the face of her Lover.

The beautiful natural and beautiful ideal pursued throughout life by Canova, reach their peak here. 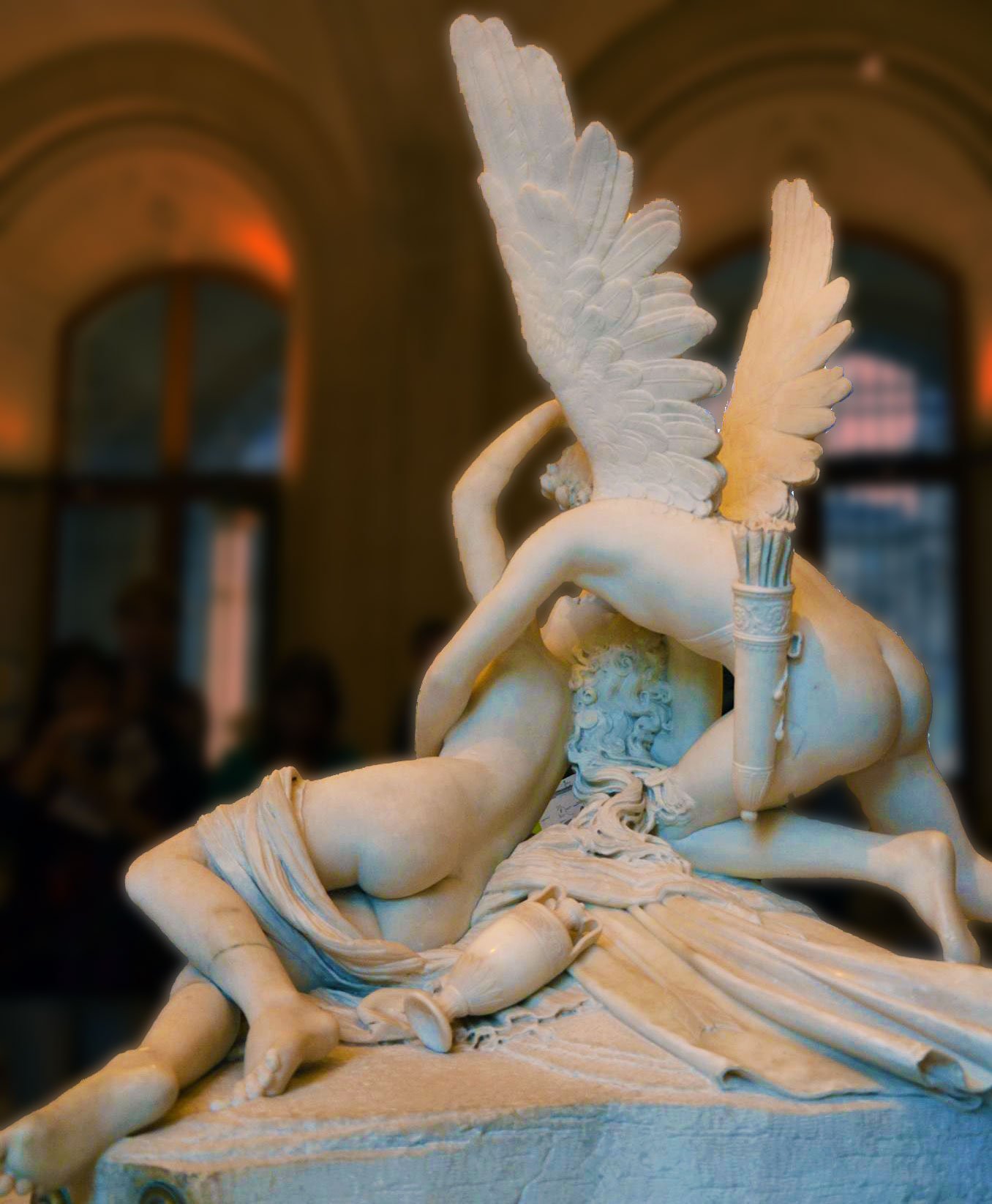 Copies of Eros and Psyche

Not everyone knows that there are several copies of Eros and Psyche, only two of which were made by Canova. The first is kept at the Louvre museum in Paris while the second is at the Hermitage in St. Petersburg.

Who were these copies intended for?

Eros and Psyche Was commissioned by the Scotsman Thomas Campbell. However, the group was soon bought by Gioacchino Murat and transported to Paris.

The second copy was instead commissioned by the Russian Nikolaj Jusopov, sent by the Russian empress to convince the sculptor to move to his court. The artist refused the job and remained in Italy but consented to sculpt a second copy which was then transported to St. Petersburg.

In addition, Adamo Tadolini, one of Canova’s best students, received permission from the teacher to sculpt other copies of Eros and Psyche. 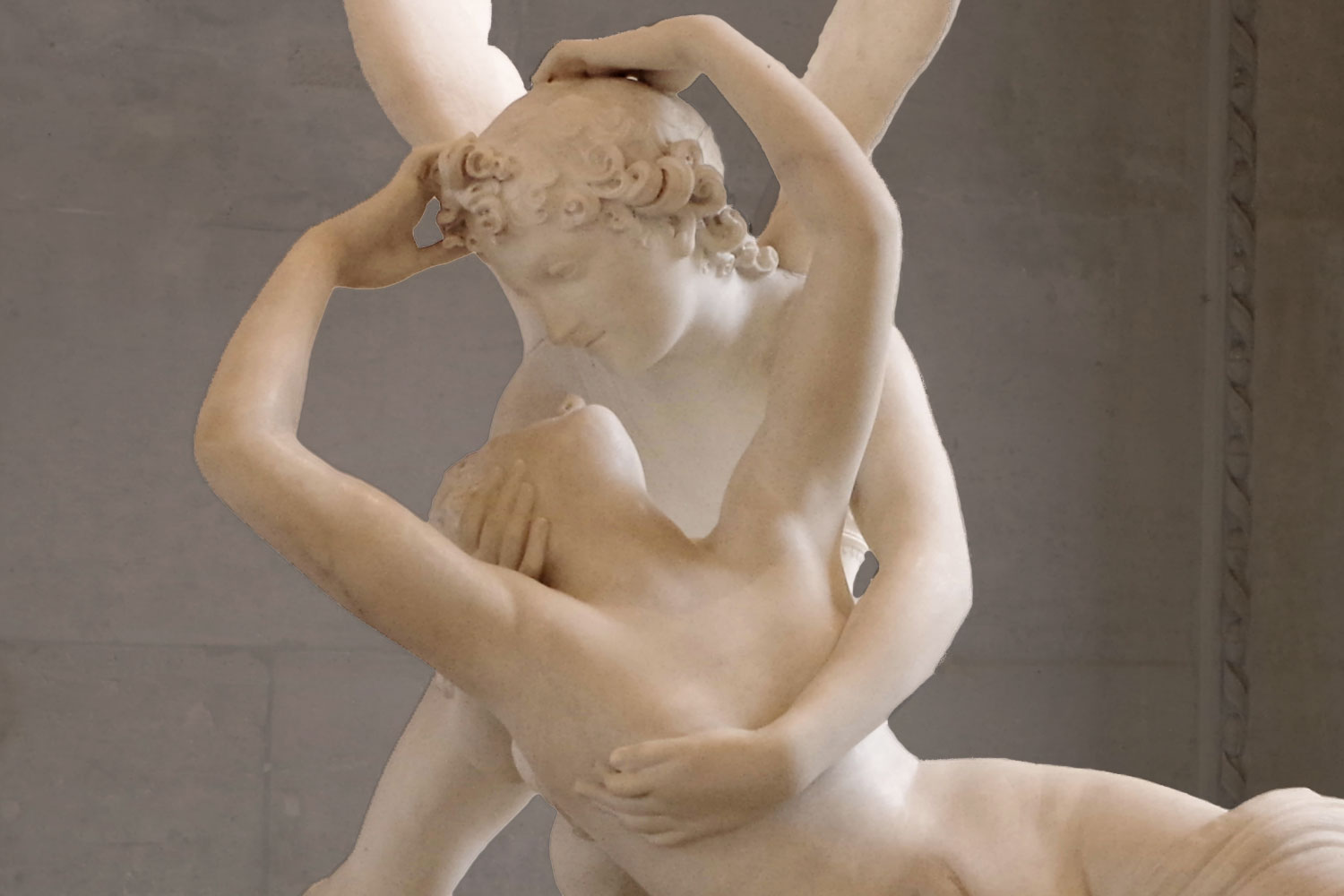 Love and Psyche: issues of color and size

The processing of “Eros and Psyche” surprised me for two reasons mainly. First of all the size: when you see it in the picture it looks very large and impressive while in reality, it is 155x168cm.

The second reason is that the marble seems alive so much that the meat appears soft. Stone is beautifully smooth and shiny as well as being very white.

In this period, in fact, the candor of the sculptures was exalted because it was thought that the ancient Greek statues were white: in order to imitate them, artists tried to make the stone as clear as possible.

Actually, we know that classical sculpture was on the contrary very colorful. Fortunately, Canova did not have the tools to know that the ancient statues were full of color pigments!

Skip the line ticket for the Louvre Paris