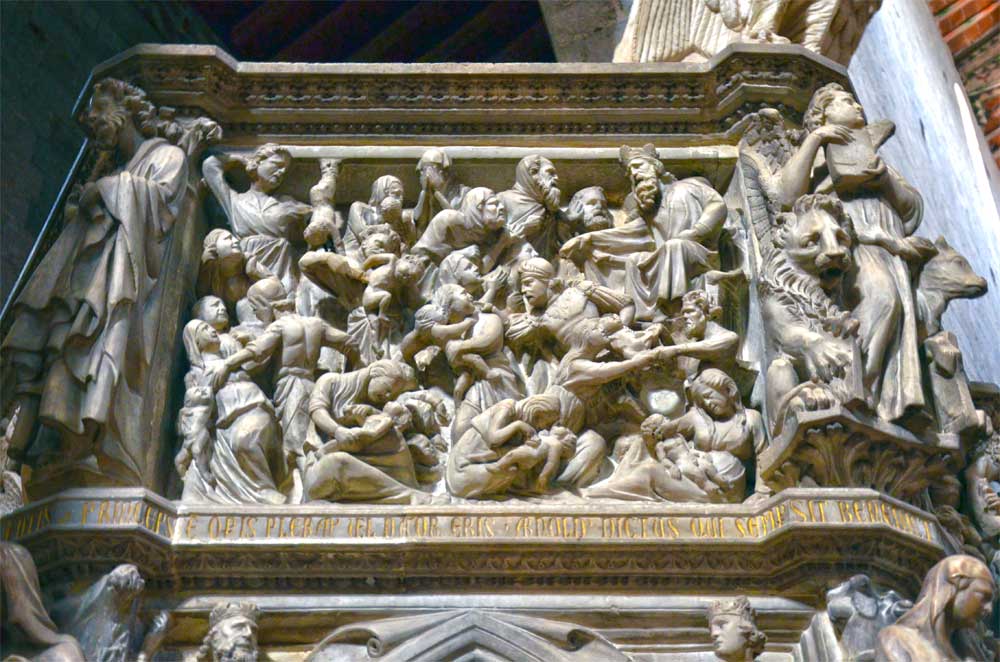 Did you know that the medieval pulpit of Sant’Andrea in Pistoia hides symbolic meanings and unique allegories?

His pulpit is one of the most beautiful sculptures of the Middle Ages.

Discover the symbolic meanings of the scenes that compose it and the allegories that make it unique!
Do you want to travel in Tuscany?

Do not let it escape!

The masterpiece of Giovanni Pisano in Pistoia

In the church of Sant’Andrea in Pistoia, there is a masterpiece of medieval sculpture: the pulpit by Giovanni Pisano. This work is at the beginning of the Renaissance, anticipating the times as much as the frescoes of Giotto in the upper Basilica of Assisi.

Today I bring you to discover its meanings, history and forms. 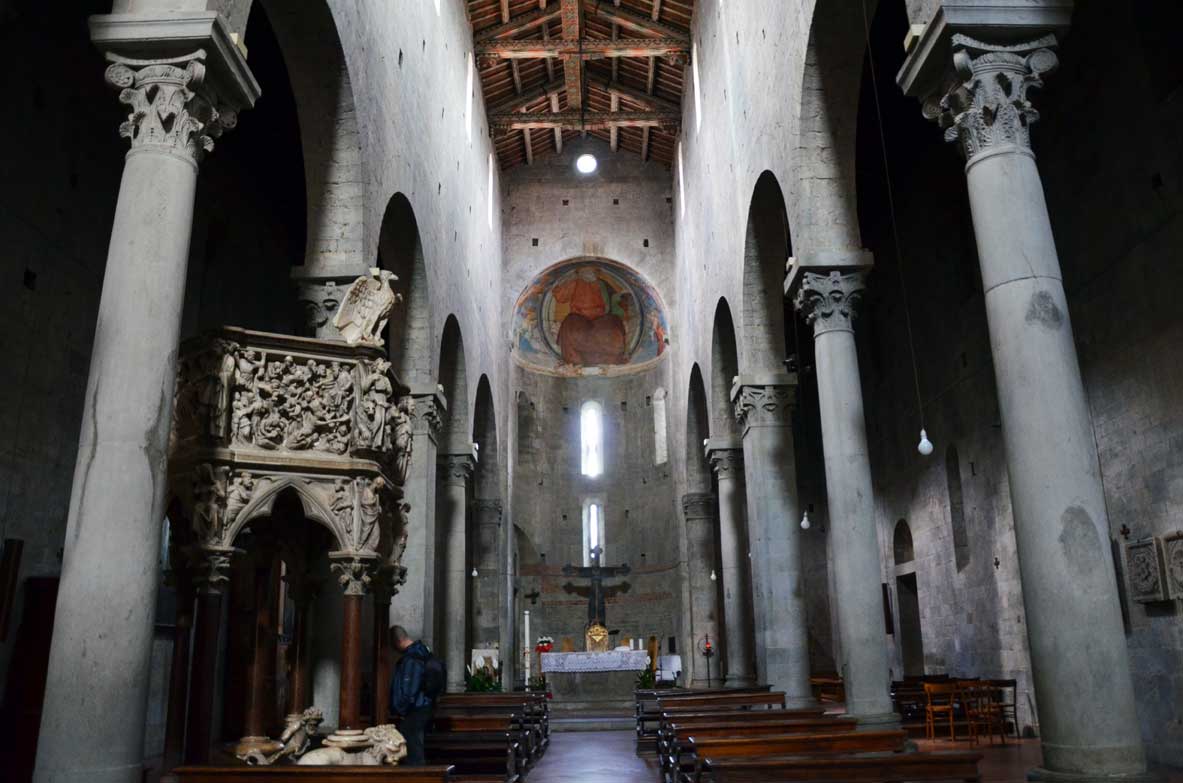 Giovanni Pisano’s pulpit in Pistoia: the church of Sant’Andrea

The foundation of this building dates back to the VIII century, but the actual appearance is due to the XII century architects. The facade has the typical two-colored marbles, very common in Tuscany between middle age and renaissance; it was projected by Gruamonte and Adeodato, that also sculpted the figures over the door.

The work that made this ancient church famous is, however, the pulpit by Giovanni Pisano, a masterpiece of the sculpture of the time. 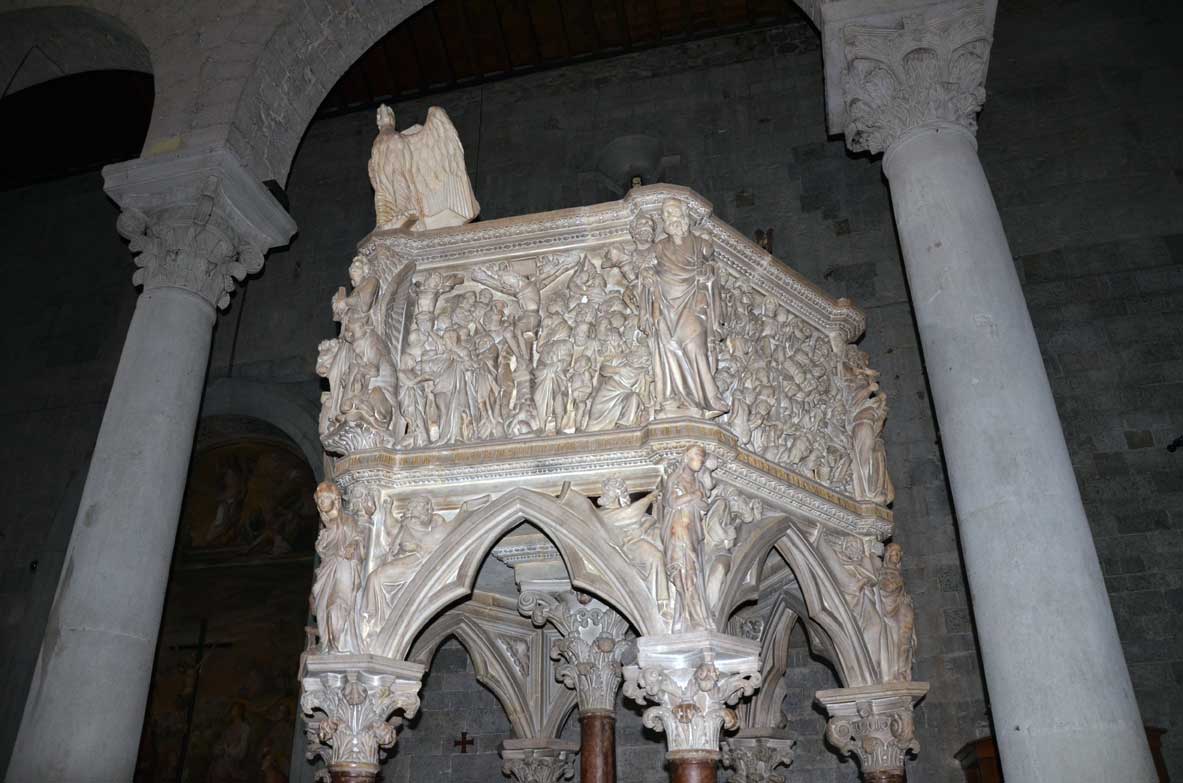 The deep symbolic meanings of Giovanni Pisano’s pulpit in Pistoia

Nevertheless, the artwork which made this church famous is the Giovanni Pisano pulpit, a masterpiece of 1301, that has deep symbolic meanings according to the medieval culture.

The base represents the truth of the faith, between the gothic archways there are the Old Testament characters and on the top, there are episodes of the New Testament. These three registers have a meaning too: three is a holy number, linked to the Trinity and the afterlife worlds, hell, purgatory and heaven.

Six columns hold this structure, and the seventh is in the center: some bases are decorated such as the one with Atlas, mythological figure that had to hold the world on the shoulders, and in this case symbolizing the sins that oppress the mankind; in another one we see a lion that nurses her puppy, figure of Christ that feeds the Christianity. The third base is decorated with a lion that kills a horse, symbol of Christ defeating the Devil. In the central column, there are an eagle, a lion and a griffin, that represent the death and resurrection of Christ and also the final judgment.

Between the gothic arches, there are sybils and prophets, to represent the old testament that is the “base” of the new one, that is directly over this figures. Effectively, in the last level, there are scenes of Christ life: the Annunciation, the massacre of the innocents, the most original and animated scene, the nativity, the worship of the shepherds, the crucifixion and the last judgment. 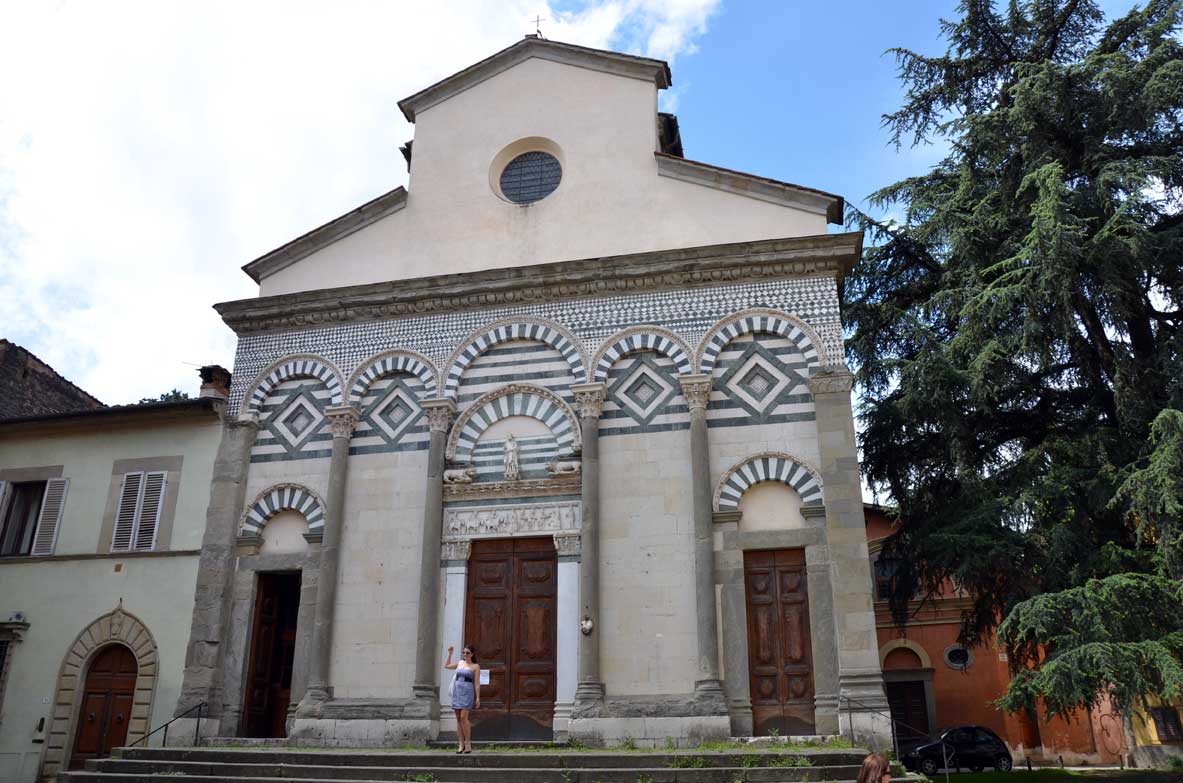 An absolute masterpiece by Giovanni Pisano

The great attention to the emotional reactions of the characters, in the mothers of the massacre of the innocent, but also in the Madonna of the crucifixion and the damned of the universal judgment, make this pulpit one of the masterpieces of medieval sculpture.

This work marks the point where Giovanni overcomes the art of his father Nicola, transforming his calm classicism into completely realistic scenes.

Comments on the Pulpit by Giovanni Pisano

Do you want to know more about this incredible work? Write me below in the comments, I will be happy to answer all your questions.

All offers for hotels in Pistoia